Story & Sound in the Underground 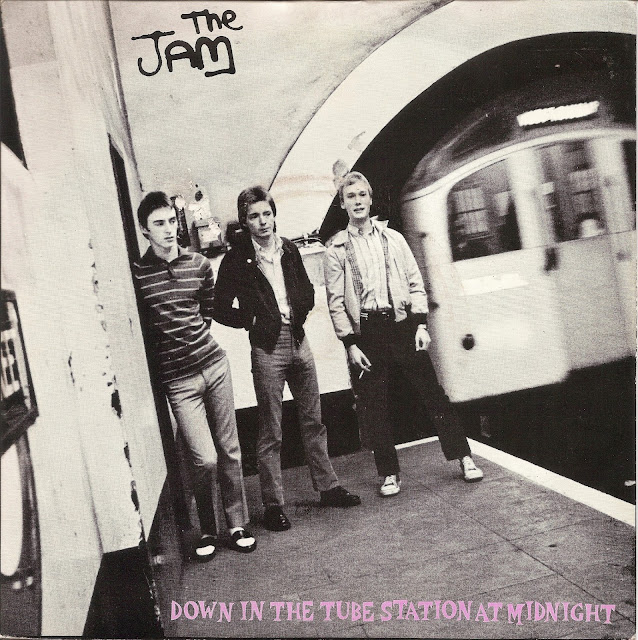 There are few rock and roll songs as grippingly cinematic as The Jam's "Down in the Tube Station at Midnight," released as a single in October of 1978, one in an astonishing run of Jam 45s from 1978 through 1980. ("Tube Station" reappeared a month later, with a "false ending," as the closing track on the band's third album, All Mod Cons.) Allegedly, Weller was displeased with the arrangement of this song that began life as a long poem (in Paul Weller: My Ever Changing Moods, John Reed states that it started as a play); with the enthusiastic support of producer Vic Coppersmith-Heaven, the band banged it into shape in the studio. (The single charted well, reaching 15 on the U.K. Singles chart.) I can't imagine how Weller could've improved the arrangement: the song is tense, evocative, and brilliantly-structured, and its yoking of sympathy and menace is so palpable that when I listen to the song now, over thirty years after I first heard it, I'm as moved as ever.

The story's simple: a guy ducks into the tube late at night, on the way home to his wife—he's picked up some curry for a late-night dinner—when he's approached by a group of guys who ask him if he has any money. He replies honestly ("I've a little") and they savagely attack him, beating and kicking him senseless. As he lies prone, suffering, he imagines his wife, who's likely just opening a bottle of wine, hearing the door of their flat opening and believing it's him—but the thugs took his keys as well as his money. What makes this story riveting are the details, the pacing, and the band's performance. Paul Weller sings the verses plaintively, perfectly capturing the unknowing innocence of the victim, as Bruce Foxton plays a syncopated riff on his bass that amps up the tension as the story unspools, as does a curious "heartbeat" thumping that sounds in the right channel throughout the record—the narrative of bodies inevitably colliding made physical. The chorus, composed only of the title phrase, barrels along, growing more desperate as the song plays, pummeling the well-chosen details in the verses, all riders' individual lives rendered as a noisy blur.

Weller's details are striking throughout. The station's ordinary, daily atmosphere, (the "glazed, dirty steps," the toffee wrappers), the other tube riders, newspaper headlines are all presented vividly. As is well known, as a teenager Weller made regular forays into London, a city he idolized, from suburban Woking, and brought along a tape recorder to capture the city's sounds. (The train in this song was recorded at St. John's Station.) Weller both adored the city and grimly recognized its racist violence, and his lyrics evoke that uneasy blend. Among the song's most infamous lines are the ones dramatizing the attack, and the victim's addled thoughts afterward:


I first felt a fist, and then a kick
I could now smell their breath
They smelt of pubs and Wormwood Scrubs
And too many right wing meetings

The last thing that I saw
As I lay there on the floor
Was "Jesus Saves" painted by an atheist nutter
And a British Rail poster read "Have an Away Day, a Cheap Holiday, Do it Today!" 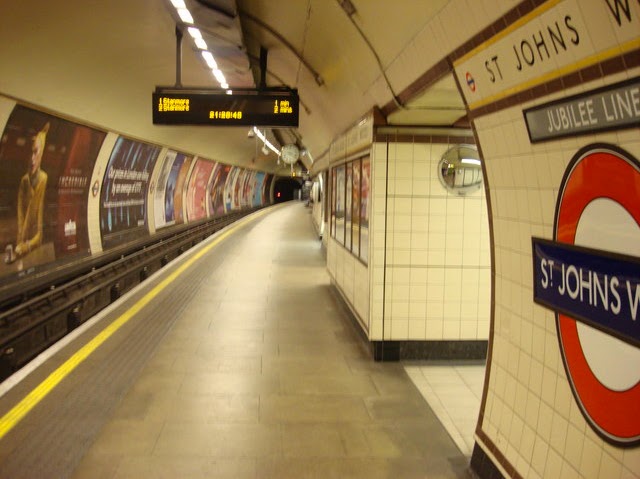 In a lesser writer's hands, the desire to commingle violence, suffering, atheist irony, and cheery tourism might've resulted in ham-fisted social commentary; yet Weller's cinematic details, hurried along by the band's playing, are heartbreaking, simple and devastating in their effect. (As for "Wormwood Scrubs," and other references unknown to me as a teenager, such as putting in the Queen and pulling out a plum, luckily my older brother was dating an English woman; problem solved! She became a go-to source for me as I puzzled over many a British band's references.) That said, Weller was only twenty when he wrote the song—impressive, certainly, yet in places his earnest poeticizing ("My life swam around me / It took a look and drowned me in its own existence") as well as the obvious foreshadowing of violence in the opening verse gives his naivete away. Yet that makes the song all the more charming: Weller's a young guy making sense of the pointless violence interrupting his urban idyll, recognizing that one can't exist without the other. He was preoccupied with violence on the band's previous single, and he's still writing songs reacting to this.

As powerful as the song is (it made for a staggering close to All Mod Cons) the band's live performances added fiery dimension to the story. I never saw the Jam live—a loss I'll live with forever—but recordings and videos attest to a stunningly powerful band producing enormously righteous noise. They recorded a gig at The Rainbow on November 3, 1979, and issued a version of "Tube Station" from that show (first on a double-pack 45 of "Going Underground" in 1980, and again the following year as the b-side of a West German release of "That's Entertainment.") Like all great rock and roll, the performance nearly collapses under its own urgency, the band playing so intensely that the song becomes far scarier, not to mention LOUDER, than the studio version, as if they're running to catch up with their own playing. The final third of the song startles: Rick Buckler's drum-pounding breakdown, Weller's slashes at his Rickenbacker, the crowd's clapping in pulse-racing unison, and the breathless crash into the final lines of the final verse remains, to my ears, one of the greatest, most urgent passages in recorded live rock and roll. If it's possible that innocence, love, fear, violence, and heartbreak can be rendered as pure sound, the Jam have done it here.

Email ThisBlogThis!Share to TwitterShare to FacebookShare to Pinterest
Labels: 1978, down in the tube station at midnight, live shows, narrative, rock and roll, story, the jam