A month ago in the New York Times Magazine, Jay Caspian Kang became the latest to weigh in on baseball's alleged decline. Taking on televised baseball, Kang argues that the increase, and now the norm, of high-definition broadcasts have altered the game's time (and, he claims in his main thesis, has killed off the Hollywood baseball movie, to boot).


Baseball, more than any other American sport, has an extensive visual archive, and the change in imagery—the sharpening of focus, the addition of color—always created a sense of progress across eras. Babe Ruth winks in grainy, flickering black and white. In the 1951 home run known as “the shot heard round the world,” you can see Bobby Thomson’s swing, but the camera that tracks the ball out of the park is so jumpy, unsteady and late to the trajectory that it looks as if it were shot on an iPhone by someone six beers in. Bob Gibson and Sandy Koufax come through in blurry, bright color, but you can rarely see their faces as they wind up and throw. By the 1975 World Series, when Boston’s Carlton Fisk seems to will the ball to stay fair with his flapping arms until it’s a home run, you can see the “27” on Fisk’s back and the square outline of his jaw, but the field still looks as if it were lit by mosquito zappers. Baseball nostalgia is tied to the way the game looked at any given moment in the past; the progress of the game is told, more than anything else, by the changes in its imagery.

Last week, I watched a replay of David Ortiz’s game-winning home run in the 12th inning of Game 4 of the 2004 A.L.C.S. It happened nearly 13 years ago, but it could have been last October, the way the scene was presented: the HD video, the score at the top of the screen, Joe Buck calling balls and strikes. We may be past the point when the only way to distinguish among coming eras will be by the change in uniforms. In terms of action and detail, the post-HD eras are likely to all look the same—our eyeballs can’t take in much more than what’s being beamed out to today’s 4K and 1080p televisions. Baseball’s visual clock, which once kept time for a changing country, now seems frozen. 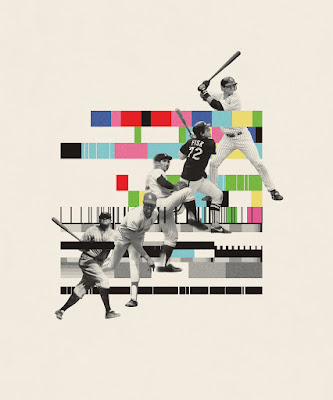 It's ironic that in a rapidly developing and changing time culturally, technology is effectively embalming televised baseball, cementing it in a future-now that will likely remain uniform for a while. On one hand, Kang's argument is an easy one to make: as technology evolves, things look different from one era to the next, but on the other hand he brings up something corollary but important. His argument is an interesting one, and I'm sympathetic to it: the level of detail and the "noise" of informational data common to high-def broadcasts and streaming has crowded out something essential in the game. Baseball has always been a statistic-driven game, but the SABR-led spike in data in the last decade or so has gotten very noisy. Much of the information is fascinating and illuminating—WAR and defense metrics, for example—but I can't be the only one who could care less about exit velocity or angle of home runs. I'm sure that the numbers are helpful to some, particularly those in the game, but I don't need it. It's clutter on a screen that's already mighty crowded. I'm reminded of Roger Angell many years ago asking Carlton Fisk if Fisk ever watches the replay of that epic '75 blast. Fisk claims that he hasn't, and doesn't; he wants to keep the memory secure and fresh in his imagination. It's becoming increasingly harder for one to do that and to duck the onslaught of data at the same time.

But that's alright. Like so much, I'll probably become nostalgic for StatCast in the distant future.

Meanwhile, baseball historian John Thorn has rounded up the heated responses on his facebook wall to Tom Verducci's latest.