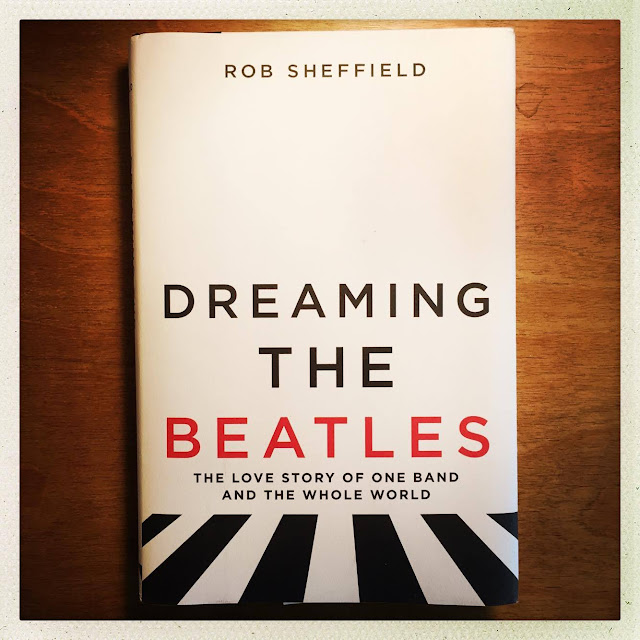 If you're a hardcore Beatles fan, you probably won't learn anything new in Rob Sheffield's Dreaming the Beatles: The Love Story of One Band and the Whole World, but that's the point: there are no new facts, and yet those facts keep renewing themselves generation after generation. Sheffield is the Platonic version of a Fan: geeky; supremely knowledgeable; biased; enthusiastic; grating; humble. His prose—which I've been reading for years in Rolling Stone, and other places—purely captures the bubbling, ecstatic mood of a bar or dorm room conversation among friends who are so passionate about their stakes in the argument that they'll go on for hours. But his conversational style misleads: this is a deeply smart, considered, and well-researched book, its brilliance originating in its essayistic approach, which originates in, and is given voice by, Sheffield's energetic talkiness. The scope of the ostensibly chronological Dreaming the Beatles staggers. Excitably, Sheffield connects disparate points in pop culture—Beatles songs to Hip Hop to politics to movies to TV, across decades, across continents—but rarely reaches too far, and when he does, I forgive, because that's one of The Rules in this game: you can fall flat as long as you gave everything you had in your running approach. Sheffield's appealing grin is practically visible above the pages of Dreaming the Beatles, and the engine that powers the book is Sheffield's amazed amazement, the deep joy and awe he feels, and expresses, when considering the infinite possibilities of the surprises that the Beatles, decades after breaking up, still give. His essays on the challenging, uneven solo years—Sheffield reminds us that the individual Beatles had to learn how to have solo careers, and couldn't lean on, and learn form, each other in a protective bubble as they did during the band's career—and on the Beatles' baffling renewals in the Eighties and Nineties are especially smart. The book's funny, too.

If you're an over-the-top, lifelong Beatles fan, as I am, reading Dreaming the Beatles is page-to-page delight—your smartest friend who's in a good mood, feeling generous, and is really on his game. I've already made room on my bookshelf to place it alongside Mark Lewisohn's The Beatles Chronicle and Tune In, Jonathan Gould's Can't Buy Me Love, and Ian MacDonald's Revolution in the Head. (I wish the latter author—yes, a bit of a Boomer finger-wagger—were alive to debate Sheffield.) Upon waking from Sheffield's dream, you begin to recognize where you differ with him. His tendency to drop in phrases and sentences from Beatles lyrics, insider joke-style, got too cute for me by page 20—in places it feels as if he's more interested in that gimmick than in the idea he's exploring—and his winsome, bubbly voice discourages deep reflection or consideration in more than one place, where a more refined justification might've helped; I stopped keeping track of where I agreed with him, with head nods and mental high fives, and where I wildly disagreed, my eyes rolled back in my head. Because, finally, Dreaming the Beatles is less about argument or persuasion, than passion and the surreal, trippy pleasures of grateful fanly reverie. There's a lot of room in there for both Yes and No.
Posted by Joe Bonomo at 10:48 AM