What do I owe? 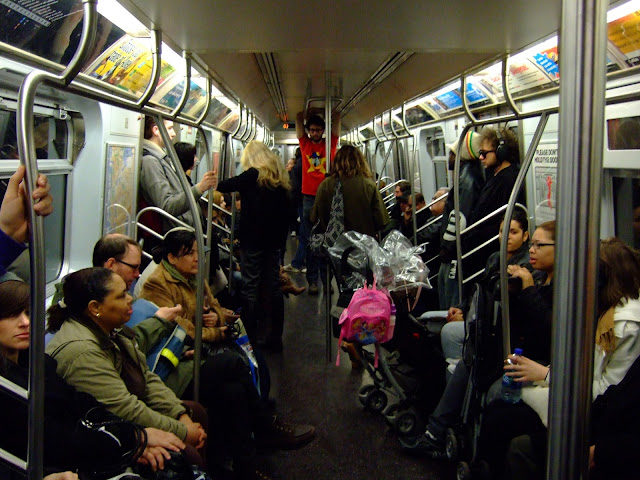 In her episodic memoir The Odd Woman and the City, published two years ago, Vivian Gornick offers vignettes of Manhattan life, interspersed with scenes with her longtime friend Leonard. Gornick's a native New Yorker and, thus, a native perambulator, and her book (after her earlier Fierce Attachments) is a lively addition to the long tradition of urban walking memoirs, and also features many passages on trains and buses. In one, Gornick describes riding a subway from Fourteenth Street to midtown. At the station, a man in front of her with an "elaborately folded-up baby carriage on his back" leads a small child to some seats directly ahead of her. "I plop down on the one opposite him," Gornick writes, "take out my book and  glasses, and, settling myself, am vaguely aware of the man removing the carriage from his back and turning toward the seated child." Then Gornick looks up.


The little boy is about seven or eight, and he is the most grotesquely deformed child I have ever seen. He has the face of a gargoyle—mouth twisted to the side, one eye higher than the other—inside a huge, misshapen head that reminds me of the Elephant Man. Bound around the child’s neck is a narrow piece of white cloth, in the center of which sits a short, fat tube that seems to be inserted into his throat. In another instant I realize that he is also deaf. This last because the man immediately begins signing. At first, the boy merely watches the man’s moving ﬁngers, but soon he begins responding with motions of his own. Then, as the man’s ﬁngers move more and more rapidly, the boy’s quicken, and within minutes both sets of ﬁngers are matched in speed and complexity.

Gornick's self-consciously embarrassed at her insistent gazing, and repeatedly turns away, but the two "are so clearly oblivious to everyone around them" that she can’t help looking up from her book. And then "something remarkable" occurs:


the man’s face is suffused with such delight and affection as the boy’s responses grow ever more animated—the twisted little mouth grinning, the unaligned eyes brightening—that the child himself begins to look transformed. As the stations go by, and the conversation between the man and the boy grows ever more absorbing to them, finger flying, both nodding and laughing, I find myself thinking, These two are humanizing each other at a very high level.

By the time we get to Fifty-Ninth Street, the boy looks beautiful to me, and the man beatific.

This passage gives me pause. On one hand, Gornick—who's no novice at interpreting subway drama—is describing a charged, epiphanic moment, of which she is the observer and the affected, a welcome, and perhaps rare, moment wherein the limits of her prejudices and biases are tested; on the other hand, she verges on sentimentalizing the boy's handicap and the older man's burden (and perhaps, in using the word "burden" I myself am ascribing qualities to the man he doesn't feel) by casting them as beatified messengers. What obligations, if any, does a writer have to the people she writes about? Does she take away their agency by describing them from a distance, however affectionately, and then publishing the account? Or is any responsibility mitigated by the fact that it's only her reality, simply her perspective, that she's describing? Her truth. As someone who on occasion writes about others, I'm interested in the answers to these questions, and to the degree that I'm ethically—if not aesthetically—bound to present a dimensional and fair a portrait of the people who happen to wander into my autobiographical writing. In his essential essay "Bride in Beige," Mark Doty writes that "beyond the personal ethics of memoir—how fair or unfair we are to other people in our lives—and beyond the matters of accuracy, there's a higher ethical standard, which has to do with the ethics of art: that what is made is commensurate with the real." What is "real" for Gornick on the train is the "remarkable" gift of unbidden, surprising grace that she witnesses; the actual details of the exchange as experienced from the man's and boy's point of views—and the difficulties, tragedies, and griefs they've likely experienced—aren't the issue. Should they be taken into account?

Reading this passage of Gornick's, I was put in mind of Michel de Montaigne's response at observing a conjoined child. Four centuries before Gornick rode the subway, Montaigne suggests a practical, humane way of seeing deformity:


Whatever falls out contrary to custom we say is contrary to nature, but nothing, whatever it be, is contrary to her. Let, therefore, this universal and natural reason expel the error and astonishment that novelty brings along with it.

Photo via Brute Reason.
Posted by Joe Bonomo at 11:26 AM