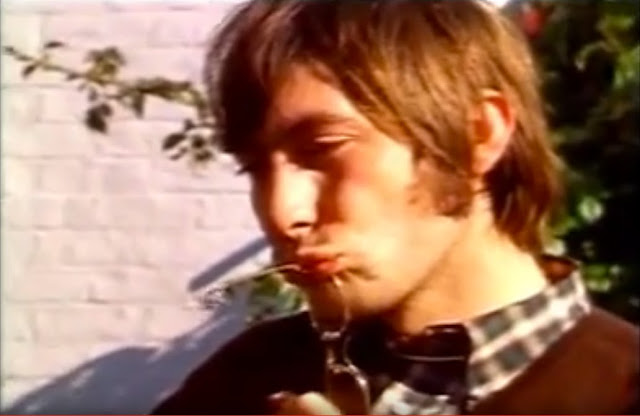 I discovered this terrific sit down with a typically thoughtful Charlie Watts, dating from the Spring of 1966 and apparently never broadcast. Context: the Rolling Stones' boundary-breaking "Paint It, Black" single and Aftermath LP have recently been issued, and the band will depart for a North American tour in June. The conversation was taped in Watts' yard on bright day, and his wife Shirley is seen atop a horse, and galloping about. Ruminatively chewing his glasses, Charlie holds forth on a number of topics, including the limitations of fame, Mick Jagger's and Keith Richards's growth as songwriters (their early demos "weren't very good"), particularly Jagger's increasing social commentary in his lyrics, jazz music, and show business.

He's particularly interesting when he discusses the Rolling Stones' and other U.K. bands' co-opting of  African-American traditions and sounds, and on racism, a word that neither he nor the interviewer use, but which is practically visible in the air as they speak. "It's very strange. That's another facet of America that you can't really understand is the Negro," Charlie offers.


When you get a version of "Long Tall Sally" by the Beatles sold half a million records and then you've got Little Richards's which is ten times better, selling three hundred copies...that sort of thing. It's just remodeling a thing and making it acceptable. And it's only acceptable because the Beatles have done it. And the same thing with us. We probably sold more copies of something like [pauses] "Little Red Rooster" than Howlin' Wolf ever thought of. But all we did was do our version of Howlin' Wolf's "Little Red Rooster." And yet it sold. It's a very funny thing. I suppose it's the wrapping they buy.

When the interviewer suggests that it's "mass media" that provides the wrapping, Charlie agrees:


Television's got to have something entertaining, something that's nice to look at, although it doesn't have to but that's what they put on it. And so Howlin' Wolf singing a song is not very acceptable as far as selling the record goes as some good looking white boy singing the same song, but it's got a totally different meaning. To them, anyway.

And about the relationship between pop music and sex, Charlie is predictably modest and buttoned-up, even nervous. What's sex got to do with sound? he asks nerdily, or knowingly—I can never tell with Early Charlie.

I don't know because I'm really quite a bit naive about things like that, because I don't really think of it.... I think it must play a part. But there again I should've thought that the Beatles would never get anyone out to see them anymore, since they're nearly all married. But, I mean, there you are, you see. So I really can't answer that, properly.... You can sing about "sexual intercourse" all night long and it wouldn't draw any effect. But if the person who's singing it has got one of those faces that women like, then he's gonna be a big success. [chuckles] You see, that's the funny thing about it. It really is only your face, which makes this sort of life to me a bit shallow.

Interviewer: How do you mean?

It's all very silly, you know. It isn't silly, it's just obvious, things like having a wash, really, just obvious things that go through people's mind, like you must eat, or something. So I suppose the sex thing is just an obvious thing which no one ever talks about but it must be there. But it just nauseates me a bit.