"We got the Detroit Demolition here for ya tonight" 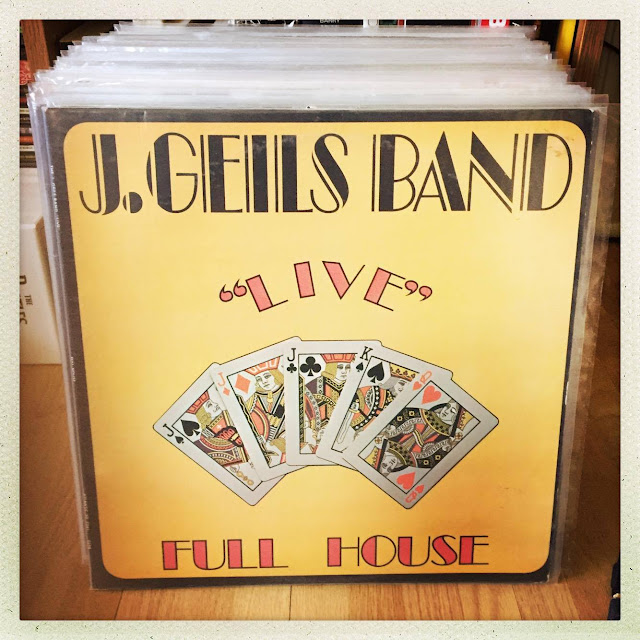 J. Geils Band's "Live" Full House was one of the first records I bought with my own money, joining a couple of KISS albums, Marvin Gaye's Trouble Man soundtrack, and the Rolling Stones' Goats Head Soup. I bought Full House at the long-long-gone Backstreet Records in Wheaton, Maryland, a short walk from my house. It's not an understatement to say that the album forever imprinted me. Every song blew me away—the band's tightness, ferocious energy, chops, humor, and sweaty, coiled looseness was everything I was looking for in the early 1980s synth-drum era but didn't know yet. (And, needless to say, graphically illustrated for me that "Love Stinks" and "Centerfold," however catchy, weren't great rock and roll.) The album foregrounds the band's four-on-the-floor R&R and grinding R&B, generally eschewing the jive shuffle and boogie that, for me, drag down too many of their studio albums of the era. Geils's muscular chords in "First I Look at the Purse," strutting riffs on "Hard Drivin' Man," electrifying lines on John Lee Hooker's "Serves You Right To Suffer," and grinning leads on the preposterously fun "Looking for a Love" ("Play your guitar, Clarence!") were epic and larger-than-life to my young ears. The album, edited down from two April 1972 shows recorded at the Cinderella Ballroom in Detroit, dramatized for me the reckless, joyous fun to be had watching a LOUD band in a sweaty, smoky club or venue. The album was likely tweaked in post-production, but such editing wouldn't have mattered to me then even if I knew about it. The lean but muscular Full House remains one of my favorite R&R albums and is one of the greatest live albums ever issued (stronger to my hearts and ears than the indulgent Blow Your Face Out from 1976 and slick Showtime from '82). As I wrote about the album in Jerry Lee Lewis: Lost and Found, a book about another insanely good live album, "I could nearly smell the venue, and Detroit in the early-1970s felt grimy and exhilarating."

RIP John Warren "J." Geils, whose righteous guitar playing on this and the other early J. Geils Band albums truly sent me.
(Apparently, Rhino Records has been sitting on a double-album, expanded version of "Live" Full House for seven years now. But where is it??")

If I had your gift, I'd've written something like this to describe my response to their self-titled first album...'tho I was 23 when I bought that one in '70. It was NOT one of the firt I bought with my own money. That honor goes to "Walk Don't Run" in '61

I just made a playful reference to a friend's wife, who is from Detroit, as the Detroit Demolition. Afterward, I decided to look it up and maybe pull up a soundbite to send (they're younger). I landed here and I thought I would just add that I saw the band in concert in San Diego in 1972. What a great show. I have many albums, but this isn't one of them - this was purchased during my 8 track years. Thanks for shining the light in my attic. - Mark

Glad to shine, Mark. Play those young kids some rock and roll!