Rain on the Window 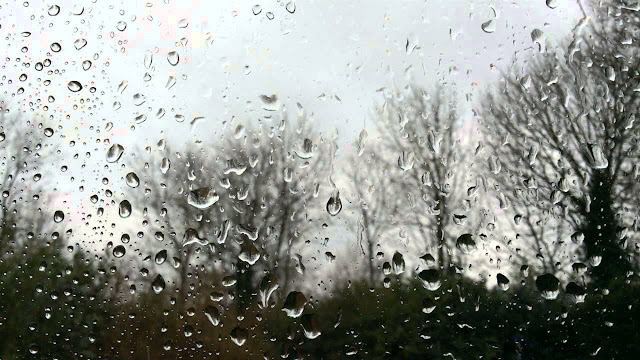 Although I cherish childhood memories of riding my bike all over Wheaton, Maryland, in and out of the dark green woods of Wheaton Regional and Sligo Creek Parks and zipping down suburban streets, and of shooting hoops in my driveway until dusk, I secretly loved waking up to rainy days. (Come to think of it, those activities are solitary endeavors.) My introverted side, there all along but succumbing to adolescent and, later, teenage pressures to remain hidden, embraced the damp, the closing in of gray all around, the outside world shrinking to something psychological, emotionally manageable to me. The politics of the playground and of after-school hangouts, the witnessing from the side of the stage, where I'd often drift, of Naturalism played out among pre-teens and teens, the chill in my chest when faced with acting out with others whatever identity I'd adopted that afternoon: all of these external dramas vanished, as in a magic trick, with the image and soft sounds of rain on the window. Now: I could spend an hour with a book, or with an album, or scribble a lousy poem or, more secretly, shamefully, a dirty story, or just be alone in my head where I was always the happiest and safest, unburdened with the need to be public. Even now as an adult, waking to a rainy day or the prospect of afternoon showers means a staving off of anxieties: yard work and its brutal character-building; certain social engagements; choring I've put off. How eternally childish is it of me to prefer a day that requires the rest of the responsible world to stall in its gregarious, forward-moving momentum; why should I revel in a day that others detest, or that makes the daily tasks of already-busy adults more difficult? If I'm always gladdest when the world slows behind a wet gray window, I may need to sift the childish romance of that from the more pressing notion that I'm falling short of being a grown up.