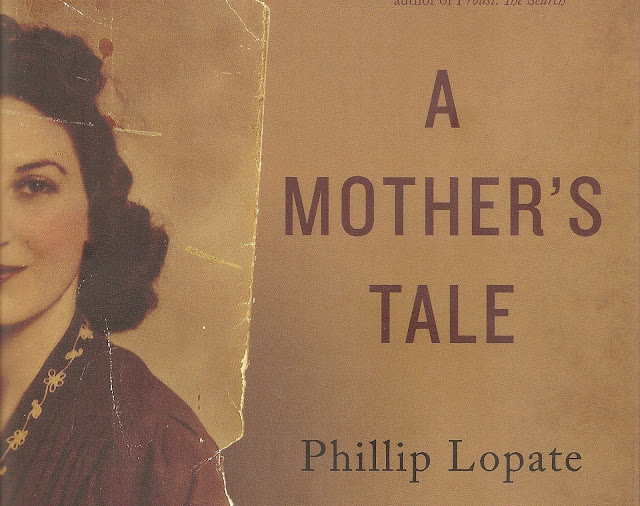 I've just finished Phillip Lopate's A Mother's Tale, and it's a doozy, a deeply weird but engrossing hybrid of a book wherein Lopate disentombs taped interviews he'd conducted with his mother, Frances, when she was sixty-six and he was forty-one. For personal and psychological reasons Lopate ignored the tapes for more than thirty years—he'd stuck them in his closet—but recently felt compelled to listen. His relationship with his mother, who died in 2000, was fraught and terribly complex; she was governed by a remarkable tide of bitterness inside of a vexed and unhappy marriage, and Lopate in no small measure defined himself both in sympathy with and in opposition to his mother for his entire life (and it's an ongoing process). In listening to and transcribing the twenty hours of taped conversations, Lopate faced both his younger self asking questions and reacting to, and often challenging and mollifying, his mother, and his present self (Lopate is seventy-three) making sense of a relationship that's in the past but which marks his daily life. The bulk of the book, perhaps too much, is devoted to passages of his mother talking—about her unhappy childhood, her early marriage and overwhelming distaste for her husband, her numerous affairs, her children, her odd jobs, and her late-in-life career as an actress and singer—as Lopate the questioner listens, occasionally responding or pushing back, and as Lopate the writer reflects on the whole, knotty process. For many pages Lopate simply lets his mother go on—and she could talk! and was a larger-than-life character—hopeful that, as she holds forth, complaining usually, her considerable personality will dramatize her life and her many, deeply-ingrained complexities and grievances. This becomes maddening in places, as Frances can really suck the oxygen out of a room, as her children can no doubt testify, and the reader's patience is tested as Frances often ignores her son's attempts to steer her away from solipsism—but that's also what I like about the book, that nerviness, that dare to the reader to put up with it all. That said, I would've liked more present-day Lopate in the book; when he does appear, the passages are marked by his characteristic skeptical reserve, witty intelligence, stabs at resigned wisdom, and clean and entertaining prose—what we Lopate fans love in his writing.

A Mother's Tale is quite unlike any other book that I've read, and for that I'm grateful. I'm fascinated by it. In a recent conversation with Kristen Martin at Literary Hub, Lopate was asked about the genre of his book. "I think it’s closest to a play," he said. "And I think it could be staged, in fact."


It does seem to me like a dialogue. Now some people think that dialogues have a relationship to essays, coming out of Plato or Oscar Wilde, and in any case, an essay is something that usually necessitates taking different parts of yourself and talking with each other. But I don’t think of it as essentially an essay, and I don’t think it’s a memoir either. It’s a bit of an oral history, because something that struck me a lot was how her own life was playing against the history of the times—particularly as a woman going through all of these periods.

Not an essay, not a memoir. A Mother's Tale does push at the conventional understandings of autobiography, in that it presumes that by listening in on a conversation—which is really, finally, what the book is and what the reader does—the reader can glean essential qualities from the participants, can hear in the back-and-forth, push-pull, personality-clashing of an intimate conversation between a mother and her son something personal, not merely private. On that score, the book succeeds. I do wonder on the confessional nature of the material Frances offers; she and her husband are dead, but Lopate's brother and two sisters are alive, and though much of what Frances unburdens herself of is unlikely to surprise the siblings, some revelations might, or at least go beyond the boundaries of what they would like to have been made public. Lopate doesn't state anywhere in the book that he asked permission of his siblings to publish these conversations. And the book thrives on that matrix of the private and the public: one son listening to his mother speak of family concerns in all of their joy and anguish, in so doing becoming a silhouette of sorts for any child on the long journey from son or daughter to independent adult, still weighted, always weighted, by the burdens of adolescence and of the family dynamic. I've long felt that America's greatest literary subject is the family—the way its definitions are challenged by evolving notions of gender and sexuality, the way the country's size encourages literal distancing and subsequent loss between and among family members, the way immigrant families are sometimes radically affected by assimilation, the way generations fight toward and away from clarity—and A Mother's Tale essays the agonies, secrets, pleasures, and complexities of family in a strangely idiosyncratic, necessary way.

Lopate recently joined his brother Leonard on the latter's WNYC radio show to discuss the book here.
Posted by Joe Bonomo at 12:35 PM