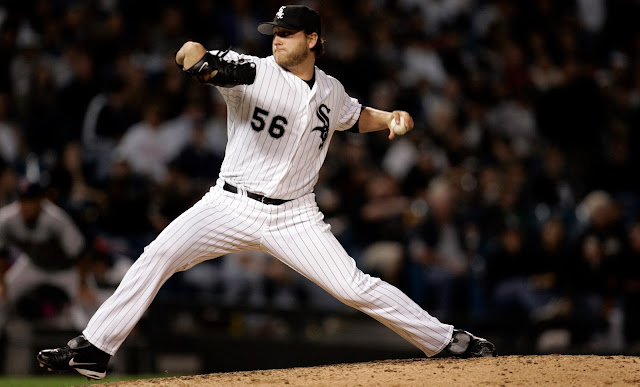 I hope that I'm not on the east coast on June 24 when the Chicago White Sox retire Mark Buehrle's number at Guaranteed Rate Field. I want to be at the commemorative ceremonies. I loved watching Buerhle pitch—he was swift, all-business, and as longtime White Sox pitching coach Don Cooper noted recently, he ignored the sex appeal of the dominant fastball (not that he had one, anyway) in favor of locating his pitches, changing speeds, and moving pitches around in the zone. Buehrle was one of those elite pitchers who somehow made it look easy; his famously short games—Cooper said you could schedule a dinner reservation the night Buehrle pitched without worrying that you'd be late—reflected a craftsman indulging his native skills, devastatingly potent when he was on, but never showy with his talent. He went to work. He dominated modestly, if that's possible. He was a magician at inducing ground balls, and every time he hit the mound you wondered if he might throw a no-no. He did, twice, including a perfect game. I saw him at work in the park a few times, but my favorite game might've been when he was pitching against the Sox. Two seasons ago in July, I made it to the park to watch Buehrle, pitching for the Toronto Blue Jays, square off against Sox ace Chris Sale, and the night lived up to the hype.

Buerhle slipped into retirement characteristically quietly after that season. "'I didn't want all the attention,' Buehrle said Friday on a conference call with Sox reporters—among his first public comments since leaving the game."

"That's why I haven't said anything. I haven't talked to anybody. I just kind of let it go. Hopefully one day it just kind of got forgotten, and five years down the road (people said), 'Where's that Buehrle guy? Is he still around?'"

Now he has to show up at the park for the team he pitched for for twelve seasons, and the Missouri farmer is dreading it. "Right now I'm just trying to not pass out from thinking I've got to get up there and do a speech," Buehrle said. "You think I'm joking. I'm not."

I bitter-sweetly enjoyed attending Paul Konerko's penultimate game for the White Sox in 2014, and Buehrle's return—with echoes of the sounds and the images of his 2009 perfect game bouncing all over the joint—would be something to see. He was beloved by Sox fans, and it would be nice to say goodbye officially. As I'm writing this I'm listening to Ed Farmer and Darin Jackson call the first Sox game of Spring Training—there's snow on the ground in northern Illinois after an impossibly gorgeous, warm week—and June still feels a long way off. I'm hopeful to be at Guaranteed Rate Field to say See Ya to a player I loved to watch, and who would likely receive the gratitude with a modesty befitting him.