Another Notable for Nolan 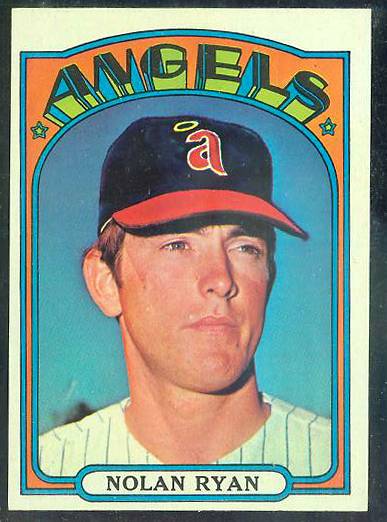 Every baseball fan knows the name Ron Bloomberg. If for nothing else, he'll be forever remembered as the first Major League player to bat as a Designated Hitter. On April 6, 1973, Bloomberg stood in against Boston Red Sox ace Luis Tiant, and drew a base-on-balls, his future on the back of baseball cards ensured.

A few days ago, I got to wondering who the last pitcher was to make a plate appearance in the regular season before the D.H. rule went into effect. I headed to trusty Baseball-Reference, and learned that there were five A.L. games on October 4, 1972, the final day of the regular season: Boston at Detroit, Texas at Kansas City, Chicago at Minnesota, Milwaukee at New York, and Oakland at California. I assumed that that lone West Coast game was the last contest to finish, yet I just as quickly realized that it could've been a day game. Baseball Reference didn't provide start times, so I was stuck. I was commiserating about this with my buddy Dan Epstein—who knows a thing or two about 1970s baseball history—and he provided evidence, via an October 4th Chicago Tribune previews listing, that the Angels game in Anaheim Stadium began at eight o'clock PST, and was indeed the final game of the regular season: 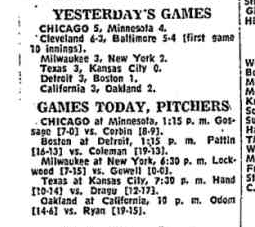 Nolan Ryan started for the Angels against the soon-to-be crowned World Champion A's. The game mattered little to the Angels—they were mired in second-to-last place in the West Division—and with 92 wins, the A's had locked up a postseason appearance. Ryan took the mound searching for his twentieth win of the season, and he pitched well, scattering five hits and surrendering an earned run in a complete game, his twentieth that year. He struck out ten—bringing his season total to 329—and walked three. Alas, the sleepy Angels hitters provided little run support. Ryan lost the game, 2 to 1.

History, of a sort, occurred in the bottom of the seventh, when Ryan came up to plate with two outs and an opportunity, however unlikely, to tie the game in front of those who remained of an announced attendance of 7,977. Down by two runs, the Angels had a modest tide of momentum going: right fielder Leroy Stanton started off the inning with a double to right. Leo Cardenas grounded to A's second basemen Ted Kubiak, moving Stanton to third. John Stephenson came off the bench to hit for catcher Jeff Torborg, and promptly grounded to first, scoring Stanton. The Angels were within a run of knotting the game, and who should step to the plate but Ryan, then hitting a robust .135. History being occasionally generous with poetic narrative, Ryan, of course, struck out. Inning, and mild threat, over. The last pitcher in the American League to bat in a regular season game was the future all-time strikeout king who'd pitch seven no-hitters, one of the most dominant pitchers of his or any era and a first-ballot Hall of Famer. He whiffed. Baseball is hard.

I couldn't find an image of Ryan batting with the Angels. This shot from the 1985 All Star game will have to do, incongruous Padres batting helmet and all. Ruthian, Ryan was not. 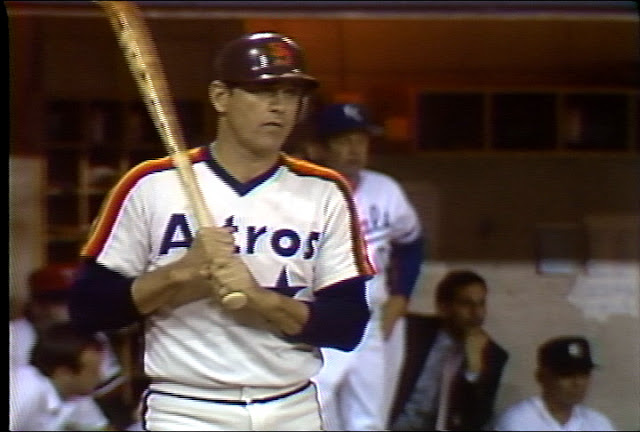