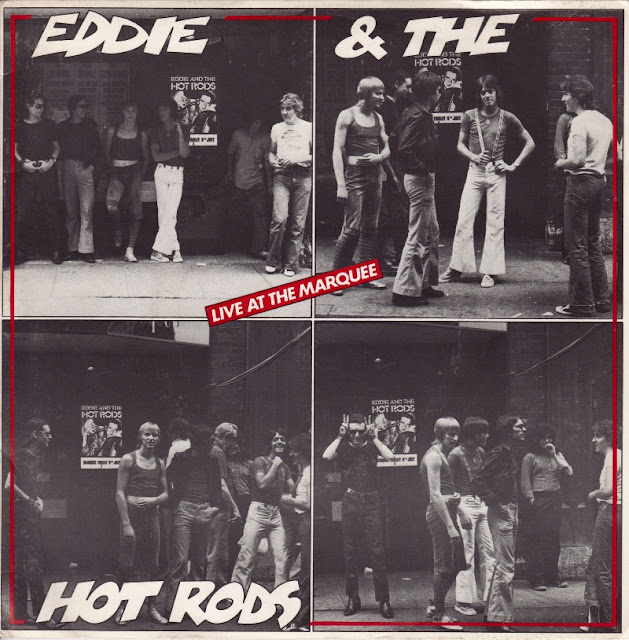 Rock and roll history is a long, sturdy bridge, elevated on sturdy pillars. The first bridge is hard to discern now—it's so far back there—and we haven't reached the end yet. A more accurate metaphor might be that same bridge in a thick fog; as history and biases and subjectivity lift, more and more of those pillars are revealed. Or, I'll just make it easy: Eddie and the Hot Rods were a great rock and roll band and they don't get their due. Usually categorized as a pub rock outfit, Eddie and the Hot Rods were a smokin' rock and roll band that made a handful of great records. Their EP Live at The Marquee was released on Island Records in July of 1976—from a mobile recording of a July 9th show—as the UK punk scene was roiling. Their version of "Gloria" segueing into "(I Can't Get No) Satisfaction" vibes off of the same nihilistic energy that the Sex Pistols let loose when, snarling, they attacked and upended the Monkees' "(I'm Not Your) Stepping Stone" a little while later. Earlier that year, the Pistols opened for the Hot Rods at the Marquee and smashed up the joint, and also the Hot Rods' gear; later, in the summer, the Hot Rods would alternate ear-ringing slots at the club with AC/DC.

This performance begins even before the song starts, when one of my favorite rock and roll moments occurs. Singer Barrie Masters, surveying the front of the stage, senses something not quite right, and then gets dismissive:


Move all these chairs, don't want 'em in 'ere! Get up, move 'em all. Can't have chairs in the audience, they get in the way. Get 'em out of here!!

The front of the room cleared for dancing, pogo-ing, and general slamming around, the band rips into "Gloria." It's a fantastic moment, and sounds epochal, practically historic: in eight seconds, one era ends and another begins. That's as long as it takes, sometimes. Feels that way this on this night, anyway. Sitting, that's finished; get up and jump around, 1977's almost here.

And listen to Masters—with Dave Higgs on guitar, Paul Gray on bass, Lew Lewis on harmonica, and Steve Nicol on drums, churning behind him—as he hollers "Satisfaction!" over and over at the song's close, so close to Johnny Rotten's heralding "No Future!" that it could be one transparency laid over another. The Stones roughed up. Pub Rock. Punk Rock. Rock and Roll. The tyranny of taxonomy. What's in a name? Clear those chairs and turn it up.

Email ThisBlogThis!Share to TwitterShare to FacebookShare to Pinterest
Labels: 1976, eddie and the hot rods, gloria, live at the marquee, live shows, punk rock, rock and roll, satisfaction, the rolling stones, the sex pistols