demanding and hopeful and desperate and lonely 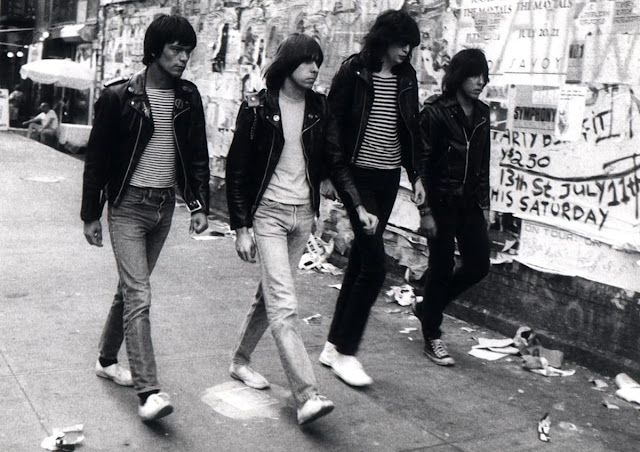 The idea of "perfection" in rock and roll is kind of counter intuitive: a great rock and roll song threatens to fall apart by the next measure, is played with, and against, a kind of desperation, no matter how fun and liberating it feels. Unless what you've built is built to break, then what you've built is imperfect. But we all know rock and roll perfection when we hear or feel or see it, usually measured in moments: a move to a bridge or chorus; a rawly, surprisingly transcendent solo; 45 reckless seconds in the middle of a song played by a bar band in Somewhereville on a Tuesday night.

The Ramones' "I Just Want To Have Something To Do," the lead track of their fourth album, Road to Ruin, released in the fall of 1978, comes close to my ears to achieving two and half minutes of rock and roll perfection. The song's about nothing and having nothing to do, so it's about everything, on that night anyway. The opening riff is downbeat and tense, suggesting an East Village tableau that's slightly menacing yet is all that's on offer, and we're only five seconds in. (The riff is a variation on the Dictators' "The Next Big Thing," released two years earlier.) The famous first verse—the song was written by Joey—lays out the stakes:


Hangin' out on Second Avenue
Eating chicken vindaloo
I was just wanna be with you
I just wanna have something to do tonight...

I love that he moves from wanting to hang with you, to just wanting something to do; there's a kind of acknowledgement that she might not come through, or be around, or want to hang with him. What's left? No matter that Joey was pushing 30 when he wrote the tune; this kind of desire to make contact is eternal, doesn't die with adolescence. "I Just Want to Have Something to Do" is one of punk rock's great melodramas, and I write that with great affection. In the chorus, Joey, against three chords, aches and climbs up into his vocal range, singing tonight tonight tonight in a poor-man's EV play-let; it's theatrical. The song gains great power in the gang-sung "Wait! Now!" passage—which could've been in the running as the song's title, too, come to think of it—and in the final 40 or so seconds, where the chorus is repeated against Marky's eighth-note bass drum kicks—a racing heartbeat brought upon by anticipation of something happening or by the drugs ingested to get something happening—and those stubborn chords, and as commenting guitar leads (likely played by someone other than Johnny; I could be wrong) howl and detonate all over it until the thing crashes to an ambivalent close. Producers Tommy Ramone and Ed Stasium recorded and mixed the band's dynamics superbly: crisp, punchy, with an ear tuned to hooks and radio drama. Great stuff. The final 40 seconds are, still, absurdly moving to me, still bring me to tears in its below-14th Street widescreen catching everything demanding and hopeful and desperate and lonely about adolescence and desire and kicks—not to mention about guys and girls. And it's one of the great rock and roll songs about New York City, too. Turn it up.

Email ThisBlogThis!Share to TwitterShare to FacebookShare to Pinterest
Labels: 1978, i just want to have something to do, punk rock, road to ruin, rock and roll, the ramones