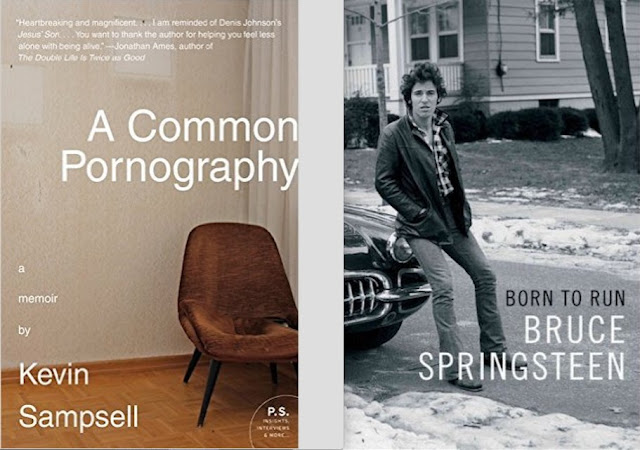 I love these two passages about music and adolescence, each capturing that blend of joy, mystery, fantasy, desperation, identification, and bittersweet reality that scored countless days and nights. The first is "Records," from Kevin Sampsell's 2010 memoir A Common Pornography: "Two plastic record players and a nice stack of Top 40 45s were all I needed to start my own radio station."


My plan was to do a pirate radio show that would broadcast to my neighborhood. Instead I just pointed my speakers out the upstairs window and hoped the sound reached the corner.
In ﬁfth grade I started writing really bad pop song lyrics. When I wrote something I thought to be particularly hit-worthy, I’d cut out a piece of paper in the shape of a 45, and then, after coloring in the black wax area, I’d put the name of my song on the “label.” Some of these hits were “Sound of Thunder,” “Rich Dude,” and “Diamond Girl." The name I gave myself was Billy Rivers, because I thought it sounded cool.
After cutting out the center hole, I’d string the smash hit to a hook on my ceiling. I imagined I was a megastar. Sometimes I’d even put them on one of the turntables and watch them spin. Forty-ﬁve revolutions per minute. Once I put a needle on one as it spun and ruined the needle. I had to go to the record store, where they sold little smoking pipes and stoner posters, spending my entire ﬁve-dollar allowance on a new snap-on needle.

The second is from Bruce Springsteen's new memoir Born to Run: "I always remember driving up the New Jersey Turnpike, and shortly before you reached New York, somewhere out in the industrial wasteland, stood a small concrete building."


There in the middle of the stink and marshes hung a brightly lit radio call sign. It was just a relay station, I suppose, but as a young tween I’d first imagined it was the real thing. That all my favorite deejays were crowded into this one cramped shack out here in Nowheresville. There, they were bravely pouring out over the airwaves the sounds New jersey and your life depended upon. Was it possible? Could this abandoned-looking little frontier fort so far from civilization be the center of your heart’s world? Here I dreamed in the swamps of Jersey were the mighty men and women you knew only by their names and sounds of their voices.