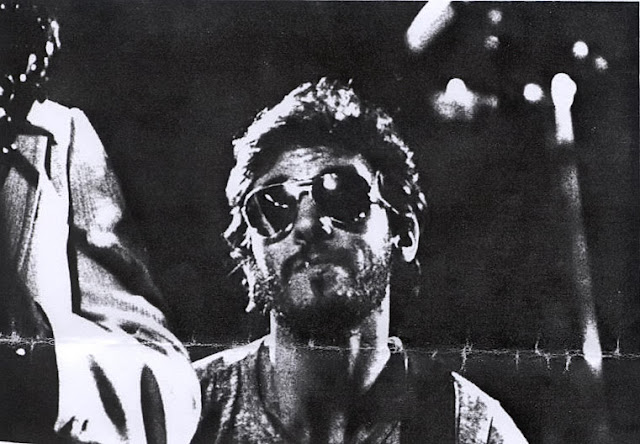 In Born to Run, Bruce Springtseen writes memorably about the genesis of his most famous song, on the way describing the appeal of rock and roll records made in the 1950s and 60s and what was turning him off about much of the early- and mid-70s popular music he heard, and to some extent wrote toward on his first two albums:


I wrote “Born to Run” sitting on the edge of my bed in a cottage I’d newly rented at 7 1/2 West End Court in West Long Branch, New Jersey. I was in the midst of giving myself a crash tutorial in ﬁfties and sixties rock ’n’ roll. I had a small table holding a record player at the side of my cot, so I was just one drowsy roll away from dropping the needle onto my favorite album of the moment. At night, I’d switch off the lights and drift away with Roy Orbison, Phil Spector or Duane Eddy lullabying me to dreamland. These records now spoke to me in a way most late-sixties and early-seventies rock music failed to. Love, work, sex and fun. The darkly romantic visions of both Spector and Orbison felt in tune with my own sense of romance, with love itself as a risky proposition. These were well-crafted, inspired recordings, powered by great songs, great voices, great arrangements and excellent musicianship. They were  ﬁlled with real studio genius, breathless passion . . . AND . . . they were hits! There was little self indulgence in the. They didn't waste your time with sprawling guitar solos or endless monolithic drumming. There was opera and a lush grandness, but there was also restraint.

We all have our favorites, but these three were likely in high rotation on Springsteen's turntable at West End Court:

Photo of Springsteen onstage at a dining hall at Dickson College in Carlisle, Pennsylvanis on Ocotber 20, 1974 via Brucebase.
Posted by Joe Bonomo at 9:48 PM