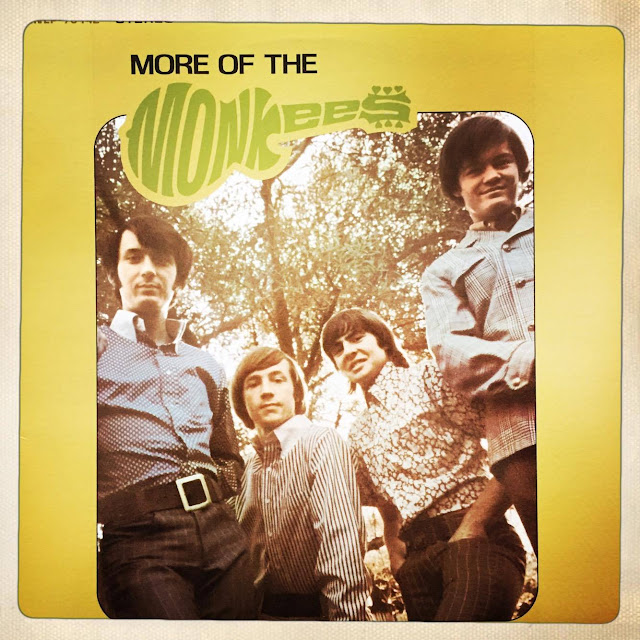 . . . . I thought that the lines in "She" were "She devoured all my Sweet'N Low / Took all I had and then she fed me dirt / She laughed when I was crying / It was such a joke to see the wafer" and when you're a kid stuff like that just gets inside and you don't try to make too much sense of it but on the playground at Saint Andrew the Apostle I still couldn't get my mind around sugar substitute and Communion wafers in the same song then the fourteen-bar middle comes in and all I think about is how cool that song-within-a-song is until those lyrics about a girl who needs someone to walk on get inside too and things get complicated again like the beautiful counter melody in "When Love Comes Knockin' (At Your Door)" that told me that the music alone can stir things made double fun when "Mary, Mary" kicked in and now we're just dancing down in the basement no worries about whether I understood "love" and how the girls were looking at other guys with a secret language that the album seemed to speak then the weird Greek vibe in "Hold On Girl" more dancing against adolescent blues before "Your Auntie Grizelda" arrived for an always-welcome hilarious visit even though we knew that Tork was aping Ringo the song was a blast and we'd turn it up even better because my mom would close her ears whenever the song came on and though the drum fill at the organ break in "(I'm Not Your) Steppin' Stone" was all the grinning excitement we'd ever need it was still melancholy because we knew that side one was over that we'd have to flip it and hear "Look Out (Here Comes Tomorrow)" a throat-tighteningly sad song and though I was light years away from the problem the singer had the chorus sang my own dread of going back to school on Monday and facing classroom and playground sadness so preoccupied was I that I barely listened to "The Kind of Girl I Could Love" it sounded country and out of place anyway but is there anything better than hooting with laughter to bring you out of your indulgent melodramas because oh boy here's Davy Jones cracking us up with "The Day We Fall in Love" too corny and hilarious for words though again we were years away from understanding the reality behind the schmaltz but those syrupy strings! and then again the magic of pop music as we go from laughter to childish introspection the melody in "Sometime in the Morning" so gorgeous and lyrical and melancholy that I almost couldn't take it and sometimes listened the other way to get through it all knowing that "Laugh" was coming a kind of how-to manual to get through Monday that helped even though we somehow knew that it was forced but not "I'm a Believer" came on the uplifting pop perfection of which soothed the hurt that the album was over so let's flip it again . . . .

Percentage of words in this post that I knew/understood when I was a kid listening to More of the Monkees? Maybe 8. Percentage of the album that I understood then? 99. (That "Sweet'N Low and wafer" verse always threw me.) Boyce, Hart, Sager, Sedaka, Nesmith, Goffin, King, Diamond and the rest of them out in Hollywood with those wonderful seasoned session musicians scored my mornings, afternoons, and evenings. Timing is everything in pop music: you too have an album or a song that got into you before you could speak it and that soundtracked your day.