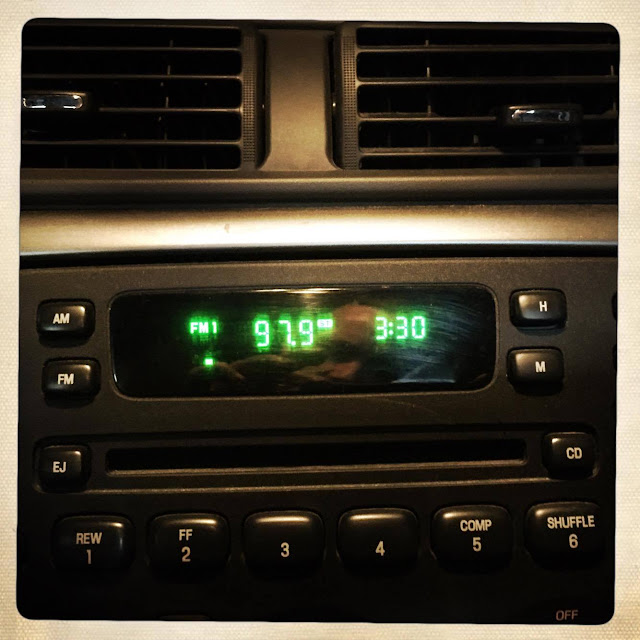 I drive a car of a certain vintage. That is: no satellite radio. When I tire of Spotify or my iPod, I like to start at the far left of the dial and hit the "seek" button, then stay for only a moment on each station, judging in the split-second whether or not I want to linger (I ignore the call numbers). I've done this in every car I've owned, starting with my 1972 Datsun and its push-in radio buttons. Usually, the trip from the left to the right is a quick one, mostly unwelcoming squibs of synthesizer blasts, whether it's All-Spanish or Top 100 or New Country. Occasionally I'll land on an oldie, although those stations don't seem to be around in abundance as they were in the 1970s and '80s, or anyway, seem few and far between in northern Illinois—more precisely DeKalb County, where I can barely receive most Chicago stations clearly. I recognize that this is an archaic practice, and quickly expiring; my next car, which I really have to purchase soon, will come with satellite radio and all of the 21ct century achievements in sound and efficiency that my late-20th century car lacks. I think that the static-filled pop song on a car radio is this era's melancholy signal, how even a song that is coming in clearly can fade by the end of the block or the next light. There's something—well, analog about it, and air-y, and of the elements. I'm reminded that I'm driving on earth when a song fades on terrestrial radio: I'm moving away, or toward, A to B. So last century.

Today, playing while driving home from the Y, I heard a startling burst of bagpipe and rough guitar. AC/DC, of course! "It's A Long Way to the Top (If You Want to Rock n Roll)" muscled its cocky way through the static over 97.9 FM The Loop, "Chicago's Classic Rock" station, but even Bon Scott couldn't keep the song from fading away before I got home. A couple of weeks ago, I received a nice lesson in irony, when on 95.3 FM—The Bull, a Rockford, Illinois country station—Trace Adkins's "Honky Tonk Badonkadonk" played (loudly, but the wall-to-wall noiseification of radio is another issue for another time) and then segued into The Band Perry's "Comeback Kid." (Both of these songs I had to look up when I got home.) What caught my attention was the friction between the two when played back to back, Adkins's stupid, clichéd sexism and unimaginative objectification ("There outta be a law / Get the Sheriff on the phone / Lord have mercy, how'd she even get them britches on," and so on) dovetailing brutally with The Band Perry's sincere, brave-woman victory song: "They like to kick you when you're down / They like it better when you're there on the ground / And up 'til now I've never made a sound / I bet they never had a broken heart / But they sure know how to beat the hell out of one / Sometimes I think they do it just for fun." I'm not certain that Guy Smiley behind the studio mic was aware of the irony afterward; he just plowed through to the next commercial announcement. But it was something. A bit of real life caught on the radio dial.
Posted by Joe Bonomo at 4:11 PM