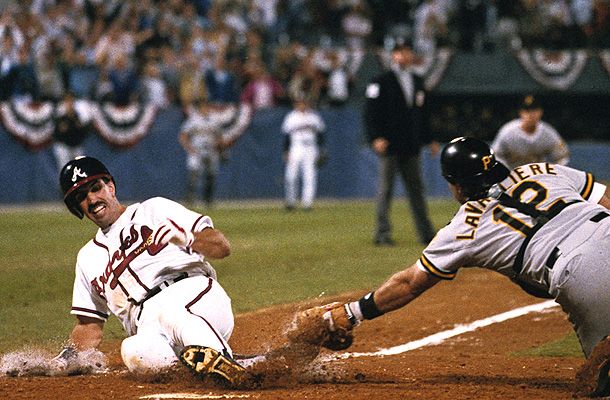 As Game Three of the Cubs and Indians World Series resumes tonight, I'm looking back at a gap of missing Octobers. After the 1981 World Series I drifted away from baseball for much of the following decade, turning my attention to books, school, girls, music, and drinking, not necessarily in that order. My interest revived during the amazing 1986 World Series (regrettably, while the Game Six drama played out I was in the studio at WMUC on the campus of University of Maryland, horsing around during a friend's on-air show) but it wasn't until the taut and epic '91 Series that I returned to the game for good. Yet another thrilling invitation came in the form of Sid Bream sliding across home plate in the deciding game of the 1992 National League Championship Series, sent from second base courtesy of Fransisco Cabrera's hit, beating Barry Bonds's throw by inches, and shredding CBS announcer Sean McDonough's larynx. I jumped up and down in the front of the TV that night like I hadn't done since watching Graig Nettles's and Bucky Dent's heroics in the late 70s. I haven't missed a season since, my love for the game and its history only deepening.

So here's to Bream's huffing and puffing, an October moment for which I'm eternally grateful.

Apologies to Pirates fans of a certain age: