Truth be told, the Mariners put good wood on Sale for much of the night, lifting several long fly oits, banging loud doubles off of the wall; Franklin Guitierrez smacked a homer in the second. The Sox didn't help Sale much against Fernandez, with Todd Frazier and Avisail Garcia each running into outs after being caught off first; the Sox loaded the bases in the 8th, but J.B. Shuck was forced at home via a nifty play by Mariners third baseman Shawn O'Malley, and Jose Abreu popped up in foul territory to end the inning. Hernandez, with his square shoulders, thin legs, and high socks, struts on the mound regally, overseeing his denizens, befitting his nickname. He was pissed at himself for walking Eaton and juicing the bases, but is there any American League pitcher who pisses off batters more than Sale? He struck out fourteen last night, and at least a half dozen of his victims spun away from the plate and stalked back to the dugout trailing baffled fury behind them. Sale's sliders, when he kept them down, were untouchable. More than once he kicked the dirt around the mound, staring down impatiently after dealing yet another devastating slider strikeout, and I have to wonder if the Sox offensive ineptitude is getting to him.

As always, I enjoyed watching Jose Abreu. When seen up close from the along first base line, he gives the impression at the plate of a poised alley fighter, cornered but confident, ready to strike, his back leg tapping the ground for timing and power. Alas, his feeble first-swing pop up in the eighth was deflating, and—something you don't see on television—he stood at the plate in quiet disbelief for what felt like a minute, before picking up his bat and trudging to the dugout to grab his glove, the personification of dejection, It's been that kind of year. Mariners' reliever Edwin Diaz's pitches hit 100 on the radar gun in the 9th, and the Sox were finished. 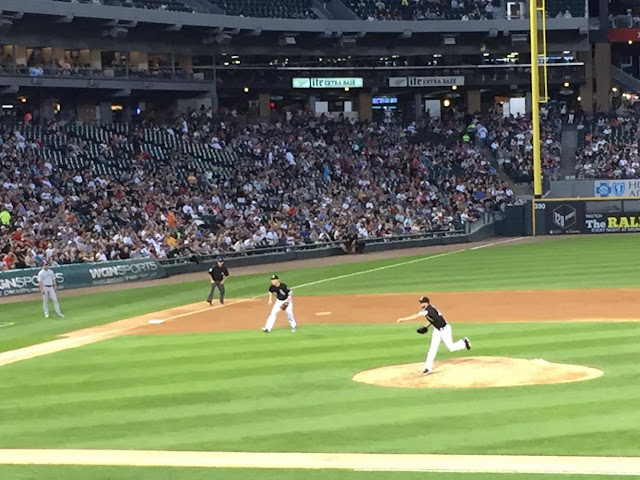 I have to admit, with mild embarrassment, that that 8th inning crushed me, and I childishly brought the disappointment with me out of the park. Driving west along Pershing Road, past crumbling blocks of enormous, empty warehouses and abandoned store fronts, churlish at the amount of money US. Cellular Field again soaked me for, I questioned my fanly allegiance to the White Sox, a team that I adopted, a team that's been "mired in mediocrity," to quote General Manager Rick Hahn, for years. The empty, sour-yellow blocks did not lighten my mood, and of course it began to rain. But by the time I turned on Western Avenue, I was able to objectively admit that civic disrepair has nothing to do with baseball, that I'd been more than a little precious. It's silly what a game can do to me, how watching millionaires play can haul me from literal edge-of-seat excitement to glowering disappointment. The ride home to DeKalb and lots of Stones on the iPod helped, and I burdened Amy with my blues less than I might have. I'll go back before the season's over, and submit again to the absurd fun of it all.

I don't have a baseball example (I WISH) of sports results affecting/effecting one's mood/attitude; but I do notice that NO matter how crappy my day gets, or how pissed off I am at the state of the state lately, I glance over at my Cleveland Cavaliers NBA Championship banner (of which Chicago has hada "few";^), and at least some, if not all of my mood passes a bit more quickly. And it IS a revelation, that we ACTUALLY did the deed, and it ACTUALLY makes me feel better.
So THIS is what it felt like to be a Bulls fan all those years. SURE WOULD BE NICE to feel this way FOR THE NEXT FEW YEARS.....nahhhh, never happen ;^)