The world lost a terrific, idiosyncratic, and wise music writer when Ian MacDonald committed suicide in 2003. I was introduced to MacDonald by his powerfully persuasive Revolution in the Head: The Beatles' Records and the 1960s, among the greatest books of Beatles criticism. The book has many detractors—some roll their eyes at MacDonald's over-confidence and overly subjective approach; others (including Paul McCartney) have cited errors in his musical analysis and a presumption on the author's part to know more than he can about the members' private motives. Be that as it may, on the level of the sentence alone, Revolution in the Head has few competitors among Beatles criticism. Elegant and sophisticated, MacDonald's prose feels finally like earthy, highly articulate conversation, issuing from a smart guy eager to communicate and engage, not to dazzle and lecture. His writing is highly figurative, employing eye-opening, effective metaphors in virtually every other sentence, and his ability to characterize the songs' moods startles me every time I read the book, which is often. He's especially perceptive on the aesthetic and psychological differences among Lennon, McCartney, and Harrison, and how those differences are reflected not only lyrically but musically.

Above all, MacDonald cared deeply about popular music (and classical and the plastic arts, too, under different hats), and understood intuitively that music has scored the lives of millions and is freighted with personal and cultural value. That affection and seriousness of purpose are born out in The People's Music, published just prior to his death, a book that took me far too long to get to. A miscellany, collecting pieces that MacDnald wrote about mostly 1960s and 70s pop, rock, and R&B musicians and bands for Mojo, Uncut, and Arena, and other U.K. magazines, The People's Music showcases MacDonald's wide-ranging knowledge and taste and his personal style. He's beholden to magazine journalism's economy of space, and so doesn't stretch out as he does in Revolution in the Head, to amazing results, but, forced to three or so pages, as many of these pieces run, he's cogent and focused. (The exception here is "Wild Mercury: A Tale of Two Dylans," a lengthy, fantastic essay on Dylan's interior demons and conflicts, and an equally great and ambitious piece on Nick Drake.) And MacDonald never loses his voice, and he's never afraid to lead with acute, sometimes devastating observations, as in this, on late Cream:


The rest, while undeniably passionate and crushingly powerful, is aesthetically grotesque: a blazing blue furnace of crude banality blown into megalomania by a zillion watts of electricity.

Or this, on Pink Floyd's post-Syd Barrett music:

Whether you agree with his arguments or not, MacDonald doesn't care; he trusts his ears and his heart and his grasp of historical context. His forthright critical reconsideration of Marvin Gaye's vexed and ultimately tragic career is characteristically part affection, respect, and frank disappointment:


Without delving into deep waters, it seems likely that Marvin's problems boiled down to what medieval divines once condemned as the sin of acedia, or spiritual boredom. His restlessness, even when it led to drug-frazzled rages, was basically inert, characterised by drift. In his recent biography, Trouble Man, Steve Turner suggests that Gaye manoeuvred his father into killing him — one of the most deviously passive methods of suicide ever contrived. It's hard to avoid the conclusion that the same passivity mars much of his music. What other artist, after all, spawned so many half-finished or abandoned projects? 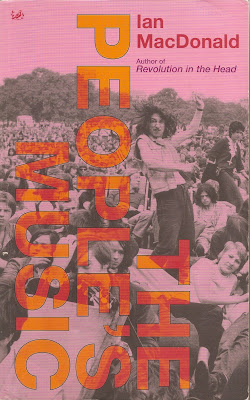 
Gaye's break came with 1971's What's Going On, a record which, while piously elected to the upper echelons of every top 100 albums list, is nevertheless pervaded by an underlying torpor more obvious in his later work. The sound and structure are undeniably original, if samey and repetitious; his ‘political’ lyrics, on the other hand, are trite and often mushily wishful. What's Going On offers as many vague gestures as ﬂashes of talent, its classic moments failing to disguise that Gaye, while gifted, was mainly extemporising off the musical initiatives of his collaborators.

A basic lack of commitment left Marvin susceptible to sentimental dishonesty. His assertion, on the title track of Let's Get It On, that ‘we're all sensitive people’ is true to the extent that few of us are completely impermeable, but risible if taken to mean that we're all equally perceptive and caring about each other. An observant man capable of watching himself washed to and fro by his conﬂicting desires, Gaye must at heart have been aware of the emptiness of such stuff....


Marvin Gaye was a beguiling voice worth hearing even when spinning vocal and lyric clichés or effectively singing about nothing at all — which covers a large tranche of his career. The supine coke-fuck aesthetic that governs much of his work will strike future listeners as decadent or prophetic, depending on how history proceeds. More certain is that the lushly listless drift of posthumous issues like 'Walkin' In The Rain’ and ‘Just Like’ accurately represents their creator's inner world, wherein ecstasy, melancholy, and ennui were twined in troubled complicity.

His takes on Lennon and McCartney, the Stones, Chic, the Supremes, Randy Newman, Laura Nyro, the Beach Boys, Lenny Bruce, Love, Simon and Garfunkel, Miles Davis, and many others are equally candid, concise, smart, and stylish (if, admittedly, not always blazing ground that others haven't covered). There is throughout MacDonald's work the idea that it's been all downhill, culturally and artistically speaking, since the 1960s, that we live in the 21st Century in a soulless, anti-spiritual, materialist, soul-murdering, metronomic sheen of shallow posing, and at times this worldview, which couldn't have been softened by MacDonald's ongoing clinical depression, leads to rather large generalizing on his part. To wit: "In today's pleasure-seeking world, introspection holds no appeal and the sixties' focus on innerness is ignored or derided as a cover for nineties-style chemical hedonism. The truth was otherwise in 1965-9." The title essay is especially crabby; among other complaints, he asserts that no contemporary artists are worthy of biographies the way their mid-century predecessors were! But such overstatement issues from the deep care that MacDonald took in writing truthfully, as he saw it. His sincerity and fierce intelligence suggests that he may have been a prophet of sorts, with whom the rest of will have to catch up. If you care about thoughtful and passionate takes on culture, pop music and rock and roll, and love great sentences that hum with conviction and authority, I recommend you read some Ian MacDonald. He left us way too soon.