In March, I quoted Chicago White Sox pitching coach Don Cooper on his hope that starter Carlos Rodon might be more consistent throwing early strikes this season: "If we do that, we lessen walks," Cooper said. "If we lessen walks there will be more balls in play, more balls we can catch. There might be some hits involved, but the bottom line is if he can get ahead and get contact early. If they don't have contact early with the pitches he's got, he can be devastating."

"So simple, and so often, so aggravatingly, ignored by pitchers," I observed then.


I write "ignored" from the perspective of the fan who last played a competitive baseball game when he was twelve; I know that Major League pitchers can throw strikes, and that when they fail to they're usually toying with batters by wasting pitches (ie, throwing balls) to upset a batter's timing, expectations, and instincts, to widen the plate. Yet Coop's argument is unassailable; everything comes from first strikes and getting ahead in counts: fewer walks; anxious, defense batters; fielders on their toes; less wear on pitcher's arms; quicker games; etc..


But before tipping, we need strikes. The main thing as far as I'm concerned is not tipping first, it's strikes.

When you see after 30 pitches, it's 15 balls, 15 strikes, we need more strikes than that. You've got to attack, and specifically earlier in the count to get into pitcher's counts. 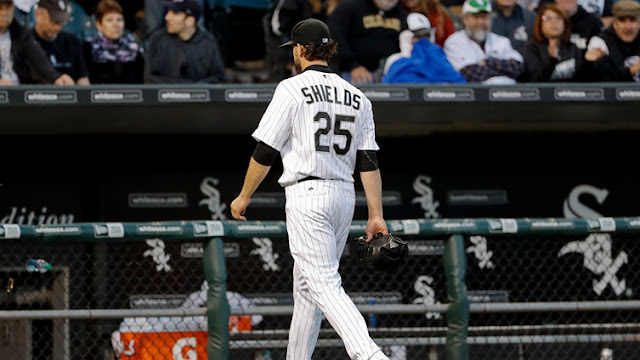 What seems to be worse for Shields is even when he does throw strikes he is wild in the zone, leaving meatballs everywhere and leaving professional hitter salivating and racing up to the bat rack. Carlos Zambrano was a guy who, when everything was right had movement so violent he could get guys out with pitches in the strike zone. When that violence, that movement left him, he was done. If Shields keeps leaving pitches up in the strike zone with little movement or ability to miss bats the WhiteSOX may have made a $27 million mistake

The WSox did make a $27 mil mistake. Yeah, he's just serving up easy ones for sluggers. Good read: when yr fastball and change desert you and you can't locate your curve, you're dead in the water. Wonder what the BoSox will do to him tomorrow night, gulp.