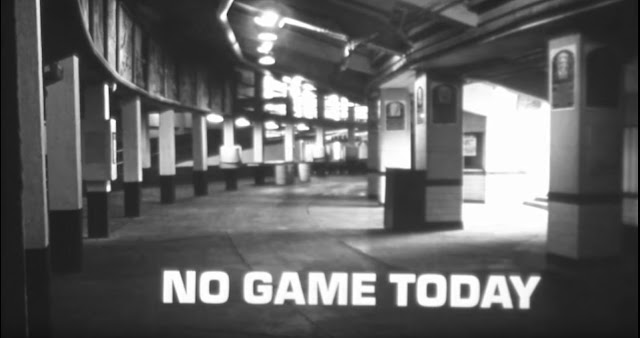 In my recent research on old Comiskey Park in Chicago, I came across this terrific, evocative eleven-minute short directed by Tom McComas in 1966 about a boy who sneaks into and explores Comiskey on an off-day. No Game Today captures the excitement of being an eleven- or twelve-year old and having a Major League ballpark all to yourself. Certain the coast is clear, the boy hops a fence, opens a door into the park, and runs the ramps and aisles down to the field, where he leads off at first, and to the dugout, where he sits and pretends to manage. Grabbing a bat, he peers out to the field as an all-too-common fantasy begins: it's the World Series, Game Seven, the game's tied in the bottom of the ninth, the bases are juiced, and a rookie—our boy—walks up to the plate against none other than Sandy Koufax. The count runs full before the boy rookie lashes a triple to left. Victory on the line, he rounds third and attempts to score, and as the throw comes in, the fantasy is abruptly cut short, and—victoriously? forlornly?—he walks across center field as the film ends.

I recently spoke to McComas about No Game Today. "I grew up a White Sox fan," he told me. "No Game Today was my fantasy." Born in 1938 and currently living in northern Indiana, McComas has for many years operated TM Books and Video, a company that produces entertainment and educational family films for Lionel toy trains, John Deere, Caterpillar, and the Ford Motor Company, among other businesses. In the 1960s, while living on the north side of Chicago, McComas produced documentaries and television spots for advertising agencies, but his eye was on Hollywood. He wanted to make feature movies, and produced No Game Today "with the idea of going out to Hollywood and selling a script that I'd written, not about baseball. But it didn't work out."

Growing up in Wilmette, Illinois, McComas dealt with a fact as hard as the streets: "Everybody was a Cubs fan! We're talking about the late 40s, and early 50s. The Sox were awful. I used to cry in bed when they lost. I spent my youth in tears! I learned how to deal with defeat and disappointment by being a Sox fan."

McComas pitched the project to Ed Short, the White Sox general manager. "They were OK with it. They didn't care one way or the other." On a crisp day in late September, between the second-to-last and the final series of the 1966 season, McComas, his crew, and Peter Sandquist, a young boy whom McComas knew from his neighborhood and who was the son of a state representative, gathered at the park and spent the afternoon filming exterior and interior footage. Particularly memorable are shots inside as an elated Sandquist runs past the long line of photographs of former White Sox players, their faces and bodies a blur of action. "Those photos were inside, right opposite the stairs leading into the park. So we used a hand-held subjective camera to show Peter's point-of-view as he runs past the photographs. That's why the picture is jumping up and down." Also evocative are interestingly-composed shots of Sandquist running past closed concession stands and empty seats, and along steeply angled ramps.

As for the film's conclusion, where the boy's fantasy remains suspended, McComas had very firm feelings. "I had a friend who was a child psychologist, and she watched it. She said, 'You know, kids never dream anything that's a disappointment. They always come out ahead in the end.' And I said, 'Yeah, but that would take all of the tension and mystery out of it.' I felt that it would be boring if he scores the winning run and jumps up and down. For this kid, the dream ended in mid-slide." To this day, McComas is unhappy with the music covering Sandquist as he runs the bases for the first time, and he has yet to find the appropriate substitute. But the final shot, of Sandquist walking across the vast, sunlit outfield, features "Take Me Out To The Ballgame" scored by friends of his who were in a jazz band. Their uniquely arranged version of the classic song, McComas feels, is a key moment in the film.

Also key: verisimilitude. McComas grew up, as so many in Chicago did, listening to the great Bob Elson call White Sox games on the radio, and he hoped to get the broadcaster to narrate the fantasy sequence in his film. "In those days they had debutante balls and coming-out parties," McComas says. "I met Elson's daughter at one of those and asked her if I could get to her dad." The ruse worked. Elson met McComas and his crew at a recording studio on Hubbard Street in Chicago. "I had listened to him for years so it was a big deal for me." Elson arrived in style, rolling up to the studio in a big Buick. "It was tough to find parking there, but I had a spot," McComas remembers. "I stood in the spot for him but he was late—I probably got into ten fights protecting that parking space! But he got in and we went upstairs, where I played the film for him once, and he said, 'Alright, I get it.' The idea was for Elson to ad-lib the action just like he would if it were a real game. So when the bases are loaded, Elson says 'Koufax into the stretch.' I said, 'Cut, cut! Bob, with the bases loaded he'd go into a full windup.' And he said, 'You're right!'

"So I corrected Bob Elson!" McComas laughs at a memory that still delights him a half century later. 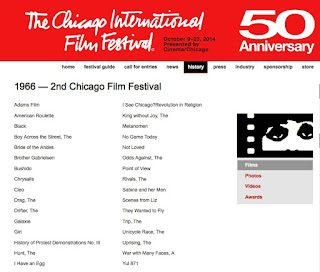 McComas felt some pressure to finish the film, as he was anxious to submit it to the Chicago Film Festival, then in its second year. In post-production, he recognized that the film needed more work, "five or six re-dos or shots that I didn't anticipate." Alas, running the bases wasn't the only physical activity Sandquist had been enjoying that late summer: "He broke his arm skateboarding! I talked to his mother and asked how long the cast would be on, and she said, 'Well I think the cast will come off on October 10.' So there was about two weeks between the cast coming off and the screening at the Chicago Film Festival." In mid-October, McComas and his crew hustled back to Comiskey for re-shoots. At the doctor's office, McComas had told Sandquist to make sure he wore the same t-shirt, but some continuity suffered: "In the background there's a wagon with wheels on it, way out in center field. The season was over and they had equipment all over the place, working on the field, preparing it for winter, I guess. When he's running toward second that was before the broken arm, and sliding into second and leading off was after the broken arm, and there are three or four shots where you can see him holding his arm kind of awkwardly, like it's still in a cast. And I'm saying, 'C'mon slide, Peter! Your arm's fine!'" McComas and his crew "edited night and day to get it ready for the festival. It was shown, but it was too late for the judging. We submitted it the day before the screening. It turns out they judge these things before they show them to the public."

The image of a tow-headed, striped-shirted boy jumping a fence and running the bases is strangely eternal, yet also, in its innocence, very much of the era. I asked McComas if he feels that he could make his film today. "They'd probably want money," he sighs. "Everybody wants money." Of no small surprise to McComas is the the general indifference with which his film was greeted by the White Sox organization. "No one ever picked up on the film. Years ago, I sent it to the White Sox marketing guy thinking that, once they'd moved to U.S. Cellular Field, there'd be nostalgia, a yearning for old Sox fans to see the old Comiskey again. The first 20,000 would get a free DVD of the film, or they could show it on the screen during a rain delay. But I never heard back from them. I don't know that it got to the right guy. They can still do it."

"It was fun for me to get into the park and to do all that stuff," McComas says. "They say you should do what you know. And I definitely knew that."

Here are some screen grabs, followed by the film: 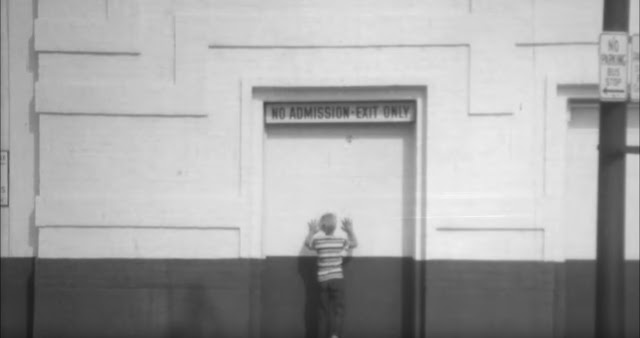 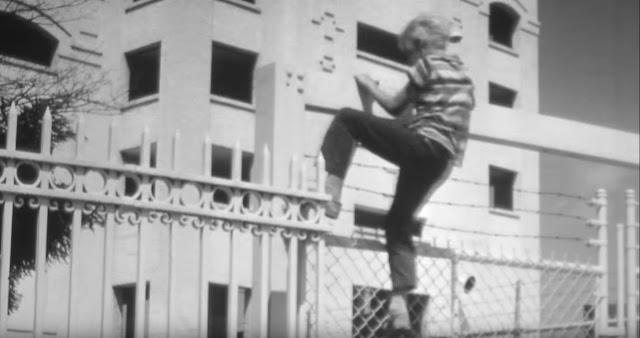 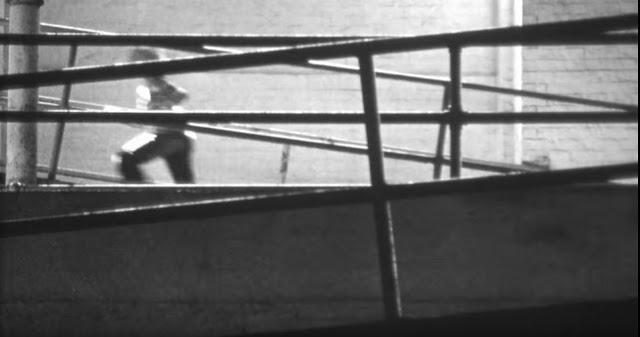 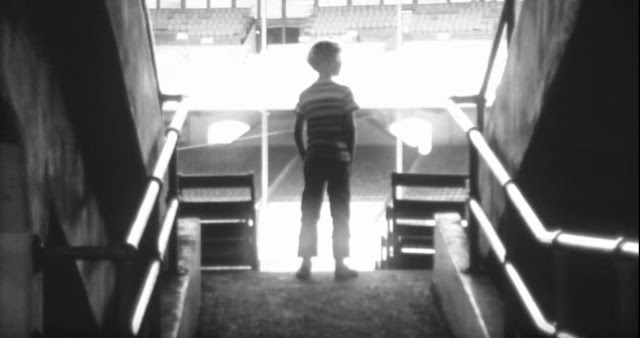 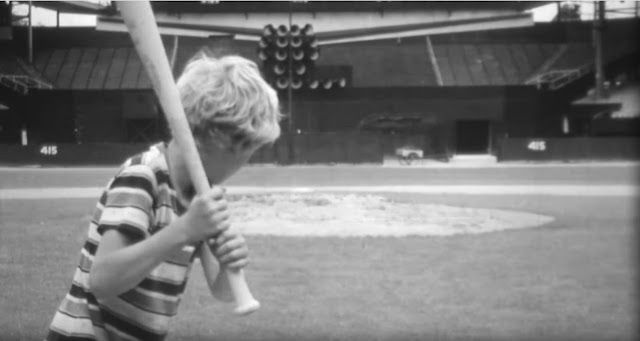 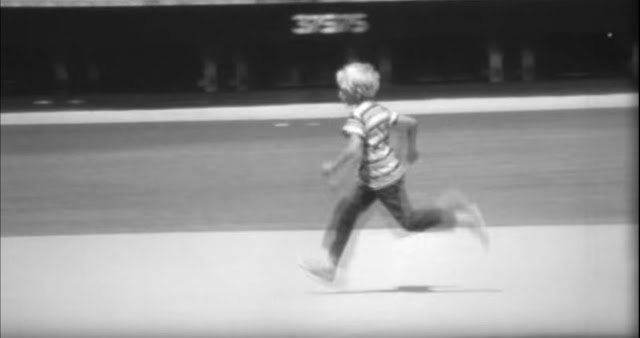 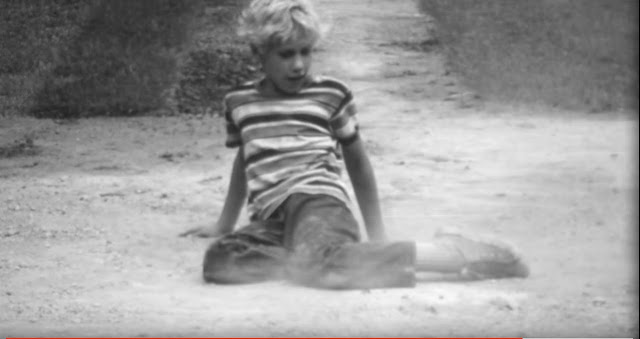 I've written here, here, here and here about old Comiskey Park in Chicago and of my regrets at never having caught a White Sox game there. To that threnody I'll add my misgivings that I never had a beer at McCuddy's, a bar that stood at 247 West 35th Street for nearly eight decades until it was demolished in 1988 during the construction of what is now U.S. Cellular Field. Despite vague promises from the city, the tavern was never rebuilt near the new park.

The demolition made national news. Tipped by a piece at Chicago Bar Project, I dug up an October 12, 1988 New York Times article about the joint's closing:

McCuddy's has been a Chicago institution since John J. McCuddy got a tip from a rich friend and sportsman, Charles Comiskey, who owned Chicago's American League franchise at the turn of the century and long harbored dreams of moving from the old ball park at 39th Street.

John J. McCuddy was one of the few people Mr. Comiskey let in on the dream, and McCuddy's opened its doors in time to serve the construction workers who built Comiskey Park—dubbed the ''baseball palace of the world'' when it opened on July 1, 1910.


As the 12-year-old great-great-grandson of the tavern's founder tearfully pulled the lever, a tractor-like high lift from Speedway Wrecking Co. took the first big chunk out of the small saloon across the street from Comiskey Park.

Young Jack Blachley, who used to sell hot dogs in the tavern, was too choked up to talk about it at first and hid his face as he said of the demolition, "It's stupid."

My favorite quote comes from Pat Senese, the bar's owner, in the New York Times article: ''We've been open for every home game ever since. In fact, that's the only time we are open. They have rock concerts here, soccer games, whatever—our doors are shut. This is a baseball joint—always has been, always will be."

Cheers, McCuddy's. Would I have loved to duck in for cold beer or three before a game.

The Magic Balancing Bat, and other Sights and Sounds at U.S. Cellular Field