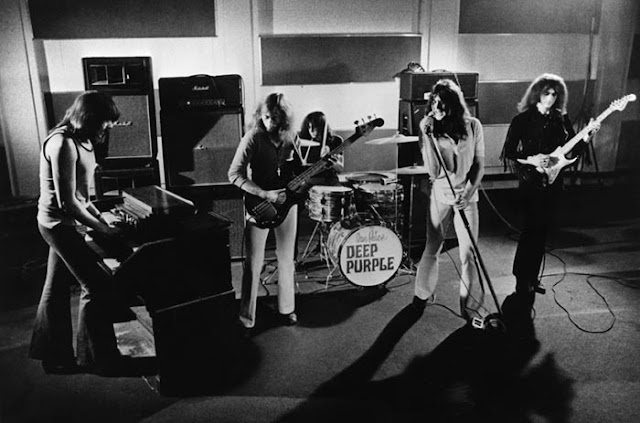 Deep Purple recorded "Highway Star" in December of 1971 in Montreux, Switzerland, on "the Rolling truck Stones thing just outside." Improvised on a tour bus on an acoustic guitar by Ritchie Blackmore and Ian Gillan, the song became a concert staple, and famous as the opening track on Machine Head, released in 1972.

The song's first two minutes contain everything great about rock and roll: a three-chord, mock-heroic, revved-up opening and then a head-banging rush of eigth notes; crunchy power chords; and singalong yelping about a cool car and the girl inside it. At the two minute mark, something—virtuosity, perhaps, a desire for something grand and epic—enters the song, and the calendar changes. The last 2/3 of the song is given over to intricate, carefully played organ and guitar solos, and what began as a simple but urgent rock and roll song about a highway star ends up a fussy. Organist Jon Lord acknowledges that the organ and guitar solos originated from chord sequences influenced by Johann Sebastian Bach. To my ears, the decade begins when a snotty, AM-radio garage song about a fast car and a faster girl morphs into FM-radio ornateness with elongated guitar solos from the Baroque era.

For better or for worse. What the hell, it's still a killer driving song.

Photo via Metalship.
Posted by Joe Bonomo at 6:19 PM

It's a fantastic song. As is Space Truckin'.