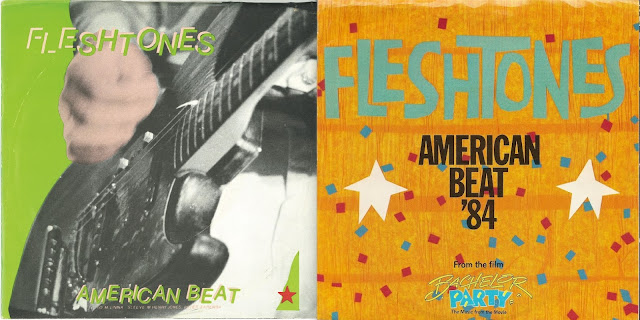 In advance of the Fleshtones' 40th anniversary this year, I'll be combing through the Sweat: The Story of The Fleshtones, America's Garage Band archives. (Recent posts here.) In 2007 Larsen Records (France) and Dirty Water Records (UK) released Vindicated! A Tribute to The Fleshtones, a compilation featuring twenty-three international bands covering songs spanning the Fleshtones' career. (Disclosure: I wrote the liner notes for the vinyl edition.) Of the many terrific tracks here—which span four-on-the-floor House to retro garage to swampy acoustic to surf instrumental in their approaches—the standout might be the last, a monumental pairing of Sweden's great and long-running Nomads with New York City front-man and bar-owner extraordinaire Handsome Dick Manitoba on a ripping version of "American Beat," the Fleshtones' 1979 debut single. (The Fleshtones re-recorded it in 1984 for the soundtrack of the Tom Hanks vehicle Bachelor Party).

If you haven't heard the Nomads/Manitoba track, it's killer. The Nomads provide a characteristically heavy backing track on top of which Manitoba commandeers Peter Zaremba's lyrics extolling the virtues of American rock and roll—and adds his own roll-call riff of legends at the song's close. An international alliance in tribute to Super Rock: