In advance of the Fleshtones' 40th anniversary this year, I'll be combing through the Sweat: The Story of The Fleshtones, America's Garage Band archives for some little-seen nuggets. I was stoked to find online this ticket stub to one of the more celebrated Fleshtones shows, a Paris gig that those who were in attendance still talk about. 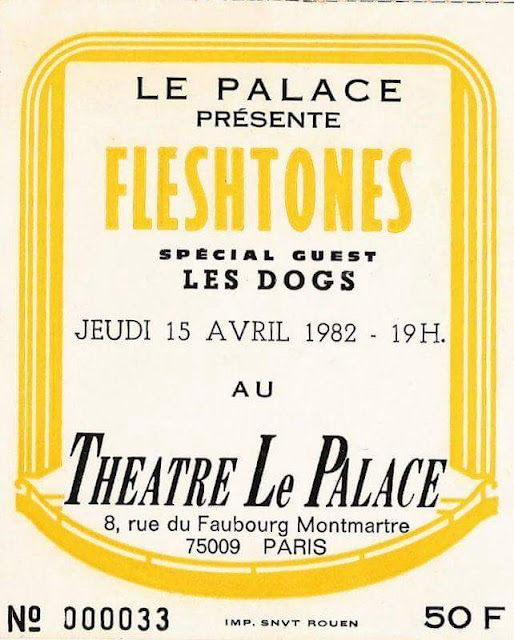 By April of 1982, a few months after the release of Roman Gods, the band had endured diminishing returns on the radio and a miserable slog through Britain, playing shows in front of hostile crowds, when they arrived in Paris for the tour's final gig.

Here are some excerpts from Sweat:


Even the warm and welcoming weather couldn’t prepare the band for the show that evening at Le Palace. The buzz from the “Radio Party” show had only increased in Paris in the year and a half since its broadcast, Roman Gods was selling well, and Parisian fans and certain critics were very interested in seeing this wild New York City band.... The Palace show was promoted well and filmed for the weekly television show Les Enfants du Rock (the performance still shows up occasionally on French and Canadian television). Popular French band The Dogs opened the show to a rocking and primed audience, and just before nine The Fleshtones hit the stage—utterly shocked to find the venue sold-out with over a thousand fans stomping and yelling for them. “We had just come from England where we had five people who’d rather piss on us than care if we were in front of their club, or dead in it,” Keith says. “We walked in on something at Le Palace that we weren’t expecting.”

Duly launched by ringmaster Zaremba, Gordon was the first band member to hit the stage in the group’s stylish entrance. At the time Gordon was opening each show with the theme from an old TV show called The Defenders. “It was a very pretty, moving piece,” Gordon remembers. “I make it to the stage, play the opening theme, and within five seconds I know that this was not any normal crowd. By the third song we had them in the palm of our hands. By the fifth song, we weren’t scared, but we realized that if we were to pursue it any further we could've caused a riot. We almost did.” Keith remembers the chaos and thrill of the show’s opening. “When we started the show we went through the audience, which kind of amazed them because this wasn’t a small club, this was a sold-out theater. Entering through the crowd was something that struck us that night because of the situation. The audience, of course, never saw that before. I’ll never forget that I got up close to the stage and the bouncers didn’t know that we were the band! I’m trying to tell them in English, ‘I’m in the band, I’m supposed to play!’”

After several delirious encores the band was finished, or so they thought. Gordon remembers the near-Messianic mood at the show’s culmination: “When we left the stage, I stood upstage and saw Peter Zaremba—God’s truth—being carried aloft, his feet never touching the ground from the stage to about three hundred feet back.” Seized by the building’ exalted vibe, the sweaty stamping and cheering, and the mood generated by the hour-long rock & roll party, The Fleshtones inaugurated a soon-to-be trademark gesture: they leapt from the stage as one, and, singing and chanting down the long corridor that led to the front entrance, took their orgy out through the doors and into the streets. The five sweating guys from Queens had become pied pipers in paisley shirts.

“Hundreds of people followed us out onto the street, while we’re still playing,” Keith remembers. “We’re just picking up whatever we could find, singing whatever R&B tunes we knew a capella, and the audience is joining in, they’re all around us.” The police were summoned and stopped traffic in front of the club. Bill: “The traffic couldn’t do anything. The police came, mostly just observing and trying to get a handle on what it was, holding back traffic, making sure nobody got killed!” Peter recalls, “There were a bunch of gendarmes lining the street with submachine guns, holding the crowd back. As we approached them, we said, ‘Peace, baby,’ and marched through them and took over the whole intersection.” The bacchanalian drift out into the streets was wholly spontaneous, as Marek remembers. “I don’t think we were going out of the building a lot; later that became a signature thing to do, to get down in the audience. I don’t know where it first started, that may have been it. I think Peter was definitely thinking, This is some crowning moment, and how can we pay homage to that, what can we bring to it? This is such an amazing thing that The Fleshtones have come to France and the fans were rabid!”

The crowd eventually followed The Fleshtones back inside the venue, and after the show dissolved, the band was treated by C.B.S. to a late dinner at Chez Gus on the rue Montmartre, escorted to the restaurant personally by the Hells Angels of France. The guys were buzzing, the toast of Paris. “You must see it to believe it,” an epileptic reviewer wrote the next month in Rock ‘n’ Folk, a Paris fanzine. “I’m talking about The Fleshtones on stage. A rock ‘n’ roll cyclone...an American raid.... I can declare this, in a bombastic excess of advertising generosity: The Fleshtones live cannot be related!... It’s not a stage anymore, it’s a nuclear power station.... They came, we saw, they conquered."

Here are two clips from Les Enfants du Rock—"Shadow Line," "All Around The World," "Cold, Cold Shoes," and "Ride Your Pony"—that indicate just how raucous and fun the show was. If only someone had thought to drag the video cameras outsides on the street afterward. 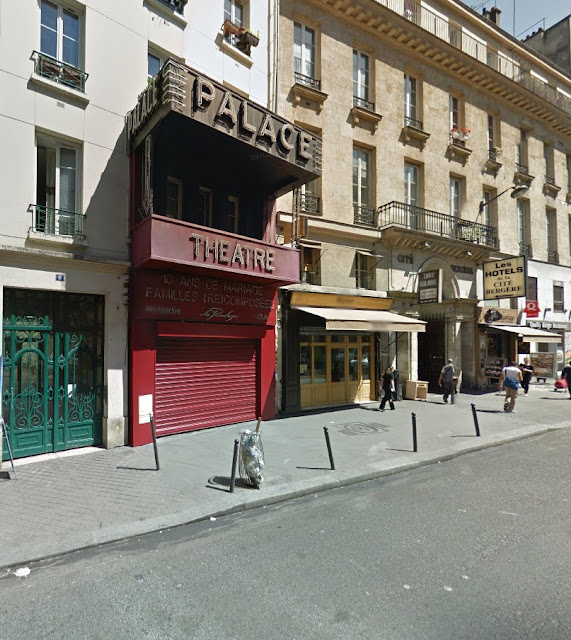 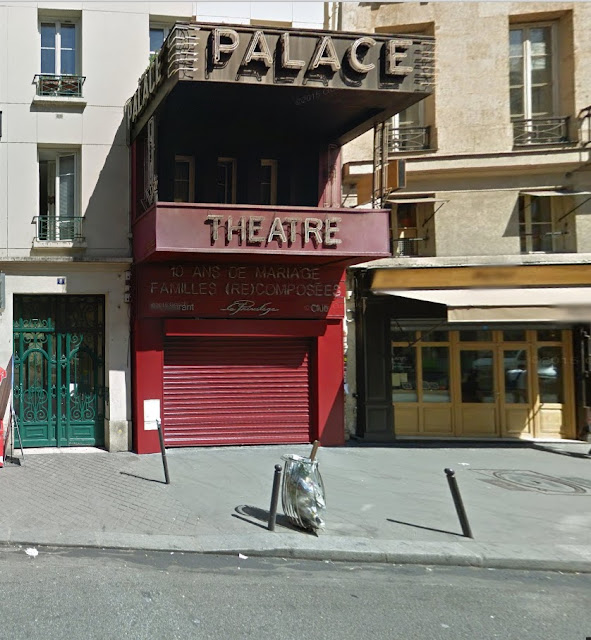 Thanks, Joe, for all the stories.