In advance of the Fleshtones' 40th anniversary this year, I'll be combing through the Sweat: The Story of The Fleshtones, America's Garage Band archives for some little-seen nuggets. In the late 1990s the hardest working men in show business took a breather, peered into their collective wallet, and changed course, opting to target specific regions of the country and organize four- and five-day weekend shows rather than inexhaustibly barnstorm the country. Apart from when in Europe, where the band plays for weeks at a time, this is the Fleshtones' touring modus operandi into the 21st century.

Roughly a quarter century ago, things were much different, as this helpful map outlining the band's Spring 1993 U.S. tour indicates. (The map was created by Anne Tek, then married to Keith Streng.) Supported by their label, Ichiban, the Fleshtones drove nearly 10,000 miles testifying to Super Rock, 22 shows in 32 days. Such was the punishing schedule the Fleshtones tore through for many years.

The damage, beyond ringing ears and bruised livers:


Two shows cancelled by promoters (in Vancouver, Canada and Montgomery, Alabama).
Six of ten days off for diving-only.
One van breakdown.
No accidents. 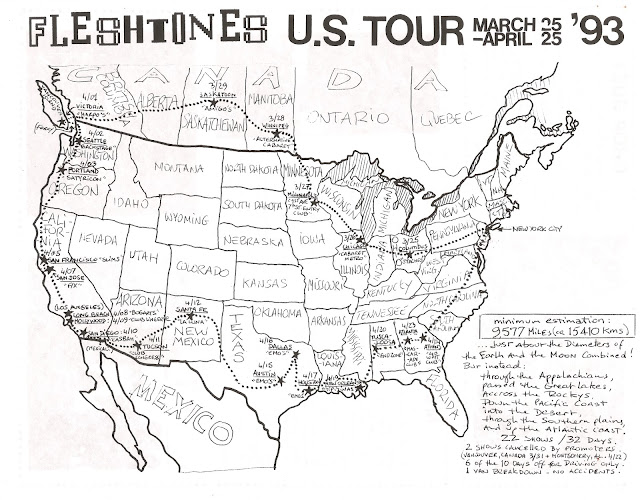