In her terrific essay "On Not Liking Sex," writer Nancy Mairs revisits an old essay she thought she'd finished, titled "On Not Liking Sex," and discovers that her earlier attitudes were sorely lacking. Near the end of the new piece she brings a skeptic's eye to narrative resolution, admitting that she craves it, but also recognizing its essential artificial demand: no more development. A hard thing to reign in, development, least of all of the personal sort. Life's just too messy:


I love closure. Especially in any kind of writing. l like to lie off the tale with some statement that sounds as though nothing further can he said. Never mind the Princess's hysterical weeping on the morning after her wedding night, her later infidelities, the first son's cleft palate, the Prince's untimely death during an ill-advised raid on a neighboring kingdom, the old King's driveling madness: They lived happily ever after, or, if the tale is a modern one like mine, unhappily ever after. But their development ceased.

When does an essay end? she's also asking, and Why there? The sneaking, and sinking, suspicion I have when I read Mairs's essay is that there really are no endings to essays, only pauses—for deadline, dejection, frustration, faux triumph, boredom. Life demands that we turn elsewhere, finally, and that's a good thing. But eventually we depress the pause button and resume, usually fooling ourselves into believing that that last period had been the ending of something, when it might've been the beginning. As I've said elsewhere, writing an essay can feel like building a house without advance blueprints: rooms keep popping up; doors multiply; acreage expands; basements deepen; attics soar. If we don't stop at some point, the whole structure will come crashing down of its own indulgent weight. That's a good enough place to stop as any, I guess. 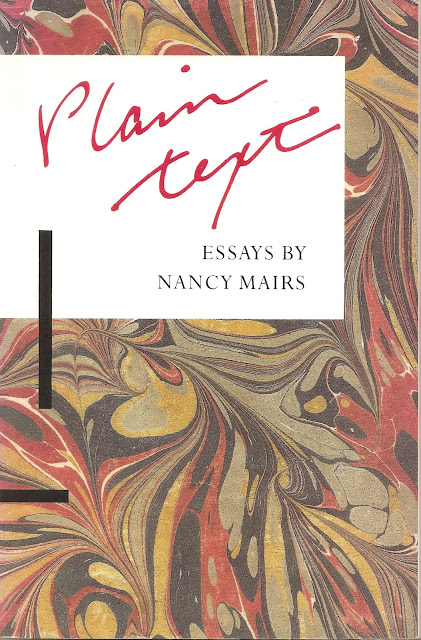