I Wanna Hear It on the Radio 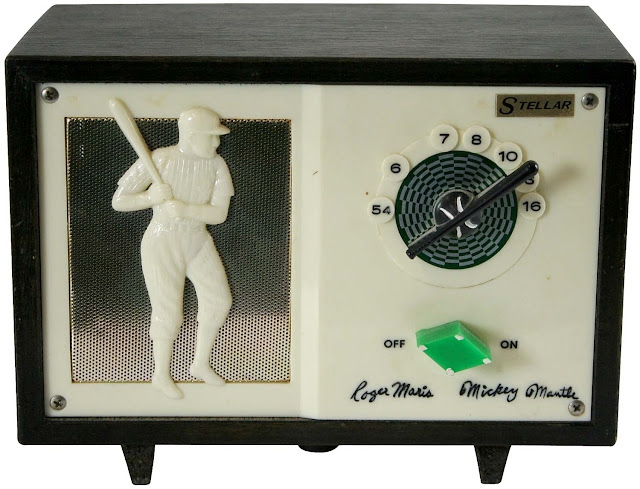 My earliest memory of baseball on the radio is walking past my mom, barely glimpsed behind behind a mountain of white dress shirts, as she ran an iron in the laundry room. A week's worth of my dad's IBM-uniform shirts needed pressing, and through the periodic hissing of steam I'd hear the voice of Chuck Thompson, the longtime broadcaster of Baltimore Orioles games. (Ironing knowing no seasonal respite, I also have memories of her listening to Washington Bullets basketball games as she toiled away.) That stack of shirts steadily diminished as the game's late innings approached.

I've written before about another baseball radio memory from my adolescence:


In the summer of 1978 my dad, mom, and five siblings scrunched into our Ford Gran Torino station wagon and drove from suburban Washington D.C. to the small town of Coldwater in rural, far western Ohio, a trip we made annually to visit my mom's parents and her hometown. I loved cruising the Pennsylvania and Ohio turnpikes for nine or so hours, leaving suburbia behind, armed with a cache of Richie Rich and Archie comics and candy (and car sickness pills). I have an indelible memory from this particular trip: staring idly out the window as night came on, the radio tuned to the Cincinnati Reds game as Pete Rose tried to keep a hitting streak alive. My mom's dad was born and raised in western Ohio (he was mayor of Coldwater for a time) and was a staunch Reds fan. We'd often arrive after dark, and I remember seeing through the living room window my grandfather's silhouette as he stood up from his chair where he'd been sitting listening to the Reds game. I associate these mid-summer trips and damp, muggy Ohio with baseball, specifically Big Red Machine baseball: Rose's hustle, Johnny Bench's restaurant in Cincinnati with the giant hand-shaped bar chairs, George Foster's herculean homer

That summer, Rose's 44-game hitting streak—it began on June 14 in Cincinnati and ended on August 1 against Gene Garber and the Atlanta Braves—was epic to me, a striving for something that seemed impossible, mythically so. I didn't have a home team; my family pulled for the Baltimore Orioles by default, the Washington Senators having decamped for Texas in 1972, and so I mostly watched American League baseball, tuning in to snowy Channel 11 to catch the O's. When I wanted to watch National League ball—when I wanted to see Rose or Foster or Mike Schmidt or Steve Garvey or J.R. Richard—I had to wait for NBC's Saturday Game of the Week, the All-Star Game, or the playoffs. This scarcity made Rose's hitting streak for me all the more distant, other-worldly: I'd follow it in the Washington Post Sports section, mostly, maybe catch a highlight on local news at 10 or 11. And so as my family drove closer to south-western Ohio and my dad was able to tune in the game, Rose's streak became clearer to me, and not only in reception. This is happening now, I remember thinking. The top of my head came off as I gazed out the window at the dusk dark, the shapes of barns and grain silos against enormous corn fields silhouetted against an even bigger dark sky, as Rose took a fastball low, chopped a breaking pitch foul, the smell of gasoline and manure and the rhythmic hum of the two-lane roads in rural Ohio hypnotic, as I wondered where exactly Riverfront Stadium is as Rose looked at a ball low, and then drove the next pitch into center field. I pictured Rose holding his helmet tightly onto his bushy head as he rounded first. This was 1978: there was no Internet, satellite radio, or ESPN. The drama in my head was all I had, and it was everything. Roger Angell calls this "the interior game." I watched a baseball game last night, but my vision of Rose hitting in 1978 is just as vivid. Childhood: Pete Rose, baseball, a streak, farms, and the black Ohio night sky.

And about luckily tuning in to the car's satellite radio for the final inning of Mark Buehrle’s perfect game in 2009, when my wife and I were idle on that same Pennsylvania turnpike of my childhood:


Thirty years later, again on the Pennsylvania Turnpike, this time heading east, and Ame said, “Let’s try and tune in a game.” A button or two later and the White Sox, my team, come on, editorialized by a high-pitched ESPN announcer calling the three outs left for Mark Buehrle’s perfect game. As I'd imagined Rose’s swings, I imagined DeWayne Wise’s scaling of the center field wall to preserve Buehrle's perfect game. We were stuck in endless traffic, construction, single-lane purgatory. We yelled after the last out and I pounded the roof of the car. Who knew what the passing cars thought.

In recent years I've been listening to baseball games via MLB GameDay, which last year afforded me an old-school-style radio experience. Minutes before I was scheduled to teach my night class, I was glued to my office computer listening to the fifth game of the Toronto Blues Jays/Texas Rangers American League Division Series. With two out in the seventh inning, the Rangers' Rougned Odor scored the tying run from third after catcher Russell Martin's casual throw to reliever Aaron Sanchez deflected off the bat of elbow-pad-adjusting Shin-Soo Choo. Midway through the subsequent lengthy delay, as umpires, both teams, and thousands of fans debated, I had to head to class. About that game, Sports Illustrated's Jay Jaffe wrote, "Operas have been written about less." I crossed campus with my iPhone pressed to my ear, taking in the theatrical drama, a 21st Century stand-in for kid a half century earlier listening through the crackle of his transistor radio.

A few years ago I enjoyed a radio moment of the terrestrial sort, sitting in my car on Milwaukee Avenue in Chicago waiting for Amy. I tuned to AM670 for the last inning of the White Sox game. It was early April, still chilly, and the Sox and the Seattle Mariners were knotted at three in the bottom of the 10th inning. Paul Konerko had lined out for the first out. The next batter, right fielder Dayan Viciedo, took a 2-0 pitch from Kameron Loe deep to left field to win the the game. Walk-offs are always thrilling, even in early season middling games, and this conclusion came in a flash, before I'd really acclimated myself to the situation, to the ebbs and flows of the game. It was out, it was over. Hearing Ed Farmer's excitable call brought me back to countless trivial and enormous baseball moments that I've enjoyed through antenna hiss or digital 1s and 0s. Clapping my hands in the car, grinning like an idiot, I was, in that instant, every age of fan I've ever been.

One undeniable drawback to listening to this game on the radio: I missed the team's 1980s throwback jerseys.