Everything Approaching and then Disappearing: Virgina Woolf and the "great hall" of childhood

In April of 1939, seeking a break from the task of writing a biography of Roger Fry, Virginia Woolf embarked on a memoiristic essay titled "A Sketch of the Past." She worked on the piece for a year and a half, the last entry coming in November of 1940, some four months before her death. In the evocative essay, reprinted in Moments of Being, Woolf writes beautifully and memorably about love and grief, the difficulties of capturing the past in language, and of the differences between remembering and composing. In the process, she offers one of the descriptions of childhood:


Many bright colours; many distinct sounds; some human beings, caricatures; comic; several violent moments of being, always including a circle of the scene which they cut out: and all surrounded by a vast space—that is a rough visual description of childhood. This is how I shape it; and how I see myself as a child, roaming about, in that space of time which lasted from 1882 to 1895. A great hall I could liken it to; with windows letting in strange lights; and murmurs and spaces of deep silence. But somehow into that picture must be brought, too, the sense of movement and change. Nothing remained stable long. One must get the feeling of everything approaching and then disappearing, getting large, getting small, passing at different rates of speed past the little creature; one must get the feeling that made her press on, the little creature driven on as she was by growth of her legs and arms, driven without her being able to stop it, or to change it, driven as a plant is driven up out of the earth, up until the stalk grows, the leaf grows, buds swell. That is what is indescribable, that is what makes all images too static, for no sooner has one said this was so, than it was past and altered. How immense must be the force of life which turns a baby, who can just distinguish a great blot of blue and purple on a black background, into the child who thirteen years later can feel all that I felt on May 5th 1895—now almost exactly to a day, forty-four years ago—when my mother died.

This shows that among the innumerable things left out in my sketch I have left out the most important—those instincts, affections, passions, attachments—there is no single word for them, for they changed month by month—which bound me, I suppose, from the ﬁrst moment of consciousness to other people. If it were true, as I said above, that the things that ceased in childhood, are easy to describe because they are complete, then it should be easy to say what I felt for my mother, who died when I was thirteen. Thus I should be able to see her completely undisturbed by later impressions, as I saw Mr Gibbs and G. B. Clarke. But the theory, though true of them, breaks down completely with her. It breaks down in a curious way, which I will explain, for perhaps it may help to explain why I ﬁnd it now so curiously difficult to describe both my feeling for her, and her herself. 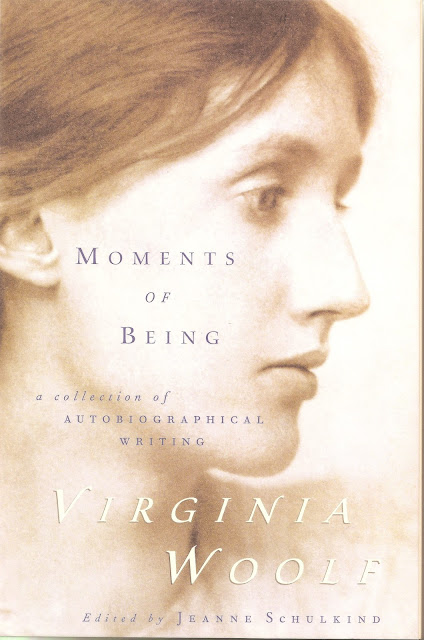 Email ThisBlogThis!Share to TwitterShare to FacebookShare to Pinterest
Labels: a sketch of the past, adolescence, Autobiography, childhood, essay, essays, family, grief, Memoir, moments of being, the past, virginia woolf, writing