Apparently the winds of change hadn't yet reached Derby, Connecticut, where the editorial offices of Country Song Roundup magazine stood. "In Like A Lamb—Out Like A Lion," an enthusiastic, fan-friendly article on Jerry Lee Lewis, ran in the September 1958 issue, months after Lewis's so-called "marriage scandal" had erupted. Near the end of the piece, Mae Boren Axton makes a great observation about Lewis that he'd trade on a decade later, licking his considerable wounds:


But when he changes his mood from his rocking, rolling piano playing and singing to such tender melodies as “You Win Again”, there is a hush that grips the audience which is a greater tribute to this versatile artist than his rockabilly tunes bring forth. They realize that he can furnish an outlet for their nervous energy then turn right around and, with a wistful sadness in his eyes, sing their stories of life and its problems in a soothing way.

Ah, life and its problems. ("Out like a lion," indeed.) For now, at least, he was still in the hands of well-meaning writers and editors. 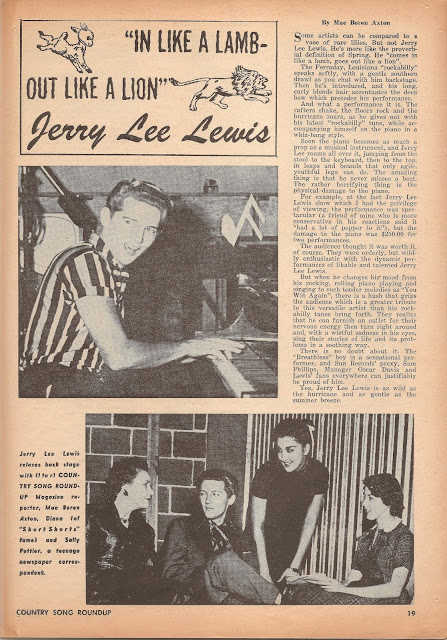 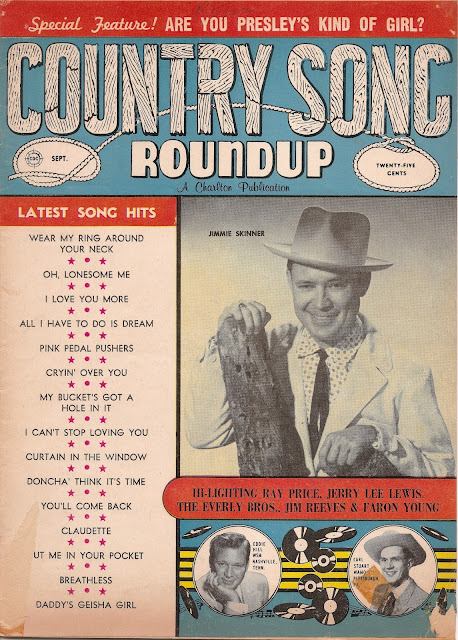 I never got how Jerry Lee was derided in the UK for his "child bride" yet the Brits were his staunchest supporters in the years to come. I never really got a break-down of what age demographic the deriders were: adults or the kids who bought his records?

Also don't know if you've checked out cover boy Jimmie Skinner. He is a completely overlooked artist, had an electric mandolin (Ray Lunsford) in his band and his own record store in Cincy famous for mail order.