No Need to Explain: Nicole Panter on Punk Rock 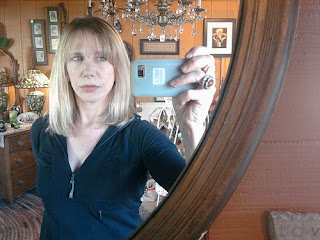 Southern California-based writer Nicole Panter (left) has worn many hats: she managed the Germs in the late-1970s and co-created and wrote for Pee Wee's Play House; over the past several decades she's worked as a script editor, film critic, essayist, photographer, and teacher of screenwriting at the California Institute of the Arts. She hasn't moved in punk rock circles since the early 1980s, but in 1993 penned "fuck you punk rock/1977," an exhilarating, autobiographical micro-essay on the lure of punk rock, its community and its self-explanatory reason for being. In 266 words, Panter describes her vital connection with rock and roll, and, because the piece is in touch with what A.R. Ammons calls a "non-verbal source," she also moves back and forth in time, writing about, and for, anyone at any time who's felt marginalized, alone, ugly, and who's craved an outlet—electric or otherwise. I discovered this gem in Evelyn McDonnell's and Ann Powers's anthology Rock She Wrote; the piece originally appeared in the Fiz 'zine in 1993 and was collected in Panter's own Mr. Right On and Other Stories in 1994.


Imagine the exhilaration of knowing that you are part of something that is completely and utterly new and different. Imagine that all your life you have felt cut off from the rest of humanity at the most elementary level—you do not communicate well with others. Imagine feeling so lonely and twisted that at times you have really, really tried to kill yourself, even though you were just a kid. Imagine that the people who were supposed to love you, your family, have Continually and deliberately brutalized and betrayed you in ways other people couldn’t begin to imagine. Imagine that you are at the end of your rope. Then walk into a room where for the ﬁrst time in your miserable, horrifying life, you feel a part of things. These people understand you because these things have also happened to them. There’s no need to explain your silence, your shyness, your need to get totally obliterated every night of the week and to maybe fuck some really cute boy against a wall in a dark corner of the club without ever asking his name and then go dive into the sea of bodies pogoing. There’s no need to explain the way this music, this noise, makes you feel. There’s no need to explain why, when you get dressed every day, you do everything you can to make yourself look as ugly on the outside as you feel on the inside. There’s no need to explain your hurt or your anger or the damage you feel because it is perfectly self-explanatory in this place, in this music.

Image of Nicole Panter via flickr.
Posted by Joe Bonomo at 10:45 AM

Just came across this, thanks for the lovely piece!