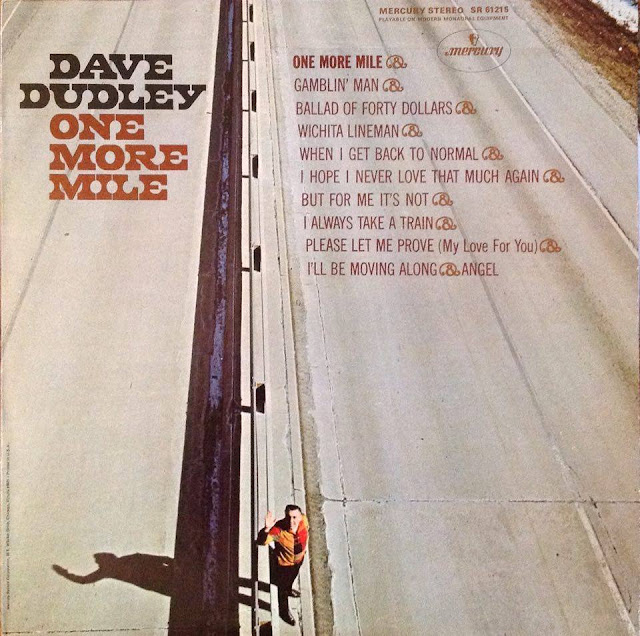 There's something comforting about a Dave Dudley album, which might be odd considering that every song on it is about departure and freedom tinged with regret as sung by a lone wolf. But then the old, bright-red Mercury label brings me back home. Dudley's 1969 album One More Mile, produced by the legendary Jerry Kennedy, is hardly unique to the singer's cannon: DD sings about the road and its lure. The title track is another winner from the venerable hand of Tom T. Hall, and was another hit for Dudley, peaking at #12 on the Billboard Country Chart in June. Dudley kept dogging it, one song at a time:


But the deep cut I like on the album is unique in that Dudley himself wrote it. Usually an interpreter of others' songs tailored to his style and subjects, on the folky, Johnny Cash-esque "But For Me It's Not" Dudley takes the wheel and, though the chorus is a bit awkwardly phrased, the song feels genuine and lived-in. Ironically, Dudley was injured in a car accident in 1960; that incident didn't seem to dampen his love of the road (and the Billboard-charting singles didn't hurt, either, of course). The statement-of-purpose lyrics of "But For Me It's Not" are terrific, as evocative of wind whistling through an open window as the song's fine, finger-picked acoustic guitar (probably played by Kennedy) and pistoning brushed snare (courtesy of the great Buddy Harman) are evocative of lightness and movement. Here are some striking lines:


Well I see a lotta pretty girls everywhere that I go
And sometimes I wish I had one for my own
But I never found one who share everything I ain't got
...
I can't understand why everybody wants a home and there they stay
Ain't they never heard a robin near a highway at the break of another day?
...
Well when I die I wanna die a standin' up
Near a highway sign that's pointin' out the rock
Where I can watch all the folks in my backyard livin' it up
Now for some that might be lonely but for me uh uh no it's not


"When I get back to normal, everything is gonna be alright," Dudley sings on another good one on One More Mile—it's a tune about a guy who's been drunk every day since his woman left. But once he's back to normal.... Poor Dave: he's always on the road between here and there.

Email ThisBlogThis!Share to TwitterShare to FacebookShare to Pinterest
Labels: 1969, but for me it's not, country, country music, dave duddley, driving, driving songs, one more mile, song, songs, tom t hall