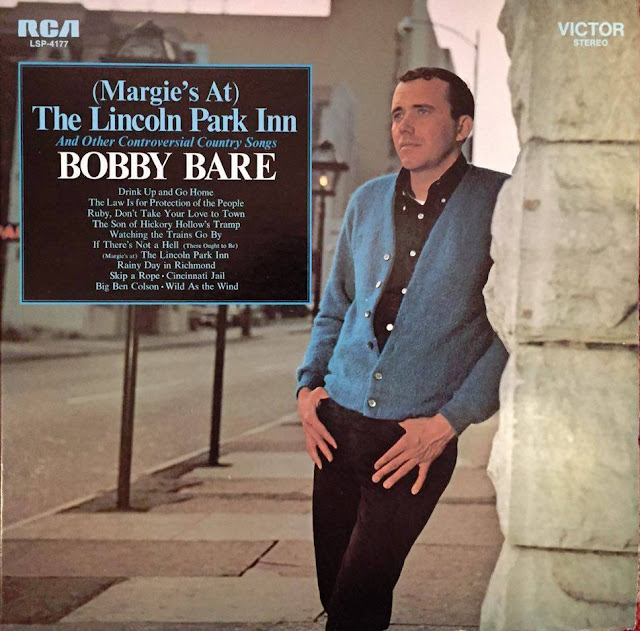 As underrated singers go, Bobby Bare is golden. For much of his career in country music he flew under the radar relative to his starry peers and didn't enjoy much crossover success on pop, but he cut consistently terrific material in the 1960s and 1970s, and made regular appearances on the Billboard Country charts, including several Top Ten hits ("Detroit City," "500 Miles From Home," "Four Strong Winds," "Streets Of Baltimore," among them). Like many talented (and less so) country singers of the era, Bare benefited from Nashville's Music Row, enjoying top-shelf songwriting even as his record sales slipped in the 1980s. His deep, affecting voice, crooning style, and choice of material are rich and cosmopolitan, possibly too hard to box-in for country music radio programmers and promoters to get behind him and maintain his star power over decades.

My introduction to Bare was watching his son, the kaleidoscopically talented Bobby Bare Jr., play a great show several years ago at the Iota Club in Arlington, Virginia opening for The Bottle Rockets; afterward, I started tracking down his pop's records. In addition to possessing one of my all-time favorite album titles, (Margie's At) The Lincoln Park Inn And Other Controversial Country Songs, released in 1969, contains several standout cuts capturing Bare's wry, adult phrasing and forlorn world view (though none, from our Twenty-first century perspective, are particularly "controversial"). The sad, waltzing title track, written by Tom T. Hall, was a number four hit for Bare and is quintessentially Hall in its downbeat, tried-and-true subject made fresh and memorable by narrative details. Hall frames the song with the image of an upstanding, Scout-leading father fixing his son's bike—in between, we learn the real story, that the man's been cheating on his wife at the Lincoln Park Inn with Margie. The song's about borders: between husband and wife, churchgoer and priest, wife and mistress, father and son, adult and child, teacher and student, home and hotel, decorum and desire. Old, old territories, but in Hall's and Bare's hands the tale feels like a fresh wound. The musicianship, by Nashville's ace studio players, is superb, characterful and restrained, and the orchestral strings avoid smothering the sentiment with melodrama. The singer idly wonders at the damage he'd cause by speaking the truth about infidelity to a group of young kids, and the song's final moments—poised as the fatal instant between doing right and doing wrong, yet again, as the singer's low on cigarettes and knows that's the perfect excuse to head to the Inn—suggests the endlessness of moral failings.

Speaking of which.... The last song on the album, the beautiful, devastating "Rainy Day In Richmond," written by Jerry McBee, Dan Lomax, and Billy Large, makes a move familiar in country music, wherein the cheater becomes the cheated, the distance between the two griefs etched in stone. Behind a deceptively light Latin beat, the singer's followed his girl and her lover during their "hour of fun" to the "love nest they had found." He stands in disbelief and finally must turn away from the painful truth, underscored by the gloom of the day's weather. There's no indication in the lyrics that the singer himself has sinned—but the gap between the first and last song on an album side is small, finally, when those songs are sung by the same person. Bare looks in two directions, one facing sin, the other facing heartache, and he's grown-up enough to recognize, if not voice, the irony of his resentment blending with his guilt. What I love about a great country song is the way it evokes a timeless place with daily ingredients: his girl's and her lover's "hour of fun" take place on the tawdry, squeaking beds in Richmond's version of the Lincoln Park Inn. There's one in every town. Always has been. Always will be.