Bedford Avenue and the Caroming Homer 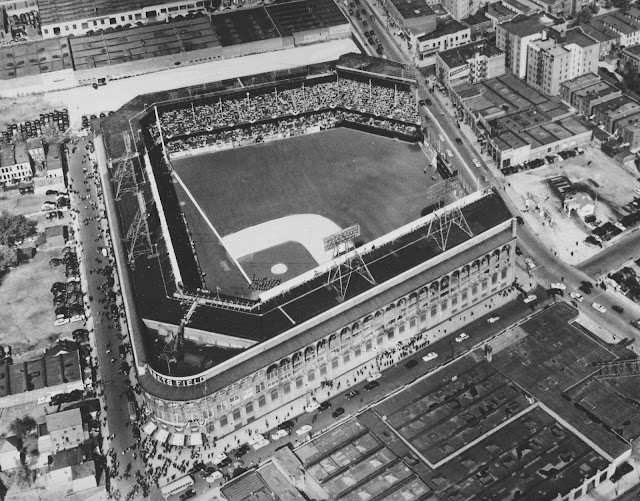 In an anonymous "Talk Of The Town" segment in the October 3, 1953 issue of The New Yorker, Peter Bunzel, Richard McCallister, and Brendan Gill collectively consider the fate of the home run balls hit over the right field fence at Ebbets Field. The Brooklyn Dodgers were a few years away from decamping to the West Coast, the field itself a bit further from demolition, but no one knew this yet. In describing how a home run ball caroms down Bedford Avenue and into its businesses, the writers unwittingly paint a portrait of a vanishing species: the neighborhood ball park.

"You know how, when somebody hits a home run in right ﬁeld at Ebbets Field, Red Barber describes the ball as clearing the fence and descending upon Bedford Avenue?" the writers begin casually. "Well, with the [1953 Yankees-Dodgers] Series descending upon us, we got to wondering what happens to all those out-of-the-park balls, so we went right over to Bedford Avenue and found out." What they discover isn't terribly surprising: a home run ball is worth some dough among the kids gathered outside the right field fence. "The best customers for souvenir baseballs are fathers eager to take something home to junior," Bunzel, McCallister, and Gill report. The player most likely to hit a homer for junior? Duke Snider.


A month or so ago, the Duke hit a home run over the right-center ﬁeld scoreboard that wrecked a window at Young Motors, a Plymouth-De Soto salesroom on the far side of Bedford Avenue. The Duke may have been taking it sort of easy that day. Ten or twelve times a summer, when he really puts his back into it, he knocks letters off the Young Motors sign, several feet above the show window. Everybody at Young Motors roots for the Duke, though. Glad to have the sign and window go in a good cause.

The "Talk of the Town" piece is packed with evocative details from the 'hood like this, the most remarkable—relative to today's game of distanced, multi-millionaire players—involving Dodger's Service Station at the corner of Bedford and Sullivan Place, just beyond the right field fence, where "nearly any first-class left-hand wallop is apt to end up hopping among the pumps. (Because the grandstand at Ebbets Field serves as a shield for the left-ﬁeld corner, most of the halls that land outside the park are hit by left-handers)." One of the station attendants related a particular great story:


...a couple of years back, and as sure as he was standing there, a home-run ball went through the roof of a convertible he was servicing, out the side window of the convertible, then rolled through the open door of the station and ended up against the belly of a cat who was asleep there and didn’t even bother to wake up-—just curled her paws around the ball and went on snoozing.

The roving reporters are then startled, when, "as the attendant was telling us these things, who should arrive in a powder-blue Cadillac but [Dodgers pitcher] Preacher Roe, with [pitcher] Carl Erskine on the seat beside him. 'Hi ya, Preach!' the attendant cried. Preach said to ﬁll her up."

Such stories make it too easy for me to grieve the loss of neighborhood parks like Ebbets (the site of which I recently visited); I can ignore the growing economic, urban, and cultural developments that ultimately made small town fields undesirable among owners (and many fans). But it's fun to think back to a time when many parks were built in cities, the dimensions of the outfield often oddly configured to the pre-existing streets and blocks themselves. There is still Fenway Park and Camden Yards, of course, and Wrigley Field, where a home run can bounce down a tree-lined street and end up on a front porch (or through an open door), but far more parks than not have substituted endless parking lots and easy-on/easy-off freeway access for ball-snuggling kitties and friendly, fill 'er up players, who might need you to check the oil while you're at it, thanks.

Digging around a bit, I discovered "Dodger Outfielder Snared Homer 100 Feet Outside Ebbets," by Paul Gould in the November 18, 1952 Brooklyn Daily Eagle (left). In his article Gould describes an incident very similar to what The New Yorker discovered a year later.

The story went like this: Dodgers fan Dick Williams, his injured shoulder in a sling, had parked his car at Dodger's Service Station, as many fans and even some Dodgers players did, and before he ventured into the park stopped to chat with the service station's owner, Adolph Friedel. "The third inning has just started when a roar—only too familiar to Dick's ears—cascaded across Flatbush [Avenue]. A home run was obviously on the fly."


The two—WilIlams and Friedel—had been chatting in front of the huge plate glass window. At the the burst of sound, they instinctively looked up. Sure enough, the ball—-smacked by [Boston Braves rookie Eddie] Mathews off Joe Black—was taking wing and heaving to. A second before it could crash into the window, Williams leaped high and with his good hand speared it.


But Matthews never knew of the off-the-record play and the Dodgers don't—until now— the bill they could have gotten far that window, some 400 feet from home plate. On another occasion, in practice, Rube Walker did smash it and the Dodgers paid. Cheerfully, too, as they are covered by insurance.

The article ends with another reason why neighborhood parks may have vanished. Friedel, a huge Dodgers fan, nonetheless witnessed a less happy side to local Dodgers adulation:


...dozens of kids black out his business by lining up to catch homers during the game and hundreds, afterward, swarm on the sidewalk for autographs. Business is shot.

"It's murder," Friedel muttered. "Gad, I love those Dodgers, but it's murder, that's what."

Joe - that would have been Boston BRAVES rookie Eddie Mathews. 1952 was their last year in Beantown before heading west for Bushville (Milwaukee).

Thank you! Of course. Corrected.

Great little article, and fine website. Thanks for the soulful eloquence!