I'd picked the Royals to beat the Mets in seven games, but the Series was over in five. This terrific photo by Anthony Causi—it's a Renaissance painting—evokes it all: the Royals' aggressive, opportunistic, impossible base-running; the Mets' series-long inability to catch and throw the ball consistently well; the anguish of managerial second guessing; the Queens' die-hard fans in disbelief; the pace, confidence, and joy of Series-winning baseball.

As a White Sox fan I actively root against the Royals during the season, but I couldn't help but love their style of play this year. Eric Hosmer's gutsy dash to home from third in the ninth tied the game, a ridiculous decision that issued from instantaneous, supreme confidence and a killer scouting report, the surprise of which forced Lucas Duda to make a rushed and errant throw to the plate, and will go down—it feels this way now, anyway; I'm gushing—as an all-timer in my postseason baseball memory scrapbook, alongside Fisk in 1975, Chambliss in '76, Reggie in '77 and '78, Kirby in '91, Bream in '92, Gonzalez in '01, Freese in '11 and the rest. If I were a youth baseball coach, I'd have my kids watch film of the 2015 Royals' postseason, if only to point out what to do and how what not to do is often the right thing to do, if you have the nerve and the luck. Congrats, Royals and Series MVP, the bruised but valiant Salvador Perez; my condolences, Mets. 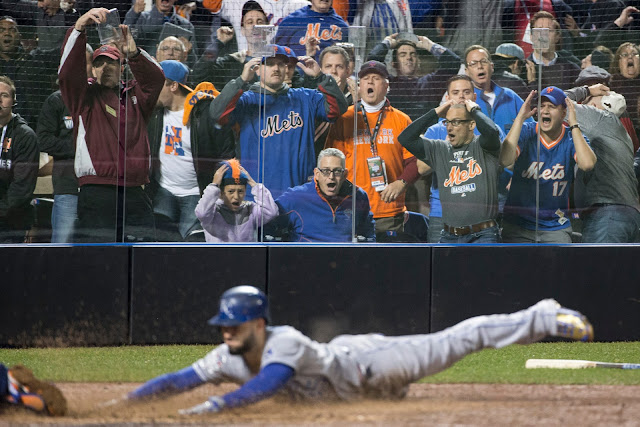 Photo by Anthony J. Causi via New York Post
Posted by Joe Bonomo at 9:36 AM