Neither pin-ups nor news-briefs: Crawdaddy! in 1966

Paste Magazine is currently housing the archives of Paul Williams's essential Crawdaddy!, the first American magazine devoted to writing about rock and roll. It's well worth your time to hang out in these virtual pages, which begin with the magazine's inception in 1966. Someone recently uploaded scans of the first couple years' worth of mimeographed issues here, and it's a kick to look at the stapled evidence of Williams and company's lo-fi labor of love. Here's the cover and page one of the first issue in which Williams—a freshman at Swarthmore College at the time—writes his manifesto with urgency and nervy confidence:


You are looking at the first issue of a magazine of rock and roll criticism. Crawdaddy will feature neither pin-ups not news-briefs: the specialty of this magazine is intelligent writing about pop music. Billboard, Cash Box, etc., serve very well as trade news magazines, but their idea of a review is: "a hard-driving rhythm number that should spiral rapidly up the charts just as (previous hit by same group) slides." And the teen magazines are devoted to rock and roll, but theit idea of discussion is a string of superlatives below a fold-out photograph. Crawdaddy believes that someone in the United States might be interested in what others have to say about the music they like.

A paragraph later, he gets to the heart of things:


The aim of this magazine is readability. We are trying to appeal to people interested in rock and roll, both professionally and casually. If we could predict the exact amount of sales of each record we heard, it would not interest us to do so. If we could somehow pat every single pop artist on the back in a manner calculated to please him and his fans, we could not bother.

Get off my cloud, indeed. Among the writers who appeared in Crawdaddy!'s early issues were Jon Landau, Sandy Pearlman, Richard Meltzer, and Peter Guralnick. 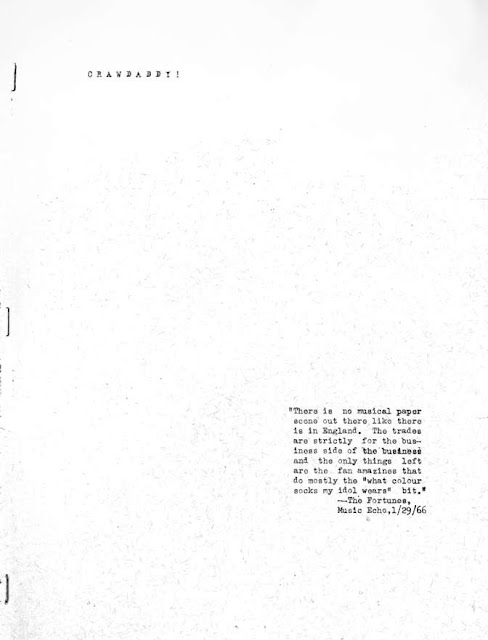 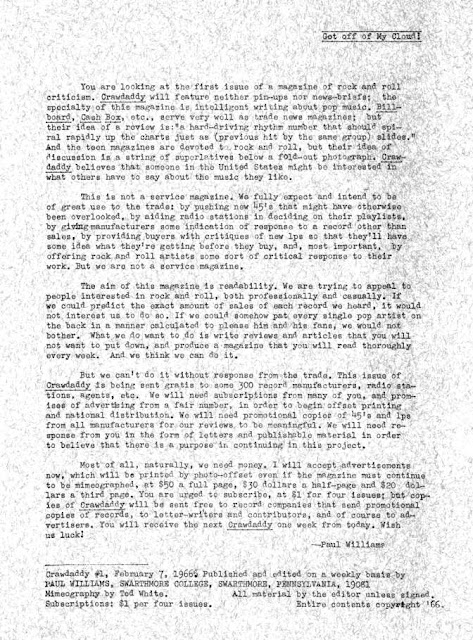