The story of Russ Mann, jukebox singles, and the hits that never were 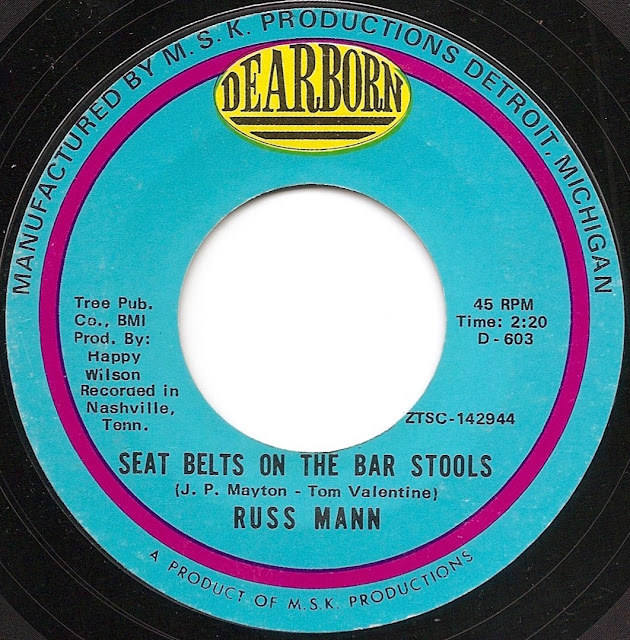 Pull up a stool. And buckle up.

Who is Russ Mann? You got me. I can't find a picture of the guy, but I know that he released a handful of singles in the late 1960s and early 1970s on the Detroit-based Dearborn label, an imprint of Martin & Synder Distributing that produced many 45s exclusively for jukeboxes. In a long tradition, so-called jukebox labels worked with manufacturers and bar owners to stock jukeboxes with singles, many of them novelty, seasonal or, as in Mann's case, environmentally-topical songs. Mann sang songs about drinking in bars, and you headed to your favorite tavern to hear them. From what I can gather, Mann enjoyed little to no success on the airwaves; diverted to honky-tonks, his songs were limited to those who heard or didn't hear them as they were sent across the heads of drunks, regulars and newcomers alike. Although jukebox labels benefited from the loose change of tipsy tavern-dwellers, the owners of the labels eyed the far more lucrative radio market, but it was tough to crack for even top-selling jukebox-only singles. In the January 30, 1971 issue of Billboard, L&R One-Stop manager Rick Eliot lamented this, saying, "We have singles that sell in quantities of 12,000 to l5,000 copies that never get aired." Elliot added that, though records sell in heavy quantity to jukebox programmers, they receive little radio airplay.


"This creates a problem," he said, “because jukebox programmers will come back to us complaining that play doesn't continue without airplay support."
He said perhaps stations lean away from records on small labels. "I just don't understand it," he said. 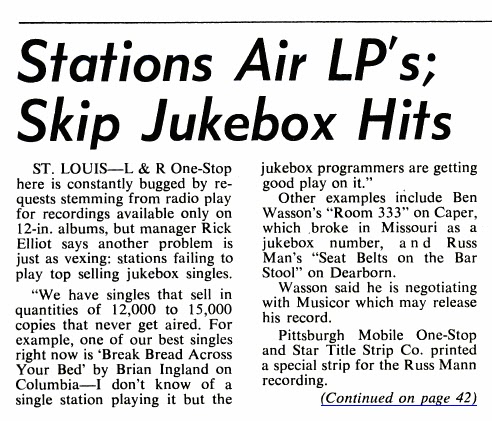 Alas, poor Russ Mann was fated to be a name trapped under smudged glass, a singer limited to the four walls of a bar and the suspect memories of hungover patrons. Surely fame of a sort, but dwarfed by that earned on Music Row. The blur of this reproduction from a January 9, 1971 Billboard article seems grimly appropriate to the bleary-eyed guy choosing Mann's song at last call:

A natural for country jukebox programming, but not for the airwaves? Here are three of Mann's singles, spanning 1968 to 1971. Written by J.P. Mayton and Tom Valentine, released on Dearborn in 1971, "Seatbelts On The Bar Stools" is a terrific slice of old-school honky-tonk, a well-played drinking song that masks the darkness of alcoholism with light of whimsy—that old story.:


His 1968 debut for Dearborn, "Hello Jukebox," written by Carl Knight, begins with a happy hour lament:


And a 1970 single, also written by Knight, employs a poetic title to tell another story as old as dirt, the pedal steel guitar as stinging as a hangover in the morning:


For the perfect reading accompaniment to Mann's tune I recommend the essential Honky Tonk: Portraits of Country Music by Henry Horenstein. Here are two of the many terrific photos in the book: 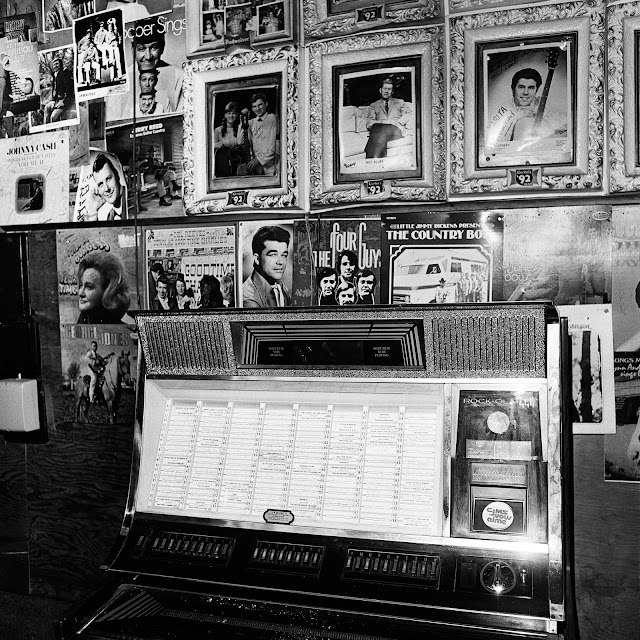 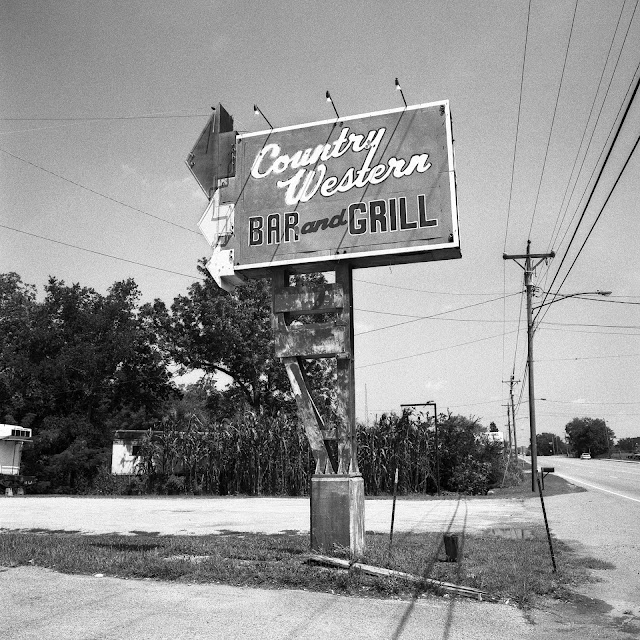 Note: Mann's story calls to my mind Dave Edmunds's "A. 1. On The Jukebox," a great tune that Edmunds co-wrote with Will Birch, of The Records, for his Trax On Wax 4 album, released in 1978. I'm not sure that the vexed fate of the "big Wurlitzer star" has ever been told so well. Nowhere on the charts, indeed:

Russ Mann was a neighbor of mine while growing up as a young boy in gahanna ohio in the mid 60's.I hardly knew him but was aware that he was trying to make it as a country singer.I think he moved away and I always wondered what happened to him when I came upon his obituary from 2010.