Bo and the Stooges Across the USA 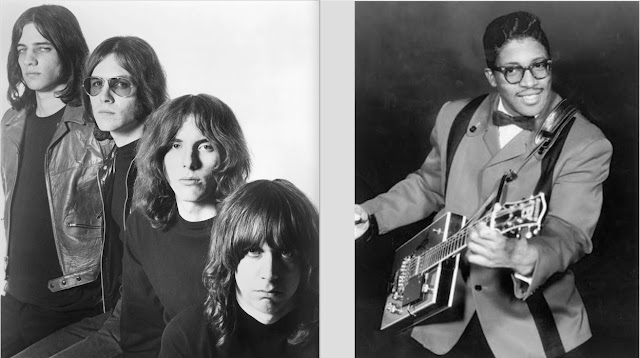 The Stooges belong on the long, long list of artists who wouldn't have existed—or, would've existed in a very different way—without Bo Diddley, whose rhythmic propulsion, humor, and general bad-ass-ery they grabbed, dismantled, and put together again in their Detroit factory of rock and roll and blooze. This isn't news, but I was graphically reminded again of the debt Iggy and his band owed to Ellas McDaniel when "1969" came on shuffle today:


The year this staggering song was released, Diddley made this oft-quoted observation on the Pop Chroincles radio documentary: "I used to get mad about people recording my things; now I got a new thing going.... I don't get mad about them recording my material because they keep me alive."

Nearly half a century later Iggy Pop, in his BBC Music John Peel speech at the Radio Festival, discussed "a type of entrepreneur who functions as a kind of popular music patron of the arts....someone, usually the product of successful, enlightened parents, who owns a record company, but has had benefit of a very good education, and can see a bigger picture than a petty business person." Their precursors, Pop sniffed, are "the old time record crooks [who] just made it their business to make great, great records, but also to rip off the artist 100%, copyright, publishing, royalty splits, agency fees, you name it. If anyone complained the line was 'Pay you? We worship you!' God bless Bo Diddley."

What was The Originator up to in '69 besides claiming his legacy in print? Doing it in the studio, too.