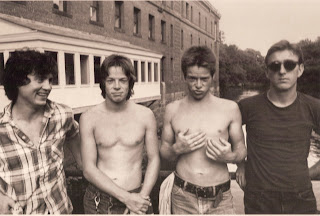 I saw the Dogmatics once or twice in the mid-1980s in Washington D.C., marveling at the barreling energy and loud grins they brought down with them down from Boston. They played rock and roll that threatened to fall apart at the end of each measure, rollicking, good-natured, broken-string slop that wasn't absent of hooks, craft, or sentiment. I associated them with a handful of other Boston-area bands I liked, including Lyres, Barrence Whitfield and The Savages, Scruffy The Cat, The Turbines, The Prime Movers, and especially The Oysters who played, the one time I saw them, as if it was their final desperate hurrah. (It wasn't. They played the next night somewhere.) The Dogmatics' bass player Paul O’Halloran died tragically in a motorcycle accident on October 23, 1986, but I learned of it sometime later through the slow-moving 'zine/gossip grapevine that was the 1980s equivalent of a chat room. The band called it quits soon after that, having released a one-off single and two terrific mini LPs (those songs and some compilation appearances were collected in 2008 on the CD 1981-86). I'll always have great affection for The Dogmatics and their urgent, beery shows and the songs they wrote that straddled noisy, adolescent silliness with grown-up reckoning—a pretty good definition of rock and roll, in my book.

Email ThisBlogThis!Share to TwitterShare to FacebookShare to Pinterest
Labels: 1980s, boston, live shows, rock and roll, the dogmatics, the oysters