"One tends to look back and get more personal": William Harrison comes clean

In a fascinating and revealing essay published in Antaeus in 1982, and later collected in the anthology The Autobiographical Eye, fiction writer William Harrison writes about his discomfort with autobiography. In the plainly-titled but expressionistic "Why I Am Not An Autobiographical Writer," Harrison offers a brief, segmented history of his ambivalence with the first-person impulse, describing as especially notable his early love for self-erasing journalistic writing:


At the university there were girls in cashmere sweaters, football, Russian novels and seriousness. But most of all there was journalism; I became a newspaperman in spirit, believing like a fanatic in the devices of a more objective prose. A good reporter, I asserted, looked around for something of consequence: the story on his beat. The reporter was a camera, yet more: his eye should be so sharp, I proclaimed, that it pierced all sentimentalities, postures, clichés, and lies. This ideal writer, I knew, should never talk about himself; for him, the first person pronoun should always be a natural embarrassment.
Oddly enough, my view holds. I ﬁnd that I have little patience with authors who confess, who pose as prophets of the ﬂesh in their insipid fantasies, who sentimentalize their domestic complaints in long novels or who abandon storytelling altogether for an esoteria of games and posturings.
“Pour out your heart!” cry the authors and critics of recent years.
Yet one needn’t write just in order to engrave his signature on existence; history both current and past has lots of stories and signatures to record. More is needed of a wordsmith than just his introspective scrawl.

This seems inarguable, but Harrison lays it on; the next segment begins with the deathly statement: "Fame is a vanity of assassins." He continues:


It is also an American poison.
The writers I admire have learned to sit quietly in the dark, content and creative in that little movie house inside themselves.

Harrison goes back to his childhood and adolescence to explain his origins as a writer who's more interested in the lives of others than his own. He recalls attending the Astor Theater in Dallas, where he was born and raised:


My life as a writer probably began in the Astor Theater across the street from my father’s barber shop in a seedy neighborhood in Dallas. The telephone poles leaned in odd directions there on Bishop Avenue, slanting this way and that, wires crossing the sky. The Texaco station on the corner wore its mounds of dried grease. The barber shop smelled of bay rum and talcum.
On Saturday nights my father worked late, then joined my mother and me in the popcorn darkness of the old movie house. She would give him the homemade sandwich wrapped in loud tissue paper. He would eat some of my popcorn and a candy bar, then fall asleep while Gary Cooper, Fred Astaire or Spencer Tracy ﬂickered before our eyes. He would slump beside us, eyes closed, mouth slightly open, with a smear of chocolate on his barber’s smock.
In the Astor Theater, for me, the world announced itself: the grim war images on Movietone News, the glamour of Carole Lombard, the art of Citizen Kane—which my mother liked and my father didn't, sparking off the ﬁrst discussion of aesthetics ever held in my presence. Beyond that little movie house our overgrown lawns and frame houses awaited me; my school was a red brick calamity; our lives seemed excruciatingly modest and I felt certain that the world beyond, the one in the movies which was both more real and more perfectly imagined, was somehow more various and more mysteriously important than we were. 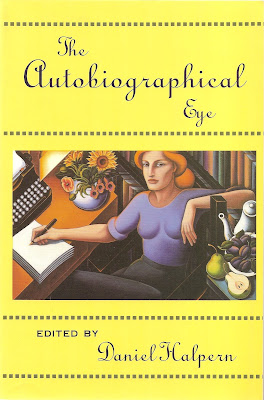 He goes on to describe his mother's scrapbooks, packed with "Aunts, faraway cousins, birthday cards, school notices, newspaper clippings, photos and snippets of inspirational poetry: she pasted everything into those pages. Mixed in with the usual family-album items were pictures and words of Churchill, Bogart, King George, Di Maggio [sic], Garbo, Roosevelt, Barrymore, Dempsey and hundreds of others. I seemed to know these people." He recalls his mother showing him a drawing of the Lindbergh house, describing how the colonel and his wife sat to eat while a kidnapper carried the  baby down a ladder from the bedroom upstairs. Others' stories impressed upon him something of the shared experience of the human condition: "That drawing, accompanied by a note in my mother’s handwriting stating that Bruno Hauptmann was convicted for the crime on circumstantial evidence, became part of the family’s documents."

Of growing up in the theatrical immensity of his home state, he writes: "I assumed that I was on stage, too—not in the spotlight, yet present."

The brief essay features economical, aphoristic touches, such as: "The lover knows he loves, not because he examines himself in the experience, but precisely because he fails to do so." And: "The teachers I admire don’t hide from their students, but have magical ways and rough tricks by which they fold themselves into their subjects and disappear."

Harrison ends his essay with a confession of sorts:


In more than twenty years of writing these are the ﬁrst boldly personal words—pronouns and all—I’ve written; I find that I can only just barely make my peace with them, as one suffers an old snapshot of himself when he was photographed too skinny, too pensive, too odd.

But in wonderful essayistic fashion, he can't help but indict himself in a moment of self-interrogation:


But a last observation.
Mine has always been the greater vanity; I have believed that other people’s stories have been mine to tell.

What's great about Harrison's essay is the disarming—and, I think, charming—way it subverts itself. The essay is packed with sensuous, evocative details of Harrison's own past—people, events, places, things—that, though they're arranged rhetorically as an argument against autobiography, end up revealing the very stuff of which Harrison is made. Even an essay against autobiography can't escape the pleasures of the self, of looking back and reckoning.

In 2010, Harrison published Mutations of Rollerball, a collection of essays. In the foreword, referencing this essay, he admits, grudgingly, "As time passes one tends to look back and get more personal." Indeed. 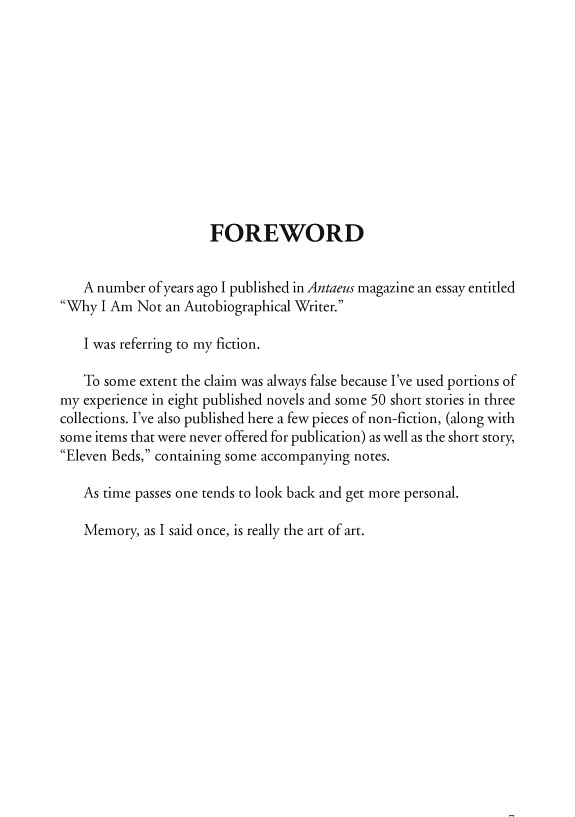