Dueling on the South Side

Baseball rewards in many ways. I caught the White Sox/Blue Jays game at US Cellular Field last night, hopeful to witness history. Sox starter Chris Sale was trying to become the only pitcher in MLB history to throw nine consecutive games with ten or more strikeouts. At game time he shared the record of eight games with the great Pedro Martinez, who managed the feat in 1999; at the end of the game last night, Sale remained tied. He fanned six Blue Jays, a consequence of possessing less-than-stellar stuff against the best hitting team in the majors that swung aggressively at many early pitches in counts. Those fans with Sox-distributed "K" signs couldn't raise their arms in jubilation as often as they wished. The Blue Jays put the ball in play often throughout the evening, and the crowd's audible disappointments—my own included—at sharply-hit grounders and high pop-ups soon diminished in light of the real story: a great pitching duel between Sale and former White Sox and SouthSide-beloved pitcher Mark Buehrle.

I debated driving in from DeKalb for the game because the weather prediction was ghastly. I didn't want to miss the chance, though, and was rewarded with a beautiful cloudy evening with only a couple dozen major raindrops starting in the seventh. We were fortunate that Buehrle was pitching: the game was over in under two hours, the shortest nine-inning game in four years, and as I drove back to DeKalb the rains were Biblically awful. But helping me in the storms were bright memories of the game, a taut, exciting contest of two ace pitchers solving offenses and benefiting from stout defense. The first five Blue Jays outs were handled by Sox shortstop Alexei Ramirez, whose defense has been ugly this year but who played sterlingly last night; Buehrle deflected a sharp grounder off of his body which shot toward All-Star third basemen Josh Donaldson who bare-handed the ball and threw out the runner; Blue Jays center fielder Kevin Pillar robbed Tyler Flowers of a homer by going up the wall in deep center and nabbing the ball inches above the top. It was that kind of night: economical, with potential bursts of offense. Something had to give. The White Sox had scored one run off of the efficient Buehrle through seven and two-thirds innings but then, aided by an error by the sure-handed Jose Reyes and sudden confidence at the plate, scored three runs in the eighth with two out, the last two coming on a thrilling just-inside-the-line double by Melky Cabrera past Donaldson that scored Adam Eaton and local hero Jose Abreu. That's baseball! The Cell erupted. One of my favorite things is the walk down the ramp after a victory, the whoops and cheers from the fans sounding all around.

I came for history, and settled for a classic game. I'll take that every time. 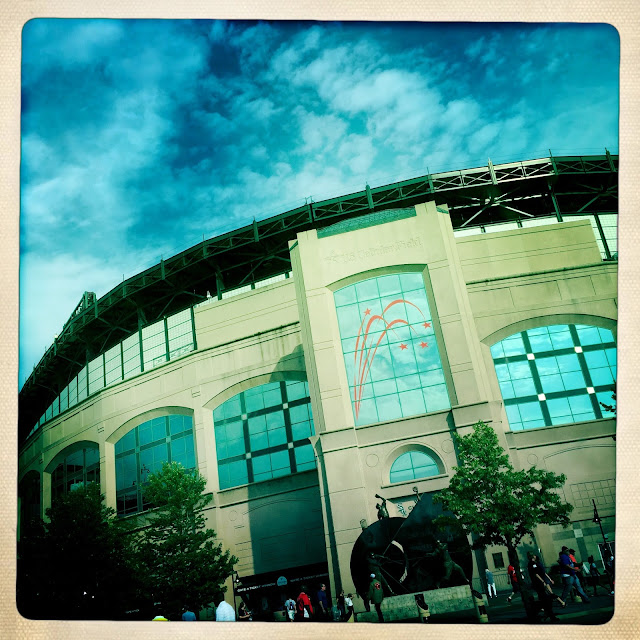 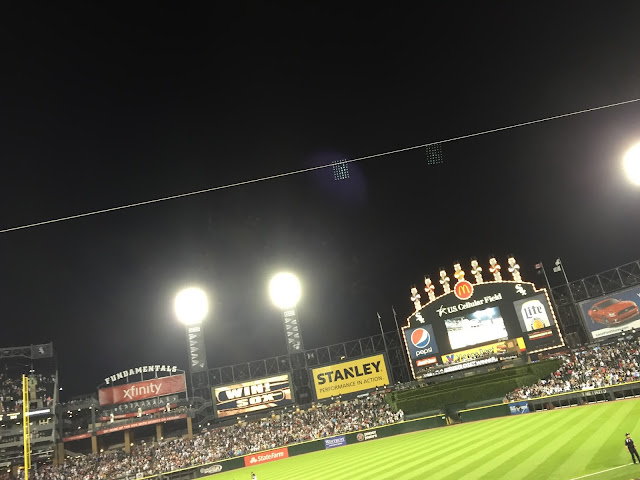