After Many Years Away 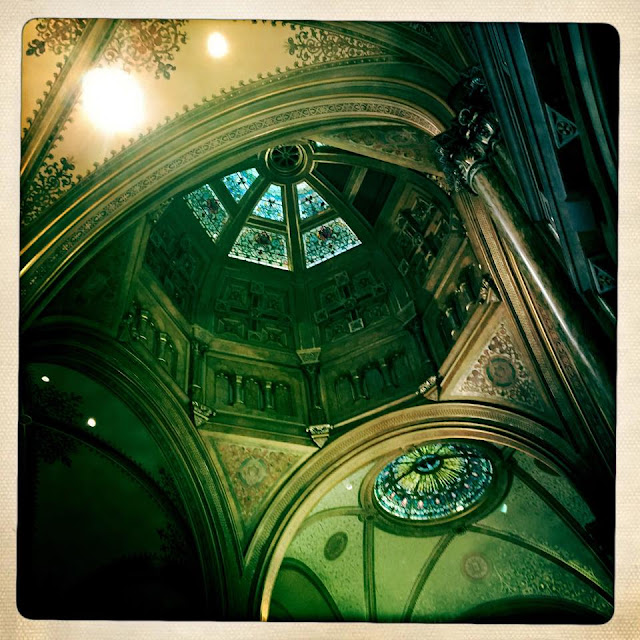 Yesterday I attended mass at Mary of the Angels Chapel in ‎LaCrosse‬, Wisconsin‬, my first service in many years, and found myself, as always, responding to the experience aesthetically rather than spiritually. As an agnostic I feel burdened by my essayist's mind, a skeptical ear tuned to the readings, homily, and prayers, wondering if reverence for art isn't a kind of worship, casting a discerning critical eye over the church's columns and arches and windows and paintings and, during the responsorial psalm—Psalm 40—drifting toward contemplation of the pretty melody, the relative talents of the solemn high school choir singers, two girls and two boys, and imagining narrative scenarios among them: the flutist in the second row closeted, the girl crushing on the boy but unable to admit it, ripening bodies betraying the Word all over the place. I elected not to receive communion, as it would've been received as a novelty, not as sacrament, and so sat with the others who declined, because of denominational requirements, fussy children, or perhaps a distance from faith similar to my own. But the beauty of the building and of belief! To my vague disappointment I felt again the rote responses from the congregation as dispiritedly mechanical but this is a childish complaint: what do I expect, speaking in tongues? An outsider, I dwelt in the outsider's occasional mien of lonely self-pity, steeling myself against active belief with secular nonchalance. Stray fragments of adolescent churchgoing drifted in: imagining the women's bodies under their Sunday best; the serene and scalp-tingling pleasures of the sibilant s-sounds in the Lord's Prayer, blocking out all other epiphanies; a mental wandering off from the interior place of worship to the outside world, green and breezy and full of people moving sensually toward desires of the body and mind. Half a century old, I resisted such childish distractions at Mary of the Angels, but they came. I mumbled prayers, crossed myself out of habit, stared at the ceiling, and departed. Look how far I've gone. Maybe one day I'll come back and revise this mini-essay, this half-embarrassed confession, from a more devout place, but that feels unlikely, drawn as far away as I am from one faith to another.
Posted by Joe Bonomo at 3:15 PM