"You gotta have soul, baby" 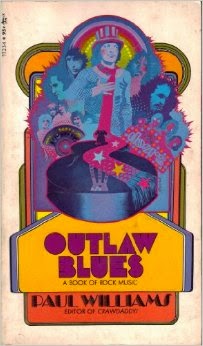 The late Paul Williams founded Crawdaddy! magazine in 1966, and was one of the first to elevate rock and roll as a subject worth essaying and having fun with on intellectual terms. (1966-1968 archives of Crawdaddy! can be found here.) This excerpt from "How Rock Communicates," published in 1969 in Williams's first book, Outlaw Blues: A Book Of Rock Music, is certainly of its era. Peer through the druggy vibe and the tone of 3 a.m. dorm-room heavy-rapping, and what Williams is saying about the emotional immediacy of rock and roll and the myth of virtuosity is good stuff.


Communication is transportation (uh, I’m just fooling around here; I wouldn’t want to perpetrate new slogans). Time and space are things to pass through, art is the rearranging of the universe into patterns reﬂecting the artist’s will. Message is a speciﬁc thing, a discernible thing. Will is not. Few artists deal with messages, few artists expect you to go at the physical body 0f their work with a scalpel and attempt to extract its essence. The artist’s emotions and sense perceptions are transmitted by means of his work. He receives, and he sends so that you may receive. The medium is not important. The medium is inanimate, an object. What you receive—not a message, not a specific, but a sum of messages, an emotion, a vision, a perception—is a part of the artist. It’s alive. It’s reborn in you. Music. The notes are not important. Virtuosity means nothing. No one cares how well you rearrange the objects. You gotta have soul, baby, which just means it’s gotta be you you’re passing on, people receiving parts of people, living matter, animate stuff. The medium and the messages it contains are just so much nothing, trees falling in the forest with no one to hear, unless there is human life on both ends of the line, sending, receiving, transferring bits of human consciousness from one soul to another. Communication is the interaction between our personal worlds.

And then, he writes, he put on a Byrds album. Salud.