In an era of rapid New York City transformation and consequent losses, and the very public grieving of those losses, it's worth taking a look at Edward Hoagland's essay "City Walking," which appeared in the New York Times Book Review on June 1, 1975 and was collected in Hoagland's collection Heart's Desire in 1988. Hoagland's brief piece is in the long tradition of tributes to walking Manhattan. In the humid and difficult mid-1970s, of course, perambulating the island was a considerably riskier proposition than it was before and than it is now. But the intrepid walker that Hoagland is, he ventures out to embrace the freedom and the dangers, in the process offering a gift to his future 21st Century readers: a redolent, tactile stroll dicey, long-gone Manhattan.

"There is a time of life somewhere between the sullen fugues of adolescence and the retrenchments of middle age when human nature becomes so absolutely absorbing one wants to be in the city constantly, even at the height of the summer," he begins. "Nature can’t seem to hold a candle to it."


One gobbles the blocks, and if the weather is sweaty, so much the better; it brings everybody else out too. To the enthusiast’s eye, what might later look to be human avarice is simply energy, brutality is strength, ambition is not wearisome or repellent or even alarming. In my own case, aiming to be a writer, I knew that every mile I walked, the better writer I’d be; and I went to Twentieth Street and the Hudson River to smell the yeasty redolence of the Nabisco factory, and to West Twelfth Street to sniff the police stables. In the meat—market district nearby, if a tyro complained that his back ached, the saying was “Don’t bleed on me!”

Hoagland reminds us of the losses that are always endemic to progress in a major city:


Down close to the Battery the banana boats used to unload (now they are processed in Albany). Banana boats were the very deﬁnition of sea-going grubbiness, but bejeweled snakes could be discovered aboard which had arrived from the tropics as stowaways. On Bleecker Street you could get a dozen clams on the half shell for ﬁfty cents if you ate them outdoors; and on Avenue A, piroshki, kielbasa, and suchlike. Kids still swam from piers west of the theater‘ district in the Hudson and under Brooklyn Bridge, and I was on the lookout among them for Huckleberry Finn. He was there, all right, diving in, then scrambling up a piling, spitting water because he hadn’t quite learned how to swim. In the evening I saw him again on Delancey Street, caught by the ear by a storekeeper for pilfering.

Oh yes, oh yes! one says, revisiting these old walking neighborhoods. Yorkville, Inwood, Columbus Avenue. Our New York sky is not muscular with cloud formations as is San Francisco’s, or as green-smelling as London’s, and rounding a corner here, one doesn’t stop stock-still to gaze at the buildings as in Venice. The bartenders like to boast that in this city we have “the best and worst,” yet intelligent conversation, for example, is mostly ad-libbed and comes in ﬁts and starts, anywhere or nowhere; one cannot trot out of an evening and go looking for it. We have our famous New York energy instead, as well as its reverse, which is the keening misery, the special New York craziness, as if every thirteenth person standing on the street is wearing a gauzy hospital smock and paper shower slippers.

The mention of New York's "keening misery" sends Hoagland down some of the sorry streets of 1975 Manhattan: "Edmund G. Love wrote a good city walker’s book some years called Subways Are for Sleeping. Indeed they were, but now if the transit police didn’t prevent old bums from snoozing the night away while rumbling back and forth from Brooklyn to the Bronx, somebody would set them on ﬁre."


Up the street hunting parties are abroad, whom the walker must take cognizance of; it’s not enough to have your historical guidebook and go maundering about to the Old Merchant’s House on East Forth Street. A pair of bravos will ask you for a light and want a light; another pair, when your hands are in your pockets, will slug you. If you’re lucky they will slug you; the old bar ﬁghters complain about how risky ﬁghting has become. You must have a considerable feel for these things, an extra sense, eyes in the back of your head: or call it a walker’s emotional range. You must know when a pistol pointed at you playfully by a ten-year-old is a cap pistol and when it’s not; whether someone coming toward you with a broken bottle is really going for you or not. We have grown to be students of police work—watching a bank robber scram as the squad cars converge, watching a burglar tackled, watching four hoodlums unmercifully beating a cop until four patrol cars scream to a halt and eight policemen club down the hoods.

Nevertheless, if you ask people who have some choice in the matter why they live in a particular neighborhood, one answer they will give is that they “like to walk.” Walking is a universal form of exercise, not age—oriented or bound to any national heritage, and costs and implies nothing except maybe a tolerant heart. Like other sports, it calls for a good eye as well as cheerful legs—those chunky gluteus muscles that are the butt of mankind’s oldest jokes—because the rhythm of walking is in the sights and one’s response as much as simply in how one steps.

After predicting that walking will catch on in the suburbs, Hoagland recounts a time he'd recently been loafing on the docks of a Mississippi river town, watching young boys straight out of Huckleberry Finn dare each other to drink the water, a melancholy thing for Hoagland to witness, so distanced, he feels, are so many Americans from their vibrant natural surroundings. (And, no, walking didn't catch on in suburbia.)

"Now, muggers are herd creatures like the rest of us; they too have a 'rush hour'," Hoagland laments in closing. "So if a walker is indeed an individualist there is nowhere he can’t go at dawn and not many places he can’t go at noon. But just as it demeans life to live alongside a great river you can no longer swim in or drink from, to be crowded into the safer areas and hours takes much of the gloss off walking—one sport you shouldn’t have to reserve a time and a court for." 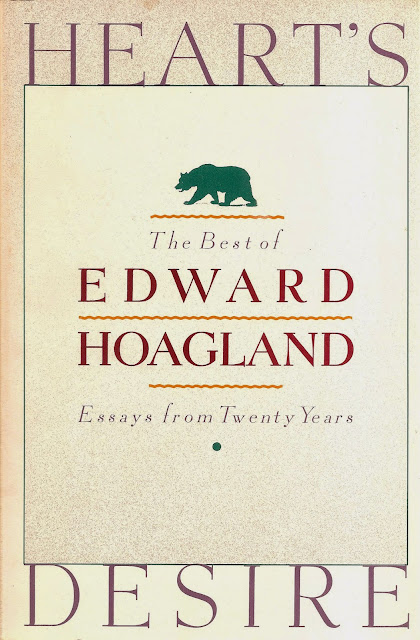