Peter Handke and the Essay that Refuses to Become an Essay 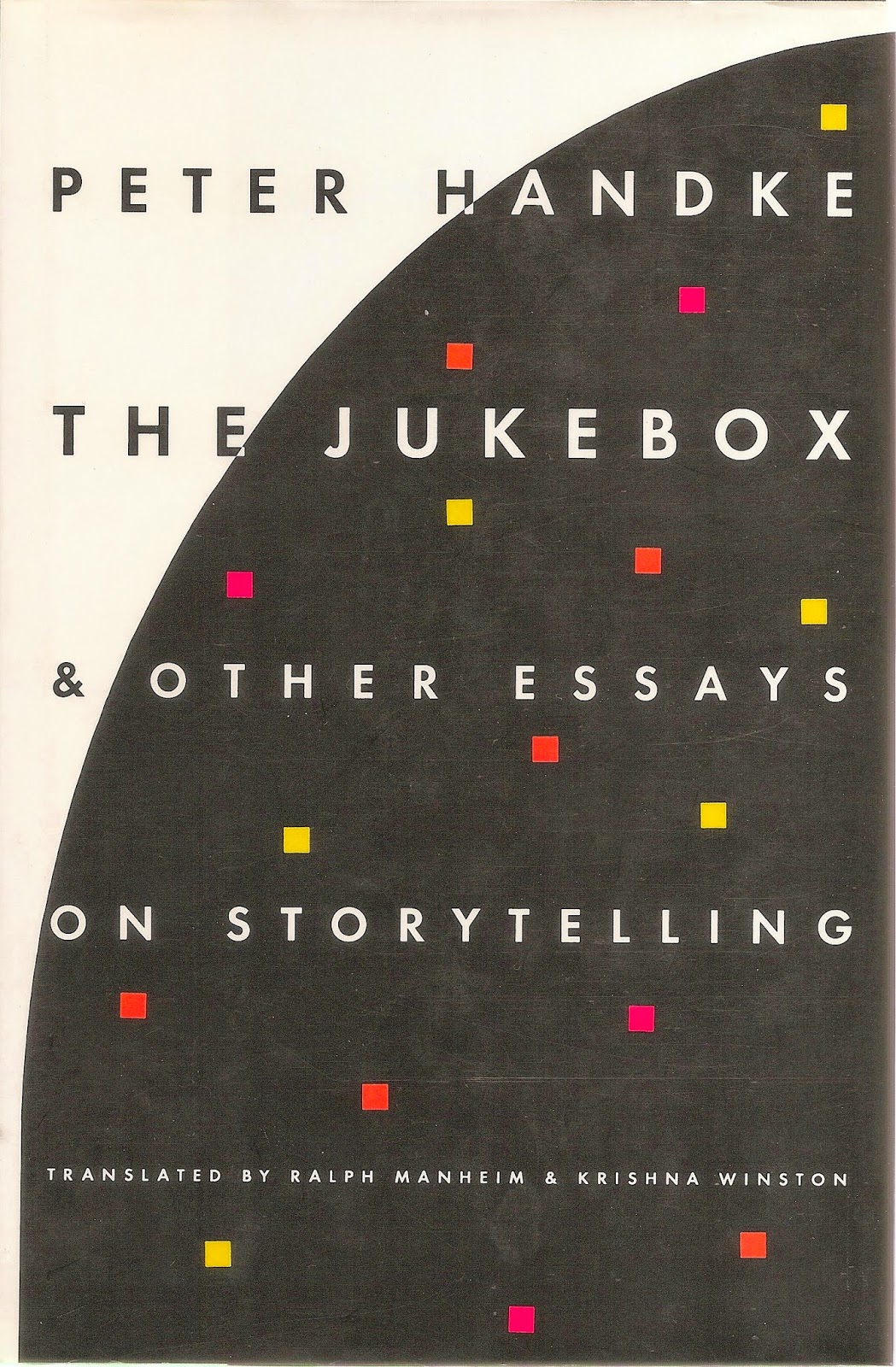 In the middle of Peter Handke's "The Jukebox," the second of three lengthy essays in The Jukebox & Other Essays On Storytelling, the author interrupts himself, yet again. It's the late 1980s, and he's writing about his experiences writing about—or more accurately, not writing about—an essay on jukeboxes, those beloved, magical "music boxes" of his adolescence that scored mystery and clarity alike. The essay is torturous in that in dramatizes a tortuous attempt to do anything but achieve a goal; Handke can't bring himself to really start the essay, so distracted is he by travels throughout Europe (primarily Spain), hotels, long, brooding walks toward city centers and along city edges, historical moments, ennui, memories, fantasy, and writer's block. Essayistically, the essay becomes an essay about not-essay-writing. Rising to the surface of Handke's consciousness is the occasional memory—a jukebox in a cafe near a park; one in a dive in Anchorage, Alaska; a busted one in Tokyo, some of the recollections leading to brief narratives, others remaining inscrutable memory-shards—but the majority of the essay wanders away from its ostensible subject, which makes the piece both frustrating and fantastic. It's startling to see the Beatles or Credence Clearwater Revival or Madonna referenced in the middle of an essay so clouded by doubt and uncertainty; it's as if a jukebox was suddenly flicked on and a song begins, cutting through.

Throughout his essay, Handke refers to himself in the third-person, as if to distance himself from his own nagging neuroses and doubts, or perhaps to gain some measure of distance that might allow writerly chaos to assume stability. Midway through, he offers a potential shape for the essay that he hopes at some point will materialize. It's as good a take on the subversive, absurd, theatrical, impossible possibilities of the essay-genre that I've seen in a while. Are you buckled up?


When he ﬁrst had the inspiration—that’s what it was—which at once made sense to him—of writing an "essay on the jukebox," he had pictured it as a dialogue onstage this object, and what it could mean to an individual, was for most people so bizarre that an idea presented itself: having one person, a sort of audience representative, assume the role of interrogator, and a second appear as an “expert” on the subject, in contrast to Platonic dialogues, where the one who asked the questions, Socrates, secretly knew more about the problem than the other, who, puffed up with preconceptions, at least at the beginning, claimed to know the answer; perhaps it would be most effective if the expert, too, discovered only when he had to ﬁeld the other’s questions what the relative “place value” of these props had been in the drama of his life. In the course of time the stage dialogue faded from his mind, and the “essay” hovered before him as an unconnected composite of many different forms of writing, corresponding to the—what should he call it—uneven? arrhythmic? Ways in which he had experienced a jukebox and remembered it: momentary images should alternate with blow-by-blow narratives, suddenly broken off; mere jottings would be followed by a detailed reportage about a single music box, together with a speciﬁc locale; from a pad of notes would come, without transition, a leap to one with quotations, which, again without transition, without harmonizing linkage, would make way perhaps to a litany-like recitation of the titles and singers listed on a particular ﬁnd—he pictured, as the underlying form that would give the whole thing a sort of coherence, the question-and-answer play recurring periodically, though in fragmentary fashion, and receding again, joined by similarly fragmentary ﬁlmed scenes, each organized around a different jukebox, from which would emanate all sorts of happenings or a still life, in ever widening circles—which could extend as far as a different country, or only to the beech at the end of a railroad platform. He hoped he could have his “essay” fade out with a “Ballad of the Jukebox,” a singable, so to speak “rounded” song about this thing, though only if, after all the leaps in imagery, it emerged on its own.

Email ThisBlogThis!Share to TwitterShare to FacebookShare to Pinterest
Labels: essay, essays, music, peter handke, the jukebox, the jukebox & other essays on storytelling, writing

Pure Hanke mannerism; he does it masterfully in his memoir of his mother's suicide A Sorrow Beyond Dreams, constantly interrupting the narrative to question his motives. Love.

Yep. ASBD is great. I weighed in here a while back: