Shortly after Hank Williams's death in 1953, MGM Records released "Kaw-Liga." The song stayed at the top spot on the Billboard Country chart for over three months. The b-side, "Your Cheatin' Heart," remained at No. 1 on the Country chart for a month and two weeks, and has become one of Williams's signature tunes. 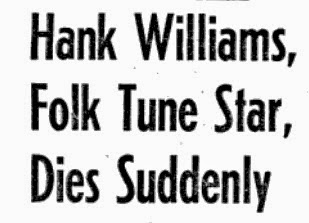 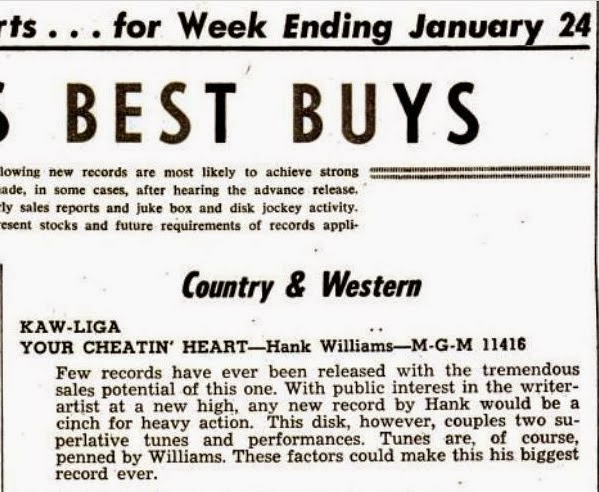 Williams' head-hanging, desperately-confident song has been covered my countless artists since its release. These three versions suggest the vast range covered by heartache, jealousy, and bitterness:

Jerry Lee Lewis recorded a version of "Your Cheatin' Heart" during his Sun and Smash Records tenures, but it's his sorrowful reading onstage in front of the rowdy, beer-bawling crowd at the Star-Club in Hamburg, West Germany on April 5, 1964 that will stand:

In late 1969 James Brown cut an album with the Louie Bellson Orchestra, with Oliver Nelson conducting. Bellson was a jazz drummer, bandleader, arranger, and composer, usually credited with being the first to play with two bass drums, and on "Your Cheatin' Heart" his 18-piece orchestra swings hard behind Brown—J.B.'s longtime sax player Maceo Parker was along for the ride, too—amping up the swagger that was lost in the fumes of regret and pain in Williams's original. This is a ridiculously good performance, Brown at his screeching, strutting, confident best. His vocal, elevated by the orchestra's giant sound, may sacrifice some emotional subtly for brashness—but there's room in there for the heart, too.

Finally, Beck's performance from the 2001 Williams tribute album Timeless goes the other way, the sound of 3 a.m., sleepless, numbed pain too late for any kind of hollow victory: