Disrespectfully Yours: Porter at the Bottom 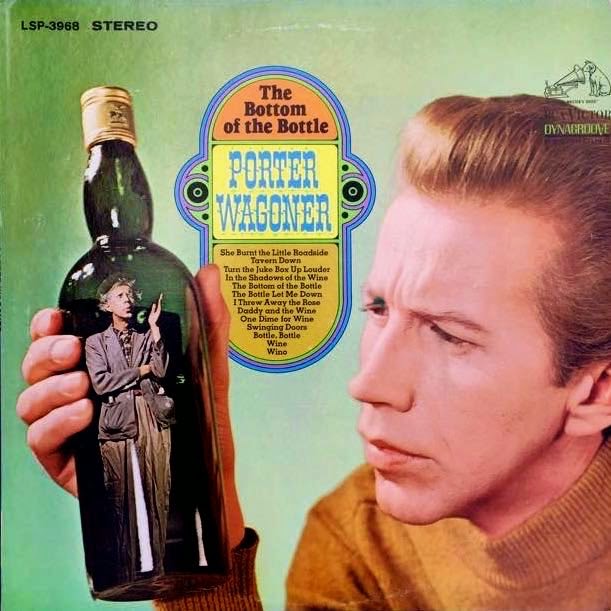 I've long found myself drawn to country music produced in the 1960s. As the so-called "Nashville Sound" was taking over, replacing fiddles with strings and supplementing lone warbling with female-backed choruses, there were a few men and women still devoted to the kind of honky-tonk that was quickly becoming unfashionable. In the 1970s, as the temptation of the pop crossover chart hit became too tough to resist, the music produced in Nashville became watered down, mild, its rough twangy edges smoothed over. There were, of course, rebellions: the Outlaw Country movement arose in part as a response to a market- and label-driven uniformity that was harming country music's ornery soul, though Jennings, Shaver, Willie, et al, smoked a lot of weed and to my ears (and eyes) were pretty laid-back; by the late-70s and early-80s when Gary Stewart was charting with honky tonk songs about drinking he was considered a kind of revivalist. In the mid-1960s, country music could still be commercial (aspirationally, anyway) but hard and hillbilly-twangy, its pedal steel guitars wailing; the mainstream wasn't quite so soft.

Porter Wagoner is an interesting figure in this regard. By the time of his death in 2007 he'd seemed to certain generations like a permanent old-timer—the way your grandfather seemed like he was always 70 to you when you were a kid. But before Wagoner was the hit-making Svengali to Dolly Parton, the host of safe, middle-of-the road television talk shows on TNT, and the Grand Ole Opry tourism spokesmen, he cut a series of albums for RCA that took on despondency, heartache and alcohol abuse. These albums are as famous for their striking covers as for their music, but each album has a handful of terrific, if borderline corny, songs about the human condition. His 1968 album The Bottom Of The Bottle, a collection of "Skid-Row Joe"-delivered tunes about drinking and its sorry aftermath, is uniformly strong. The album begins with the sound of wine bottles clinking and a sorrowful recitation, and ends with a paean to the bottle—and in between is pretty much the same. The sound flirts with the contemporary mainstream, but the arrangements and playing are still tough and hard, during one of the final periods in Nashville when such a blend was possible and before it became retro. Part of the appeal to me of this record is its reflection of the culture that bore it: popular country music has always had a stagy quality, but the mid-60s loosening of cultural inhibitions particularly encouraged theatrically social narratives and striking album covers such as Wagoner's. That these images look positively quaint to us now is part of their charm, as the artists were compelled to operate within a certain level of mid-century Southern decorum. Of course, Hank Williams and many others before him were writing and singing explicit songs about the dangers of drinking and the pitiable site of a drunk in the alley, but as great as many of those songs are I'm especially drawn to the 1960s cartoonish though earnest portrayals of these sad men and women. In this same period Hank Thompson was issuing themed albums devoted to drinking and its aftermath, and together these records reflect a certain Nashville era.

The liner notes on the back sleeve, "penned" by Skid-Row Joe himself, are worth quoting in full:

Sometimes it all comes back to me: a boy running through an open ﬁeld as free. as wild and as happy as the wind that is running beside him. His whole world being wrapped up in things that interest little boys—with no knowledge of just how cruel and cold life can be to one human soul.

And so it was as I grew older: the things that life has to offer always seemed to be offered to somebody else; and everything that I turned to always turned away, except this bottle of glowing wine. The contents of this bottle can let me be anything or anyone I desire. I can go back and once again be a little boy, or I can be a successful businessman, or I can live in a pretty little house with little feet running across the floor and children calling me “Daddy.” These are things that most of us want; but some of us can never achieve these goals for different reasons. Maybe were weak or we just have a problem that’s bigger than we are. It eats away at the mind until we can no longer face life alone. So...we turn to the bottle. It is so sad to have to depend on it in order to look the world in the eye and say. . ."Look at me...here I am!" But, sorry to say. I'm not proud of what I am.

P.S. Porter seems to know all about how we feel down here on the Row and he songs it to the point. (If I didn’t know him better, I’d think he was one of us.)

For added verisimilitude, the notes add Joe's "hand-written" signature, as shaky and woebegone as any alcoholic's from your most pitying dreams: 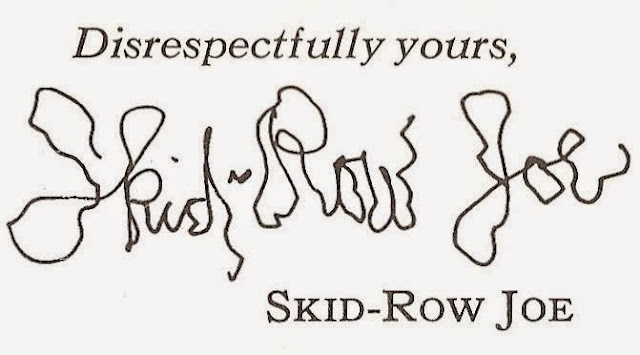 Pop a top to the era of Nashville concept albums:

Joe, you've gotta read Steve Eng's bio of Porter, A Satisfied Mind. It's a big, thick book but to me it didn't seem padded.

There's also "What Ain't to Be, Just Might Happen," Porter's concept album about mental illness with the classic "The Rubber Room."

Loving these posts on 60's country. A consumer tip: most of Kapp's output from then is great (especially Mel Tillis) and it's hard to go wrong with nearly any country record on Tower.

and those Lloyd Green steel guitar albums on Little Darlin' are good too.

Some early Paycheck coming up!