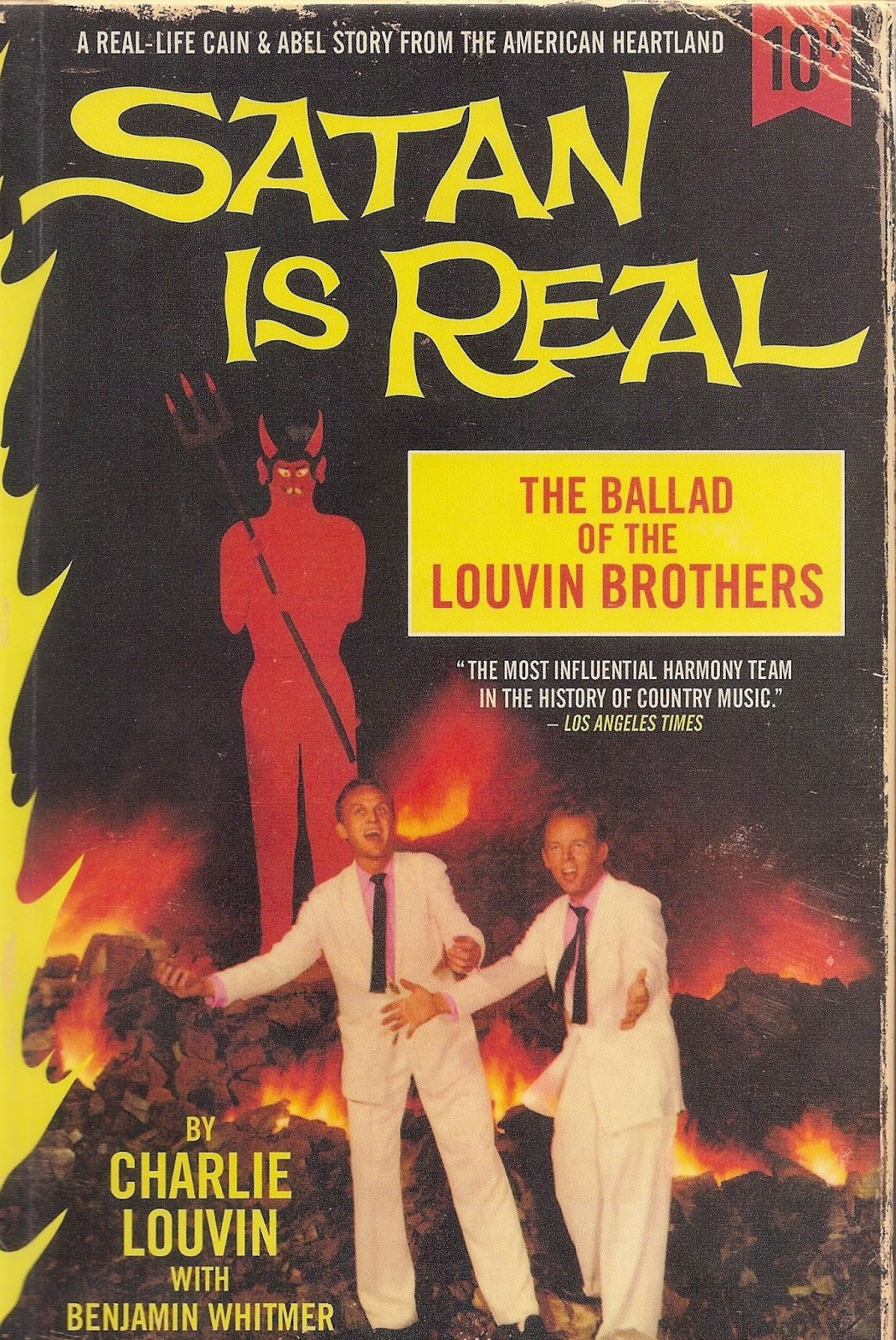 The Louvin Brothers' close harmony and songs about sin and redemption are legendary, and incalculably influential on modern and contemporary country music and bluegrass. Charlie Louvin's candid and direct 2012 autobiography Satan Is Real: The Ballad Of The Louvin Brothers offers poignant illustrations not only of older brother Ira's awful, destructive alcoholism and violent streaks but of the vast gap between song and deed, between the ideal and reality. Charlie's lucid, clear-eyed memories of and reflections on his brother's illness are contrasted by many of the songs the God-fearing brothers performed. Apparently for Ira, their music's moral landscapes existed only in melody and words; he found it impossible, or he was unwilling, to translate the songs' philosophy to everyday living. That old, old story.

In the opening chapter, "My Brother's Keeper," Charlies remembers, "My older brother Ira and I were ﬁnishing a stretch of shows, the last in Georgia, and we decided to stop by Mama and Papa’s place on Sand Mountain for a quick visit. Of course, we’d barely got on the road before Ira reached under his seat and pulled out a bottle of whiskey, and he drank the whole damn thing on the drive. When I pulled up to the house, I stepped out on my side, and Ira just kind of poured himself out on his."


Mama was out in the front yard, and you could tell how excited she was to see us. She came running up to try to hug Ira, but he put his arm out to hold her off. He was wobbling on his feet, barely able to stand upright.

She knew what was going on. Mamas know everything. “Aw, honey,” she said, “Why do you have to do this to yourself?” She wouldn’t even take Communion in a church unless they had grape juice instead of wine. She didn’t use alcohol and she didn’t understand anybody who did.

She should have known better than to say that, though. Nothing pissed Ira off like when somebody tried to put a little guilt on him. “Aw, leave me alone,” he said. “I ain’t hurting nobody.”

“Yeah, well, I don’t remember asking you,” he said, and tried to light a cigarette. He was so drunk he couldn’t even get his lighter to make a ﬂame. “Goddamn it,” he said.

Finally, he got his lighter to work, and he poked his mouth at the ﬁre to light the cigarette, but he missed.

“Your father’s in Knoxville,“ she continued. “I sure am glad he’s not here right now to see you like this.”

Ira threw the still unlit cigarette on the ground. “Will you shut up, bitch?”

I can guarantee you the fucking ﬁght was on then. I beat the shit out of him right there in the front yard. He was lucky it was just words, too. If he’d have touched her, I’d still be in prison. Shit, if Papa was there, he might have killed him anyway, but I just kicked his ass all over the place.Then I stuffed him in the car, and we drove away.

“I know you ain’t asleep,” I said to him once we got on the highway. He was curled up on his side of the car, holding his busted face. “I’m only gonna tell you this once. If you talk to her like that again, I’ll beat the shit out of you again. I’ll do it every time. You can lump it or try to change it, but that’s the way it is.”

“Oh, hell, I didn’t mean nothing by it,” he slurred. “That was just that old whiskey talking.”

“That ain’t no excuse,” I said. “Nobody forced you to drink that stuff. And you’d better not ever do it again.”

Then I stopped talking and just drove, fuming.

The family who prays, indeed.

In "Hank Williams," a devastating take on the titular honky-tonk legend's downfall, Charlie reflects, as he does elsewhere in the book, on the possible origins of his brother's tragic alcoholism. Was it to settle scores with his old man? With his mother? With his brother and singing partner? Or was the battle more epic than family:


I always got the feeling that some of those songs came from Ira understanding that he should have been a preacher, that maybe he’d made the wrong choice himself. From an early age, he was a regular prodigy when it came to scripture. He could recite chapter and verse of almost anything in the bible, too. He knew it all. And when he testiﬁed, the spirit of the Lord came upon him. Even when he was a kid, the whole church fell silent to hear him. There wasn’t a person on Sand Mountain who didn’t think he was gonna be a preacher when he grew up. Mama was very proud of him, especially since her father was a preacher. I don’t think there’s anything in the world that she wouldn’t have given for Ira to be like his grandfather.