"It takes a special kind of singing man to really make it in the Country & Western field. He has to have a big voice that can evoke a variety of moods and feelings—work or play, happiness or sorrow, love or lack thereof. He has to be able to put over a humorous lyrics, or build suspense, or simply create an atmosphere of down-home happiness."

This is all well and good, but the anonymous writer of these liner notes to Dave Dudley's Greatest Hits wonders about something more particular: "But what is it that makes Dave's songs such tremendously popular hits? Every good singer has a strong point. Dave's is his sincerity.... Dave is a 'method' singer, and he assumes the role that the song demands, totally and believably. Truck driver, miner, drunk, humorist, wanderer, errant husband, Dave always has the knack of putting the character as well as the song across."

To that list of characters I might've added, "Or all of the above." Dudley is most famous for his truck driving anthem "Six Days On The Road," but I'm especially fond of "Two Six Packs Away," a single from 1965, a brazen, rousing celebration of drinking and driving and the trees in the way, put across, of course, "sincerely." My favorite verse:

I told the judge there was two trees and I went between 'em
He said, "From what I hear your condition, that's the way that you seen 'em"
He laid down a hammer and he gave me ninety long days
I had a sweet little honey just two six packs away

Ah, the roadblocks placed before a man with a buzz and his girl at the end of the road.

"Two Six Packs Away" was written by Ronnie Self, a rockabilly artist who gained some measure of success in a vexed career; he wrote a clutch of terrific tunes, including "Sweet Nothin's" made popular by Brenda Lee (one of the first rock and roll songs I loved as a kid). Self was an alcoholic bitten often by bad luck, and perhaps some of his own sincerity bled into "Two Six Packs Away," which is sung with typical drawling jocularity by Dudley. The song is humorous, and played for laughs—the tempo is upbeat, and note the sly and knowing "yeah"'s that punctuate the background vocals. The lightheartedness of a driver measuring the distance to his girl not in miles or hours but by the number of beers at his feet is both of the era and slightly, and certainly entertainingly, disturbing. I love the unhappy menace that lurks beneath the surface of certain down-home country songs, the reality masked by whimsy. Pity the put-upon drunk, humorist, wanderer, errant husband. And it sounds terrific coming out of the jukebox. Great stuff.

I think that the ad Mercury Records took out in Billboard to promote the single captures the song's vibe better than any liner notes writer can. Nothing subtle about this: 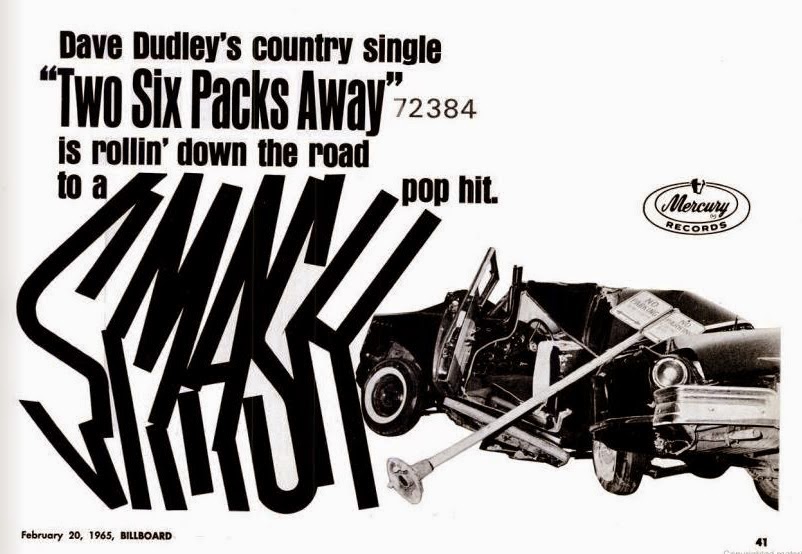