It's below zero in DeKalb, and gray. I just shoveled the drive. Did I mention it's cold?

Naturally, my thoughts turn to Roger Angell, who began writing about baseball for The New Yorker after he was assigned by his editor to visit Spring Training in sun-splashed Florida, in 1962. The result, his first extended essay on the game titled "The Old Folks Behind Home," ran in the April 7 issue. Though Angell was already an accomplished magazine editor, and the author of two books, the piece commenced his greatest career as America's greatest baseball writer. His visits to, and lengthy, evocative reports from, Spring Training composed one part of his annual three-part look at the game, which included mid-season and post-season wrap-up essays, a triumvirate of peerless reportage and writing that both nodded to and broadened each season's predictable and unpredictable forms, and which for decades became a welcome fixture in The New Yorker pages.

"The Old Folks Behind Home" was collected in Angell's first baseball book (The Summer Game, 1972) and it's a classic, at once observant, off-hand, and knowledgeable. All of Angell is here: his humor, affection, sly fiction writer's eye for detail, and conversational but elegant style is fully mature. Here's an excerpt from a characteristic paragraph, in which Angell deftly and sincerely moves from observing a game to observing something far larger and more complicated. "Watching the White Sox work out this morning at Payne Park reassured me that baseball is, after all, still a young man's sport and a cheerful one," he writes.


Coach Don Gutteridge broke up the early pepper games with a cry of "Ever'body 'round!" and after the squad had circled the field once, the ritual—the same one that is practiced on every high-school, college, and professional ballfield in the country—began. Batters in the cage bunted one, hit five or six, and made room for the next man. Pitchers hit fungoes to the outfielders, coaches on the first and third baselines knocked out grounders to the infield, pepper games went on behind the cage, and the bright air was full of baseballs, shouts, whistles, and easy laughter. There was a raucous hoot from the players around second when a grounder hopped over Esposito's glove and hit him in the belly. Two young boys with fielders' gloves had joined the squad in the outfield, and I saw Floyd Robinson gravely shake hands with them both. Anyone can come to watch practice here, and fans from nearby hotels and cottages wandered in after their breakfasts, in twos and threes, and slowly clambered up into the empty bleachers, where they assumed the easy, ceremonial attitude-feet up on the row in front, elbows on knees, chin in hands. There were perhaps two dozen of us in the stands, and what kept us there, what nailed us to our seats for a sweet, boring hour or more, was not just the whop! of bats, the climbing white arcs of outfield flies, and the swift flight of the ball whipped around the infield, but something more painful and just as obvious—the knowledge that we had never made it. We would never know the rich joke that doubled over three young pitchers in front of the dugout; we would never be part of that golden company on the field, which each of us, certainly for one moment of his life, had wanted more than anything else in the world to join.

Vintage Angell: joy blended with bittersweetness without a drop of treacle or sentimentality. No one writes about baseball in such a way. 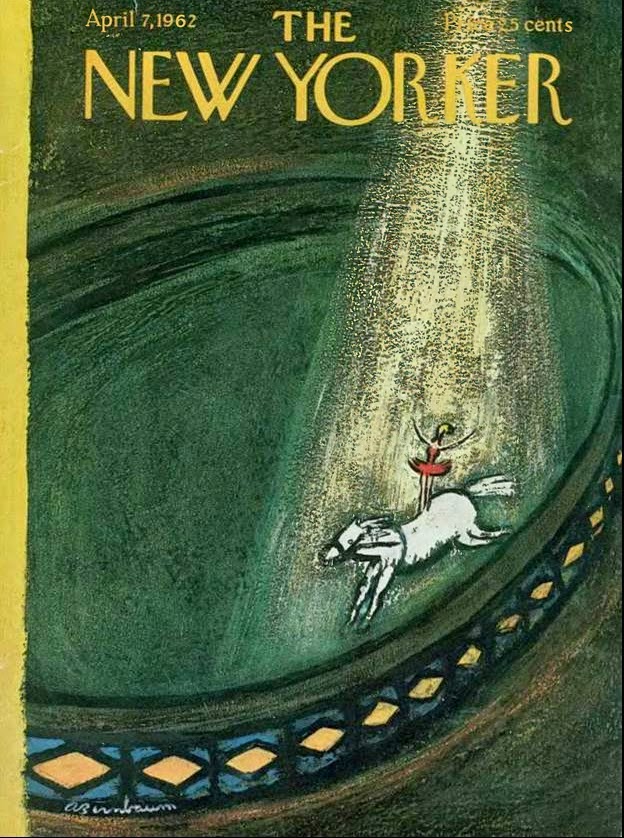 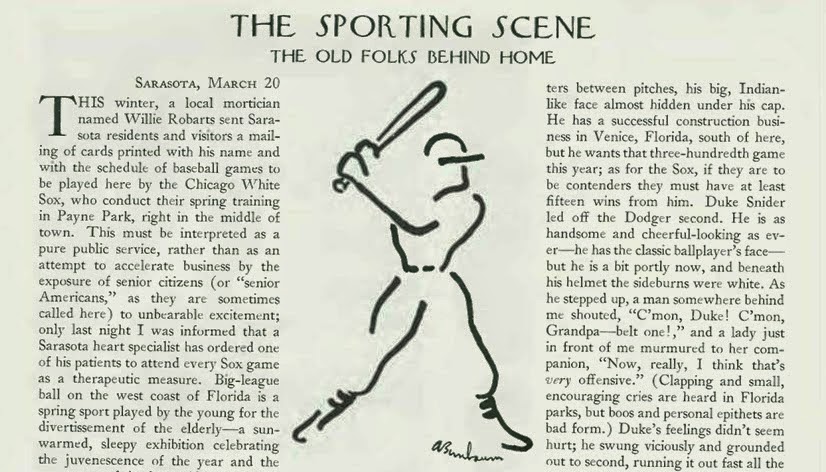 Exactly forty-one years later, in the April 7, 2003 issue of The New Yorker, Angell published what will likely be his final on-site report from Spring Training. In "Here Comes The Sun," a "Talk Of The Town" piece, Angell finds in the reduced editorial space something typically robust to explore. At age 83, he was in tune enough with the vivaciousness, looseness, and distractions of youth to observe a group of women celebrating one of the women's 21st birthday. The piece begins with a classic Angellian blend of fact and evocation:


With Opening Day gone by, a visitor to the recent spring-training camps can expect to keep no more than a handful of memories of the short season, such as a low line-drive homer in Tampa by the Yankees’ new import, Hideki Matsui, intensely annotated by a horde of visiting Japanese media; or a Mo Vaughn sailer at Port St. Lucie, over the right-field fence and into a sandpit, where it was excavated by an exclaiming pack of boy archeologists; or Renee Conley’s birthday party in Lower Box 105, Row D, at Scottsdale Stadium, in Arizona. Renee and four slender, well-tanned friends of hers—Laura McDermott, Angie Ray, Angie Cronk, and Ann Chaillie—were dressed in jeans, tank tops, and a scattering of forward-facing baseball caps, and their occupation of this sector, close behind the backstop screen, a bit over toward the visiting-team dugout, brightened the afternoon almost as much as the sun, which had been hiding behind chilly rain clouds for the past couple of days. The women put out the news that this was Renee’s twenty-first birthday, and Renee, bowing and blushing a little—she had cropped dark hair and a nice strong nose—accepted the good wishes of the old fans and kid fans around her but then said, well, no, she was thirty-one today. This seemed to put her about in the middle, agewise, in her bunch, who turned out to be servers from the nearby Bandera restaurant. “The best margaritas in town,” said Laura, who is a bartender there. “Only don’t go today, because all the staff will be rookies.”

The game began—the Giants were hosting a split squad of Seattle Mariners—but the young women were distracted by party-favor comical cardboard eyeglasses, with a jagged “Happy Birthday” in exuberant colors above the frames. Putting these on could be done only by reversing the caps, and once this was done, to cascades of laughter, it was time for a round of Bud Lights and the first of a dozen or so group shots, with the girls hugging up in a tight bunch and showing their perfect teeth to each helpful, “cheese”-urging neighbor fan wielding a borrowed camera. Fan parties can turn into a royal pain if you’re there for the game, but, c’mon, this was spring training, and it was a kick to see how rarely this part of Row D ever actually looked at the field.

Angell casually and affectionately eaves-drops on the women's conversation, noting their personalities and individual details, all while keeping one eye trained on a meaningless exhibition game.


“Ooo, look, the bases are loaded,” somebody said—we were in the fifth by now—but Rich Aurilia’s grand slam over the left-field fence was more or less missed because the friends were so busy with the birthday cake: two Hostess cupcakes, side by side, with a candle “3” stuck in one of them and a candle “1” in the other. Renee instantly blew them out, to a screaming that became part of the wild game noise as Barry Bonds, the next man up, delivered a monster blow over the berm in right. Nobody ate the cupcakes.

In short order the women are good-naturedly hit on by a cameraman, and one of them moves down front in the hopes of getting a game ball; she succeeds via the flirty promise of hugs and kisses.

"All that remained," Angell writes in the last paragraph, "was the next stage of the party."


Because of the anticipated beers, the young women had parked their cars at Renee’s place and safely biked to the park. The last party treat was a drawing of slips with various possible post-game destinations inked on them, including Zorba’s Adult Shop, on Scottsdale Road, and a long-shot Las Vegas. “We could totally do Vegas,” Angie Ray announced, but they all had to be back at work tomorrow. Laura was holding down three jobs between Thursdays and Tuesdays each week. Renee’s party would soon end, possibly wrapping up at Billet Bar, a nearby biker joint, with adjoining tattoo facilities. When the friends had last been in there, a bouncer said, “Next time, ladies, back your bicycles into the rack. That way you’re real bikers.” The ballgame was running out—it was 7-3, Giants, in the end—though nobody wanted it or the sunshine and hurrying warm clouds to go away. The night before, President Bush had announced that Saddam Hussein had two more days in which to depart or face war. But this was still spring training, where nothing counts. We had this one coming.

Baseball, sun, tipsy women, escape from the workaday world, and the promises of summer. If "Here Comes The Sun" turns out to be the last time Angell files a report from Spring Training—and I suspect that it will be—then what better bookends can there be: 1962 to 2003, Mantle to Matsui, pre-Beatles to post-9/11, and the timeless observations in the sun that run between. 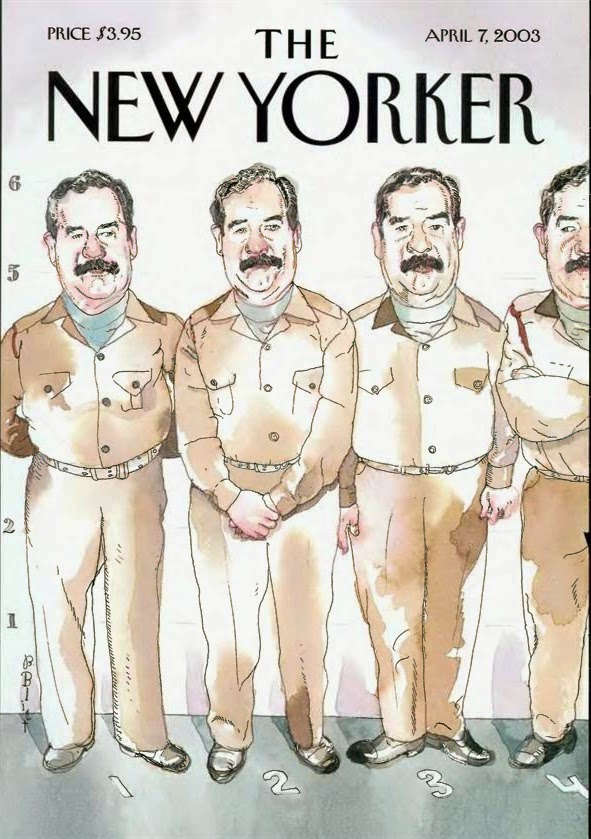 Photo of Roger Angell by Todd Heisle via The New York Times.
Posted by Joe Bonomo at 11:55 AM