After I first heard the magic of the Flamin' Groovies' "Shake Some Action" (on the late, lamented WHFS 102.3 FM out of Bethesda, Maryland) I embarked on a years-long, semi-obsessed quest to find the song. In the mid-1980s, if your local record stores (plural—it was still the Golden Age) didn't have the record and if the record was out of print, you were out of luck. I searched bins in Maryland, Illinois, and points between but couldn't find the Dave Edmunds-produced album. (I will find a way to get to you some day.) Eventually I located a German-issued 45 on LINE Records at Yesterday and Today Records, sometime in 1987. I sped home, threw the single on the turntable, and was vaguely disappointed. This wasn't the version I loved, the aural scripture, the bright, ecstatic song with the echoed, ringing, descending guitar phrase and the sweet but urgent harmonies. This was something else: ragged, unwashed, sounding like a re-recording of the tune. I loved Charlie Pickett and the Eggs' howling and reckless take of "Shake Some Action" on their Live At The Button (I write a bit about it in here) but their version, I felt, did what a live cover does, it pummeled a song, made it the band's own, whether that band's playing before 50,000 or 50, whether the band knew the song from their collective childhood, last year, or dad's album collection. I wanted to hear the "Shake Some Action" I knew from the radio—that old story. 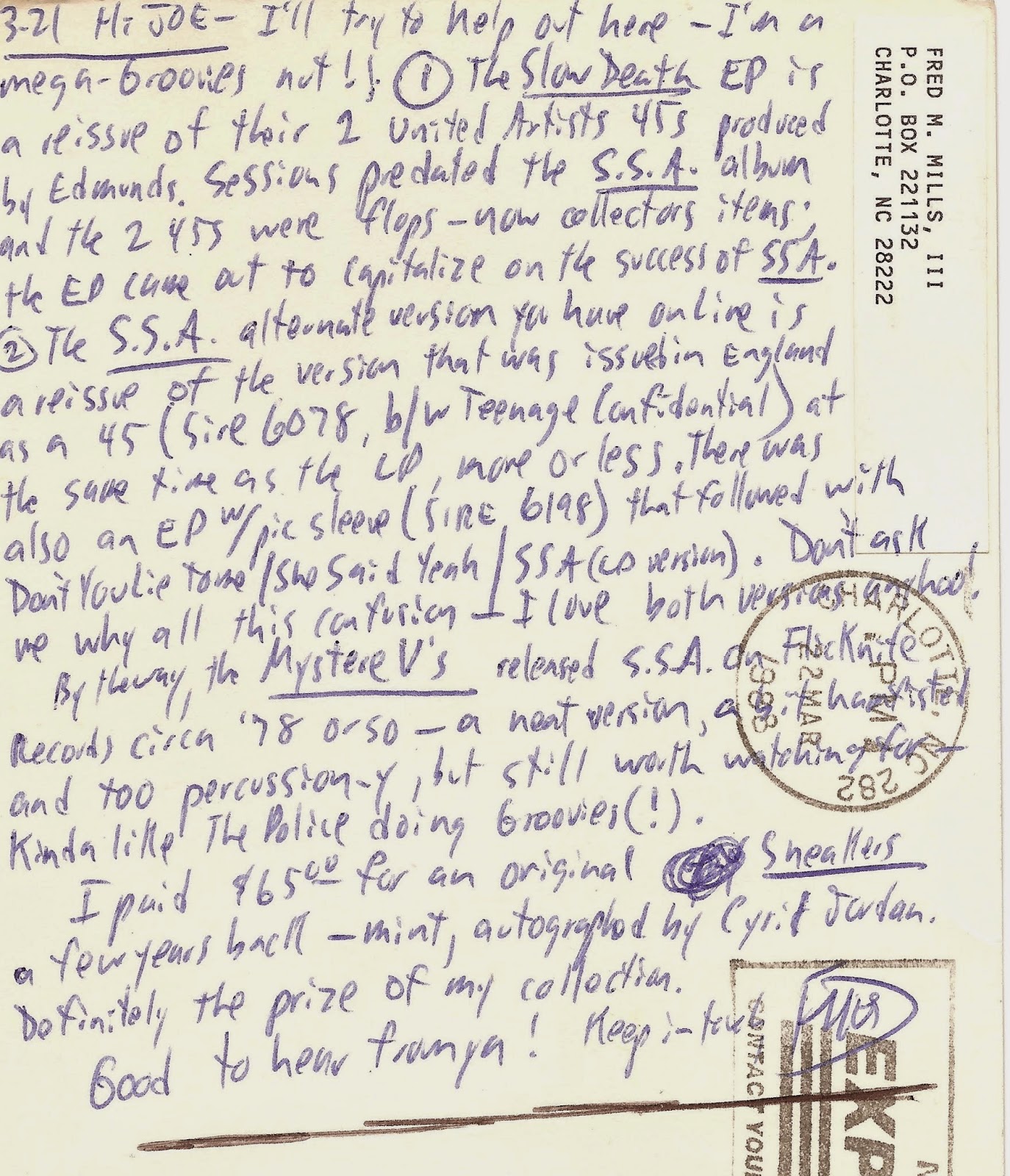 I wasn't even aware that there were two versions of the song; I needed some help. I wrote a letter to Fred Mills, whose music writing I loved in The Bob and other magazines. He wrote a postcard back (at left, a gesture of thoughtfulness and assistance that's still touching to me) and helpfully explained some of the discographical minutiae. (Thanks, Fred!) But I still wanted my "Shake Some Action," the shimmering one. I finally found Shake Some Action in a record store in Evanston, Illinois, but in the years that followed I couldn't shake the version on the LINE single; it kept shoving me from behind. It wasn't until years later when the information Mills supplied me gained larger context. In 2002, Norton Records issued Slow Death, a collection of Flamin' Groovies demos and odd tracks cut between 1971 and 1973 shortly after Roy Loney had left the band and when Chris Wilson (co-writer with Cryil Jordan of "Shake Some Action") had joined. The Groovies were in an oft-documented transitional stage in the early 1970s, between Loney-era roots rock and Jordan-envisioned 60s Brit pop. Idling and hustling for label support, they cut some tracks including, at Rockfield Studios in Wales in 1972 with Dave Edmunds producing, the album version of "Shake Some Action" and the classic "Slow Death," the latter of which was swiftly re-mixed and issued as a single a year later. In Hollywood in the summer of 1973 the band recorded another version of "Shake Some Action," a demo that shadily wound its way among bootlegs and labels and licenses and ended up in my hands in the mid-80s. Over time, I've come to treasure this version, now neck-and-neck to my taste with the version recorded with Edmunds and released on the 1976 album of the same name.

In his liner notes to Slow Death, Jordan writes that the Hollywood demo of "Shake Some Action" remains his favorite track. I hear its glory now; I was listening with the wrong ears in the 80s. The album version is shiner and more compact a production, if a song this explosive can be considered compact. Jordan's and Wilson's guitars ring and David Wright's snare pops and his cymbals shape gorgeous halos. But what's implied in the album version is made passionately explicit in the demo: in the final moments, Jordan and Wilson sing "Shake some action / down on me," and it's that plea to the heavens, that glance upward, that redirects the song's passions—and redefines them. It's as if the shimmering production values on the album version were pious misdirection, where the urging in the demo version feels dirty, desperate, and all the more necessary. Though Jordan layered the acoustic guitars on the demo to achieve a mandolin effect, they're still rag-tag, loose, more lived-in than the studied, well-rehearsed electric guitars in the album version.

Demo versus polish, a body before a cleansing, a body after. For me, it's a draw as to which version of "Shake Some Action" is greater. And a draw it will likely remain.

Fred Mills is still a "mega-groovies nut." He's written about the band many times, notably here at Blurt, the magzine he edits.


Photo of the Flamin' Groovies and Dave Edmunds by Paul Slattery from the Mike Wilhelm Collection. Via Mike Wilhelm.
Posted by Joe Bonomo at 12:26 PM